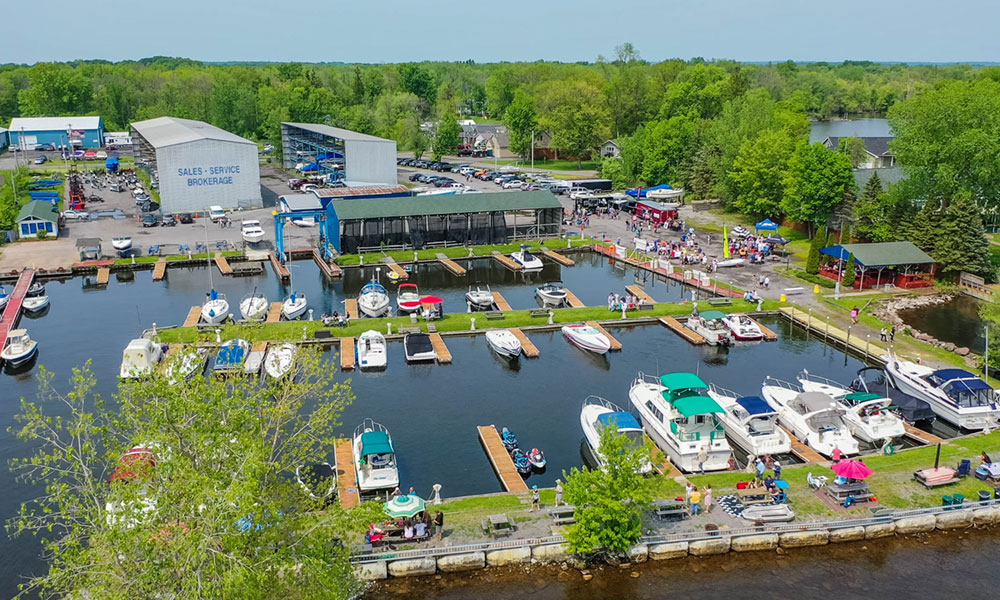 43 North Marina, LLC, located in the town of West Monroe, is adding 28,500-sq-ft. for boat storage, office space, a showroom and sales department for parts.

‘All these projects are examples of great growth in Oswego County. That growth is a much-needed positive sign during the pandemic. It’s proof of our strength, courage and perseverance as a community.’

Oswego County has seen its share of new construction and expansion/renovation projects recently. Below are project descriptions and photos from many of these projects. These projects represent significant investments in and job creation for Oswego County.

• R.M. Burritt Motors, Inc. constructed a Chrysler/Dodge/Jeep/Ram dealership adjacent to its Chevrolet/Buick dealership in the city of Oswego. The 38,000-sq-ft. expansion includes a 7,800-sq-ft. collision center. The $7.6 million project will create 36 new jobs.

• White Pine Commons is being developed by S & S Premier Realty in the village of Phoenix. The $1.2 million, 12,000-sq-ft. project includes commercial lease spaces from 1,200 to 3,600 square feet, along with a common area equipped with a full commercial kitchen. This common area will be able to be rented for meetings, weddings, banquets and other events.

• The Litatro Building is a five-story mixed-use development in the city of Oswego. The project consists of 7,500 square feet of commercial space and 22 residential units overlooking the Oswego River. The $5 million project was part of the Oswego Downtown Revitalization Initiative.

• The Maples Assisted Living Facility acquired the former Michaud Nursing Home in the city of Fulton. The project involves its conversion into an 80-bed assisted living facility. The 41,000-sq-ft. building has two floors. The $4.1 million project will create 30 full-time and 15 part-time jobs.

• East Lake Commons involves the demolition of the Mid Town Plaza in the city of Oswego and the construction of a 75,000-sq-ft., five-story mixed-use building with 70 apartments and 3,300 square feet of commercial space. The apartments will be a mix of market rate and affordable units. The $25.4 million project will create 16 full-time and 12 part-time jobs and is part of the Oswego Downtown Revitalization Initiative.

• Construction Design and Management, a building developer, constructed a 9,000 square foot facility on the former Nestle site in the city of Fulton. The $1.4 million project was developed for Spectrum.

• Harbor View Square will be an 86,000-sq-ft. mixed-use complex with 75 market-rate apartments, 10,000 square feet of retail/commercial space and 18 townhouses in the city of Oswego. The developer is Housing Visions Consultants Inc. of Syracuse. This brownfield redevelopment project represents a $20 million investment, eight jobs and 77 construction jobs.

• EJ USA, Inc. constructed a new 71,300-sq-ft. manufacturing facility on a 15-acre site in the Oswego County Industrial Park in the town of Schroeppel. The facility is a steel and aluminum fabrication plant and a distribution center for the northeast. The company manufactures infrastructure access products such as manhole frames, grates, covers, hatches, etc. The company’s headquarters are based in East Jordan, Michigan. The $9.1 million plant employs 91.

•  22 Crossroads is the development of a 44,000-sq-ft., four-story mixed-use building with 32 apartments and 5,500 square feet of commercial space in the city of Oswego. The $6.9 million project was part of the Oswego Downtown Revitalization Initiative.

• Oswego Health’s Behavioral Health Services acquired the former Price Chopper building in the city of Oswego from the County of Oswego IDA. They are currently transforming the property into a new BHS complex. The $17 million project will create 25 jobs.

• Bella Fattoria, Inc. expanded its agribusiness with a new 5,536-sq-ft. winery operation located in the Town of Hannibal. The facility includes a production area, a tasting room, a small kitchen, cold storage and equipment storage. The new winery plans to offer 10 wines and nine ciders. They have been producing hard cider since 2014. The $732,046 project created six jobs.

• Strategic Domains, LLC acquired and is renovating a 7,560-sq-ft. building in the city of Oswego. This mixed-use project will house a coffee roasting facility, a coffee and ice cream shop, as well as two apartment units. The $950,000 project will create 10 new jobs.

• CGP Acquisition & Development recently purchased 1.35 acres in the town of Albion and has built a Dollar General store. The store opened in early September. They expect to employ six to 10 people.

Several of the projects, above, are part of the city of Oswego’s Downtown Revitalization Initiative (DRI). As the first-round winner of the DRI for the Central New York region, these projects are well underway. The city of Fulton was the fourth-round winner of the DRI for our region. They are at the beginning of the process and we look forward to seeing those projects get started.

All of these projects are examples of great growth in Oswego County. That growth is a much needed positive sign during the pandemic. It’s proof of our strength, courage and perseverance as a community.