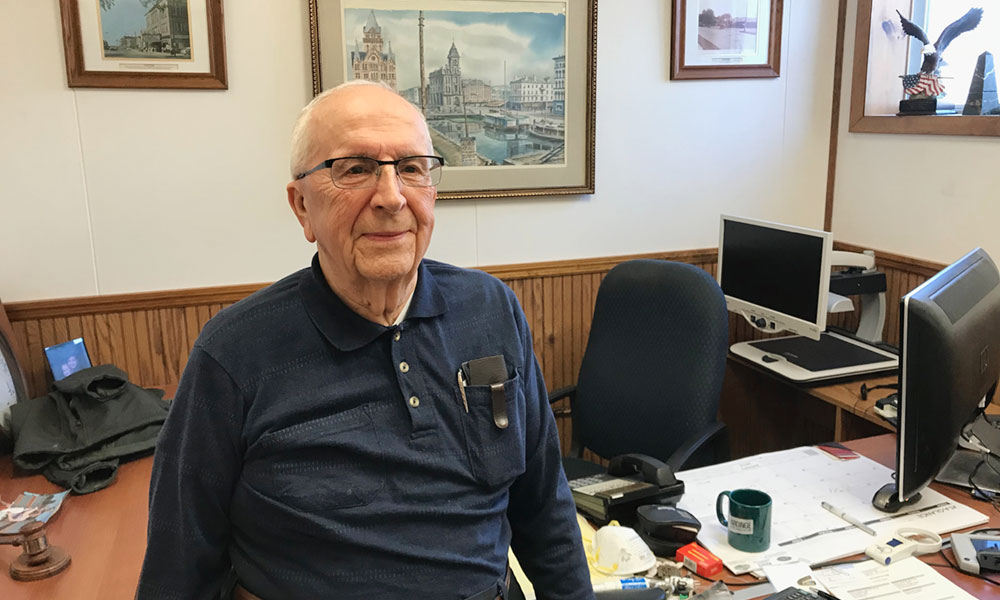 At 94, co-founder of Fulton Tool Co. reminisces about his many years in the machining industry

Q.: You are a native of southern Ontario, Canada. What brought you to the States and to Fulton?

A.: I went into the Canadian Air Force when I was 17½, and when I got out, I went into business with my father, William. He was in the farm supply business, and during the Great Depression, most of that was done by trade. The village I came from had two cars, about 100 people and one doctor. A farmer had products to sell, such as maple syrup, and my father would trade items such as a double harness, plow or stanchions, or whatever a farmer needed. That was basically how people operated back then, and it was good experience. I had a canoe, and when I wasn’t working, I would paddle along the lakes in southern Ontario doing a little fishing and looking for girls. I saw a couple up on a bluff and one of them waved to me. I turned around and went back, and that’s how I met my wife and soul mate, Barbara. She was from Fulton, and we were married for 66 years.

Q.: Did you have the means to relocate?

A.: We did quite well in business. My father gave me washing machines as part of the products I sold and made profits on, along with refrigerators, stoves and oil burners, that kind of thing. When we relocated to Fulton, we had enough money to buy a house.

Q.: How did you become involved in the local machining industry?

A.: We came to Fulton in 1947. From there, I served an apprenticeship in the Sealright machine shop. That’s where I met my future business partner, Ed McGuane. After that, I worked for a company that did time study systems, and we time studied machine shops, setting up standard times. The time study experience helped me to understand how long it took to make parts. In 1949, McGuane bought a company that made self-closing barrel faucets. The first market we got into was mail order, which became very popular. We did well with mail order and that became our best marketing method. We also exported to Switzerland — 10,000 units twice a year — and we shipped into Sweden several times. We had that business until 1973, and it was constant. I sold it to a company out of Ohio that is still running over in Manchester, New York.

A.: I then became an estimator with the Black Clawson Company, which made paper-converting equipment in Fulton. By the time I arrived at Black Clawson, I had a pretty good background and was able to price things.

Q.: When did you launch Fulton Tool Co.? How did you acquire your first clients?

A.: In 1959, we took on another partner — Joseph Metibier — and started the Fulton Tool Co. Our first customer was Black Clawson, which was fortunate because I was there to make sure it happened. The following year, I went full-time with Fulton Tool and did the marketing, which I liked to do. We expanded and produced parts for the military. However, in the early 1980s, we were out of work. There were only two places in the country that were busy — one was in Dallas-Fort Worth and the other was Oklahoma City. I flew down to Dallas with my National Tooling & Machining Association membership book, and met with John Connolly, owner of Connolly Tool and Machine Shop. I went into his office and introduced myself, and he asked, “What are you here for?” I said, “I have to have work.” He said, “I don’t have any extra, but you’re a nice guy. I’m going to make some appointments for you.” I was then hired by Optic Electronics and worked with them for 20 years. We made the periscope for the M-60 tank.

Q.: How did you finance the launch of Fulton Tool Co.

A.: We financed Fulton Tool from the profits we had made with our original metal products manufacturing company we started in 1949. We also took mortgages out on our homes to help finance it. We didn’t have a lot of money but people took care of you back then. The banks were not good to us and were very difficult at that time, but we had to do business anyways. I would go to see Saul Alderman, a Fulton business and civic leader, for advice and loans. When I had some business decisions that I had to make, I would go talk to him. He was like a father. There were a lot of people like that who would help. Operation Oswego County is probably one of the greatest things that happened to the county. Thanks to them, we found new ways to finance and get with banks. I don’t think we would have made it without Operation Oswego County.

Q,: Can you talk about the devastating fire that leveled the business in 2003?

A.: We’ve had some great times at Fulton Tool and some bad times. We had a fire in 2003 that totaled the building. While devastating, it turned out to be good for us because then we had the opportunity to ask, “What market do we really want to work in?” and then we would tool for that market. There’s times that has paid off and other times when it’s been a little difficult. The market treated us well and things turned around.

Q,: Did you have good insurance coverage at the time?

A.: Jane Garvey, our office manager, worked for us before the fire, and said to me, “You have got to have the right kind of insurance.” She advised me to add replacement cost to the policy for a small increase in premiums.  We had one of the new machines — a horizontal CNC mill — that I don’t think cost anymore than $50,000. When we replaced those, we got equipment that was worth $500,000. Looking back at that time, we collected $5.8 million in insurance that went toward a new building, replacement equipment and payroll. That gives you an idea of how important it is to have right people at the right time working for you.

Q.: What technological changes have changed the landscape of the machining industry?

A.: In the old days, there were three handles you had to crank before locking up a machine and doing all the things you are supposed to make quality work. Today, the part is programmed before it hits the shop. The program is put into the computer on a machine that follows that program. Once in a while, there will be a mistake that has to be corrected. We have made parts on those machines with 200,000 bits of information in them. Knowledge doubled from 1850 and 1950, and it doubled again in the ensuing 15 years. From that point, it’s doubled every five years. By 1995, knowledge was doubling every 72 days. I had a crank telephone on the wall when I was a kid. Today, we have phones that probably have more information than any of the biggest computers IBM ever made back in the day.

Q.: What are your plans for the future?

A.: I never planned on retiring. I came out of a merchant’s family, and a merchant doesn’t retire. I don’t work as hard as I used to. I work mornings from 8-11 and afternoons from 1-3. Fulton Tool is going to continue whether I am here or not. There are 48 machine shops in Oswego County, and right now my dream is to see a school in Oswego County that will teach machinists. It always happened at BOCES, and they turned out some of the greatest people you can have, and I still have one or two that were trained at BOCES. There was a time when we went to BOCES and hired just about every graduate. I’ve invited the association to come in and talk to folks, and I’d like to get a school going. I can get the curriculum from Ohio University, and I’d like to be able to train people on blueprint reading, machining and estimating. It’s a 10-week course that can be done over the web. We have skilled people, but many skilled people are retiring. We are fortunate in that we brought on six people last year, and have been able to train three. They have become good operators. I would like to be able to bring on six people and keep all six. Right now, we are making the engine for the M-60. That is one of our larger jobs that runs every day on several machines. We are backed up more than a year on that work. We have a good management team, and I think that is why we are doing so well.

A.: I’ve had trouble with balance, and suffer from macular degeneration that results in impaired vision. I use a screen reader to read text on a computer. I have a private trainer that I work with twice a week.