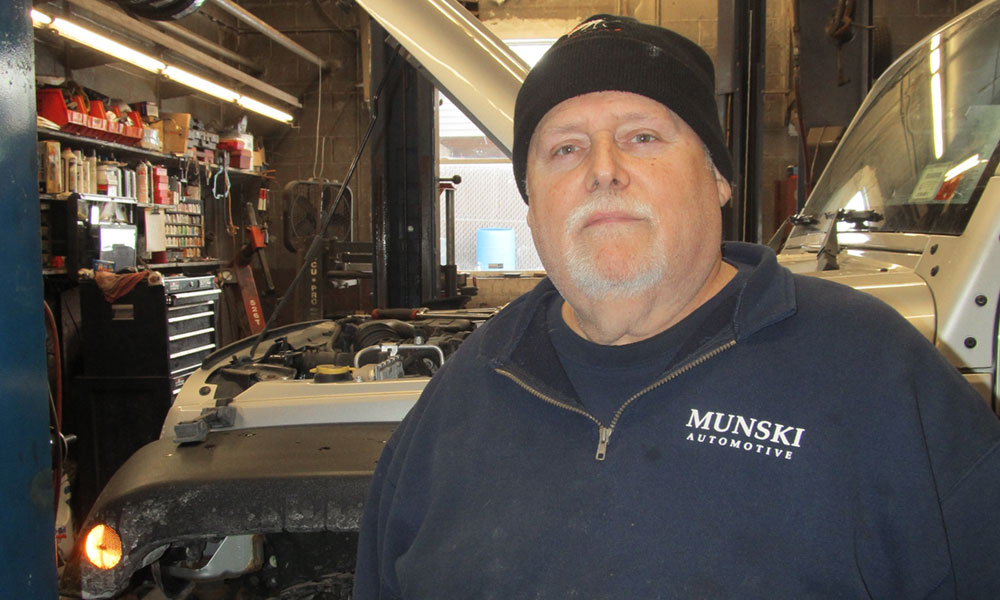 Longtime owner of Munski Automotive in Oswego started his business 28 years ago. He reflects on his success, longevity

Q.: At what point did you decide to embark on your own?

A.: Prior to starting my business, I worked at Oswego Nautical on West First Street for about five years. When I heard the owner of the CITGO gas station at West First and Seneca streets was planning to retire, I agreed to take over the business on a land contract. I took over what small clientele the former owner had. He was getting pretty old and there were no gas pumps there anymore. He was doing handfuls of oil changes and fixing tires, but there wasn’t a whole lot going on. We opened at this location on Aug. 1, 1992 and are in our 28th year of doing business.

Q.: What was your inspiration to going solo?

A.: I got tired of people telling me to do something the wrong way. I had seen the wrong ways of doing it, so I asked, “Why don’t we go do it my way and see how it plays out?” It’s about having the first and final say about it, because if you’re the one responsible, you’re the one who has got to have the say. Prior to creating my own business [and prior to working at Oswego Nautical], I worked at Monroe Muffler, Gunn Buick, Bresee Chevrolet and I owned and managed Midas Muffler on East Seventh and Bridge streets. I started back in 1974 at Miceli Gulf here in Oswego.

Q.: Your location is in a long-time commercial district. Do you know some of its history?

A.: I believe the former owner was here since about 1979. I’ve been here the longest. What is unique is that I am the 79th owner of this property. While doing construction work across the street, a worker found a 1908 calendar, and featured on it was an import-export business specializing in beer, wine and smoking tobacco. The business occupied five addresses in one giant building that was located where my shop is today.

Q.: How did you finance the launch of your business?

A.: I pretty much launched it with a paycheck from Oswego Nautical. What was nice is that all the parts houses knew who I was. So when I went to them and said, “I need a charge account. This is what I’m doing,” their answers were, “No problem.”

Q.: What was the most significant challenge you encountered when you first opened the shop?

A.: One of the biggest challenges I faced when we first opened was getting this place clean. It was an absolute disaster. Inside, the floors in the bays were covered with thick grease. We tried pressure washing it, but all it was doing was cutting lines in it. We were using roof torches to warm it up, then scraping it with ice choppers. The biggest thing I harp about around here is keeping the floors clean, because then we don’t have to worry about getting customers’ cars dirty.

Q.: What do you believe is the key to business success?

A.: Customer satisfaction. We give them more than what they expect. A lot of technicians say, “Yeah, we can try.” My response is “yes.” A customer will say, “People don’t even want to tackle this.” I’ll say, “I’m good. I’m not afraid.” We’ll take on any job within reason. Time and money are what drives business, and some jobs are not worth doing because they are not worthwhile for both the customer and us. If someone comes in for a belt change and as long as it’s not storming or pouring out, we’ll go outside and do it. If someone comes in with a check engine light on, we’ll go out and scan it and have a conversation with them.

Q.: How do you go about getting customers?

A.: It pays to spend a couple minutes of your time to gain the confidence of somebody so they will come back in and fix it. We want to ease their mind and indicate to them that the problem is not as bad as they think and their car will be safe to drive. You build it; they will come. You do a good job; they will stay. In Oswego, Tom tells Joe, and Joe tells Pete, and Pete mentions it to his wife, and the wife mentions it to her girlfriend. It goes on and on. We just tried not to burn any bridges.

Q.: What are some of the major changes you have seen in the automotive repair business through the years?

A.: The independent shops are getting few and far between in town. In more cases than not, it seems like independent shops will go out of their way to help you. The biggest change over the years has been the rise of technology and the internet. You get people calling and saying, “I was online and I found this and this. So what do you think?” And I’ll say, “What do you want me to say? The internet just told you what’s wrong with your car. You want to believe that or do you want to have someone look at it and find out what is wrong?”

Q.: Can you give us a sense of the cost to keep pace from a technological standpoint?

A.: A $2,000 scanner is now an $8,000 scanner. We also have to do a lot of monthly updates and software revisions. We went from having one computer controlling the whole car to four of them doing it now and all talking to each other. The biggest thing is to find out what part of it doesn’t want to talk. We spend several hundred dollars a month for software. The shop management software, which handles invoicing and estimating, is all internet based and used to be free if you were a Standard Plus member. Now, it’s $65 a month. Our repair software is Mitchell On Demand, which costs $170 a month. The updates for our scanner each month cost $118.

Q.: Can you talk about the people that have worked for you over the years?

A.: We’ve only had a handful of techs over the 27 years I’ve been in business. My tech now, Lyle Ernestine, has been with me for 10 years. Some of them thought they would go on and run their own business. However, just because you’re a good wrench doesn’t mean you can run a business.

Q.: Is it hard to find good employees?

A.: We used to have people sitting at a desk answering phones, writing estimates, doing invoices and ordering parts, but it’s very difficult to find somebody to do that job. We’re not afraid to spend money here for salaries, but none of the kids coming out of school want any part of physical work or manual labor. They just want to sit at a desk and type on a keyboard. I don’t know what they want, but they really don’t want this. If you have a good tech, you need to make sure everything is peaceful around them and not ruin their life by being an ass at work. It’s rare if not impossible to get young people interested.

Q.: Do you think it’s a matter of how much the position pays?

A.: You hear on the radio in the morning how automotive businesses are looking for technicians. They are actually just looking for people to change oil in cars and a chance to try to mold somebody into a more advanced position. But younger people don’t even want to go in there. When I started, I was making $6 or $7 an hour. Techs today are paid $20-plus an hour. I mean, how would you like to be 8 to 5 five days a week, knocking down $40,000-plus a year and not having to worry from 5 at night to 8 in the morning about anything?

Q.: You were heavily into marine repair in the early days. Are you still working on boats?

A.: We used to work on boats when I first opened. I had the knowledge and knew people in the area, and it wasn’t hard to have work. Most of the time, we had six to eight of them sitting here at the lot, and we were running service calls all over the place. We had so many boats and nautical equipment here that people wouldn’t bring their cars in thinking we didn’t have time to work on automobiles. I still do boats for a couple of good friends that have been coming to me since the beginning. In 2013, we stopped working on boats on a regular basis after remodeling the office. I dragged everything out of here and never brought it back, and also sold my boat that spring. I thought it was a good time to stop working on boats.

Q.: After all these years of work, what do you envision as being your ideal retirement scenario?

A.: I’m always threatening by saying I’m done, but every time I take time off, it drives me crazy. I’m just not ready yet. We took off from Dec. 20 to Jan. 2, and it was probably the worst vacation I ever had. One is I couldn’t go anywhere because we commercially plow, but we didn’t have any snow. It’s hard to walk out of here and do that. Lyle needs a paycheck, and whatever time I take off, I pay Lyle to take off as well. Being that we can’t get anybody to work at the front desk, we really can’t change the way we do things. It’s easier for both Lyle and myself to take time off at the same time.