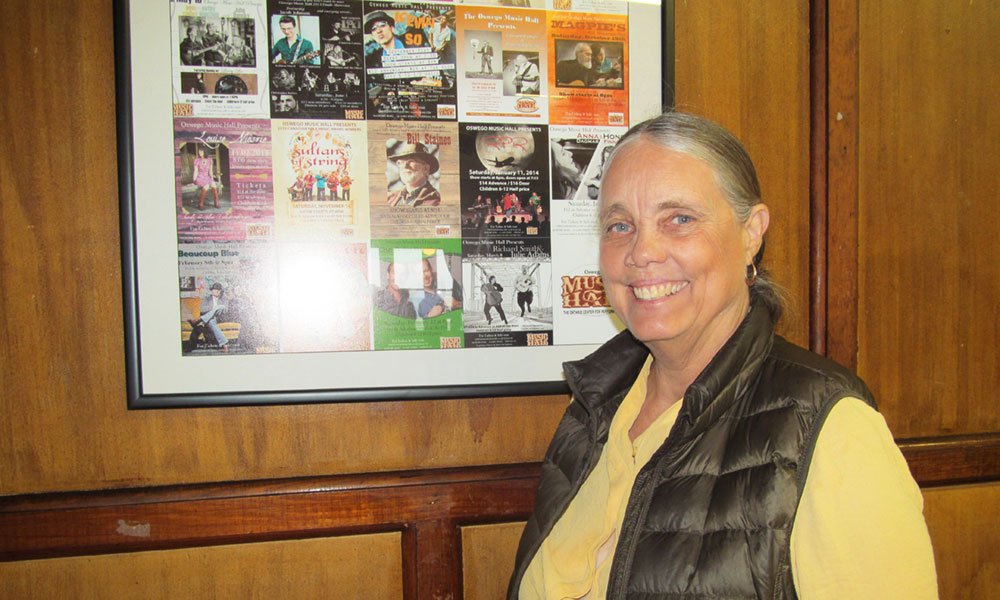 Artistic director for Oswego Music Hall, also known as the Ontario Center for Performing Arts in Oswego, is passionate about bringing music and performances to the region

Q.: Oswego Music Hall has been in existence for more than 40 years. To what do you attribute its success and longevity to?

A.: Community. Perseverance. Passion. Expertise. Embedded in our volunteer leadership, these are the key attributes that have sustained us.

Q.: Can you describe what your role is as artistic director of the Oswego Music Hall?

A.: I book the acts for the national stage. We initially see the acts live, often traveling to major festivals and conferences to recruit top-notch performers and discover emerging artists. Once scheduled, I communicate performer needs to all other departments — in sound, technical, promotion and hospitality.

Q.: Both you and your husband Mark have been instrumental in the growth of the Oswego Music Hall. What has motivated you as a couple to support the organization?

A.: We began our lives as a couple of college students majoring in art. When Mark got the job as a student to design, build and convert the campus post ofﬁce into The College Tavern (back when the drinking age was 18), he hired me as one of his carpenters and also introduced me to the world of theater. I became involved again with Oswego Music Hall when its members decided to donate proceeds to the Retired and Senior Volunteer Program, the charity I directed. We both became dedicated board members and close friends with other families doing the same — working together and playing together as a team of community leaders.

A.: We began the year with novel programming when Gangstagrass — a band melding bluegrass and hip-hop — packed the house before an audience of all ages. At the same time, we received an award to pilot a guest curator series that will enable innovative programming by entrepreneurs for the beneﬁt of youth and other underserved demographics. On the horizon is a feasibility study to erect a performing arts facility on the waterfront in Oswego and we are pleased to have members of our board at the table and in on discussions.

Q.: Can you describe the demographic that attends performances?

A.: We’re family friendly and welcome all ages and skill levels. Each of three stages draws a greater concentration of one demographic over another. Our national stage draws a stronger mix of professionals and retirees — people who tend to have more discretionary time and disposable wealth. The Hook Singer-Songwriter Series draws a greater percentage of GenXers and millennials — typically local, emerging artists often supported by their younger friends and family. Open Mic Fridays attract all ages, often entire families, and the youngest mix of performers and audience. A key draw, especially for the younger demographic, is affordability and the opportunity to perform using state-of-the-art sound equipment run by bonaﬁde sound engineers and technicians.

Q.: How does Oswego Music Hall financially sustain itself?

A.: Our nonproﬁt status has helped us secure grants from the New York State Council on the Arts to subsidize artist fees and the Shineman Foundation to fund technical upgrades. We’ve been all-volunteer run for 42 years and the membership sustains us between shows. Most importantly, Central New Yorkers support live music by coming to shows. It’s a community effort. The city of Oswego provides performance space and storage, river’s end bookstore is our downtown ticket outlet, Quality Inn houses performers and Azteca Restaurant provides them dinner. Ontario Orchards and Green Planet Grocery donate concession supplies and countless other businesses display our ﬂyers and posters.