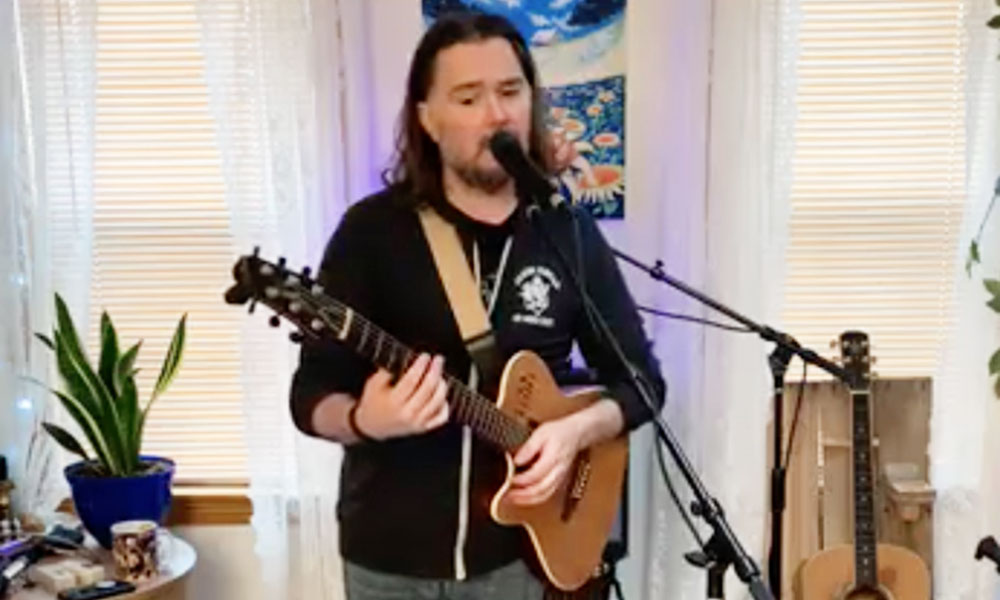 Stayin’ alive? Musicians go on in the time of pandemic

‘When music is your lifeblood and your livelihood, the show must go on. That’s what performers and the places that host them are learning, and adapting to.’

In normal times, Tuesday nights are a highlight for John McConnell and what has become a local musical family.

For decades, Old City Hall (OCH) on Water Street in the Port City has held Open Mic Night, hosted for the past decade by the amiable McConnell and featuring musicians of all types, skill levels and walks of life. But the sudden shift caused by COVID-19 has disrupted life for every participant.

“I’ve formed countless relationships at that gig and OCH will forever be one of my homes away from home,” McConnell said. “I miss performing in the space next to the wood stove and I miss listening to my friends and fellow open mikers perform there too.”

But when music is your lifeblood and your livelihood, the show must go on. That’s what performers and the places that host them are learning and adapting to.

Now McConnell’s Tuesday night involves a live Facebook performance with an opportunity for viewers to tip if they so choose — it’s “accepted but not expected,” he says at every show.

Cam Caruso, normally a Tuesday open mic fixture, performs similarly on Mondays. Also on Monday nights, McConnell provides music while his partner leads weekly Yoga With Becky sessions. Many local musicians and others have gone online to make up for lost revenue, while some of the open mic’s amateurs — this writer included — perform regularly online to keep their creativity and connections flowing.

For musicians like McConnell, the sense of community is something they miss as much as the income from the gigs.

“I miss gently encouraging newbies to sign up and play a few tunes,” he said. “I miss getting humbled and blown away by a random performance from someone passing through town for work who heard that Old City was the spot on Tuesdays. I miss grabbing a pint after I’m all set up for the evening and I miss walking around from table to table to give and receive hugs, handshakes and weekly updates.”

Juliet Forshaw — who teaches in the SUNY Oswego music department and performs with musical and life partner Michael Judge in the theatrical duo Avalon — said the pandemic has accelerated trends in the industry and society.

“More and more of commerce, entertainment and social life has migrated online in the last 20 years,” Forshaw said. “The primary way that a lot of people consume music is by themselves with earbuds. This mandatory break from live music gives all of us, performers and listeners, a chance to ask ourselves if this is a trend we wish to continue when our society goes back to ‘normal.’ My hope is that we will all come out of this with a renewed appreciation for in-person interaction and physical presence.”

Avalon had just released a new album, “My Evil Plan,” this spring, but had to postpone performances and promotional activities. During the pandemic, the duo has taken the time to write new material. While disruptive, this stretch provides an opportunity for musicians to reflect and reconsider their activities.

“In the short term, for many musicians, this break will be a chance to pioneer new ways of collaborating, performing and promoting their music,” Forshaw said. “I have great faith in their inventiveness. This will also be a quiet time for musicians to think deeply about why they have chosen to pursue music. We might ask ourselves, ‘What am I trying to accomplish with my music? Am I still willing to do it even though it just got a lot harder? What does the world need right now?’”

McConnell also has found silver linings to how his life has changed under the COVID-19 dark cloud.

“First off, my body and voice have been enjoying a period of rest and recuperation,” he said. “Playing music for a living can be a lot of fun but it’s tougher on the body than many folks think; especially at this level where I’m a one-man-business who’s responsible for setting up, tearing down and performing as many as seven three-hour to four-hour gigs in a week.”

‘My advice to fellow musicians and to myself at this time is to keep the faith and to keep learning more about all of the ins and outs of performing online because that’s the future and the future is here.’

McConnell said this has provided more time and energy to write new material and learn new cover songs, and concentrate on other aspects of his business. But it’s also allowed a more rewarding personal life.

“My typical work hours usually interfere with family time so we have been enjoying many more opportunities to hang out together,” he said. “I’ve been cooking more than ever and I can’t remember a time since the 1990s that I’ve sat down so frequently to dine as a family.”

While Marc Warner is retired and doesn’t worry as much about the bottom line of the 20-plus gigs he’s missed, the bigger impact might be on events like the regular evening he hosts at the Hannibal American Legion the past few years.

“It grew into something I never expected,” said Warner, who along with bassist Tim Stone, regularly welcomes guest artists for a Wednesday highlight that helps fund the legion’s activities. “We had a neat space going, and a room where people try to be quiet and listen. The legion series is a community-driven thing.”

Warner performs solo gigs, as a duo called The Hokum Brothers with Kevin Barringer and in a combo called The Cool Kids with Stone and rotating players. He misses the camaraderie and the joy of making music, but still finds ways to scratch his musical itch.

“This situation has brought forth a new dynamic where when I have an urge to present something, I turn on my tablet and put it out there,” he said. “It puts the distribution in everybody’s hands that way. Guys I would pay money to go see, I can see them during the week, almost any week.”

Warner’s Cool Kids, McConnell and Caruso are also among those featured in one venue still promoting local music — GS Steamers in Oswego. Steamers has presented a live broadcast every Thursday with a different performer via their Facebook page.

‘In the short term, for many musicians, this break will be a chance to pioneer new ways of collaborating, performing and promoting their music.’

Like many other eateries, Steamers has adjusted to crafting a take-out menu, and this series provides a platform to local artists — who can post their virtual tip jars — while promoting their dinner offerings.

While some local venues have been able to get creative to keep serving patrons, McConnell is worried about the small businesses as well as his fellow musicians. “I’ve watched nightlife numbers and gig-attendance numbers decline steadily year after year. I’ve watched that trend worsen even more dramatically in the past seven years,” he noted.

“A lot of privately-owned businesses in this region were barely hanging on by a thread in 2020 and now after all this I fear we may see many close their doors for good,” McConnell said. “One aspect of this situation that I have a hard time with is that when I’m playing virtual gigs, I’m not directly helping any of the local businesses that have been hiring me and supporting my music for years.”

So what can musicians and music fans do to weather the storm?

“My advice to fellow musicians and to myself at this time is to keep the faith and to keep learning more about all of the ins and outs of performing online because that’s the future and the future is here,” McConnell said. “Folks can support in many ways online: by sharing musicians’ content and events on social media, by watching and engaging in their events, by leaving a virtual tip if you’re in a position to do so, or by ordering takeout from a local restaurant/bar that hosts live music.”

Forshaw advised her music students to focus on their own mental health first and foremost, as they can often be sensitive to what is happening in the world.

“Keep up your chops, and create an environment at home that’s conducive to your work. Beyond that, be patient and don’t try to do too much. Let ideas emerge. Don’t force them,” Forshaw suggested.

“The kindest thing fans can do right now is make an effort to support musicians,” Forshaw added. “Buy their merch. Like and share their videos. Consider contributing to someone’s Patreon or Kickstarter. Thinking more broadly, live music will only survive if fans support the ecosystem that makes it possible.”

In the post-pandemic world, music fans will have a choice to make, and Forshaw hopes they remember what they’ve been missing.

“So, on some night in the future after restrictions have been lifted, and all those local venues are really hurting from having been closed for months,” she mused, “consider whether it would be better, in the grand scheme of things, to spend the evening on your couch with Netflix or go out and be a part of something that others are building.”