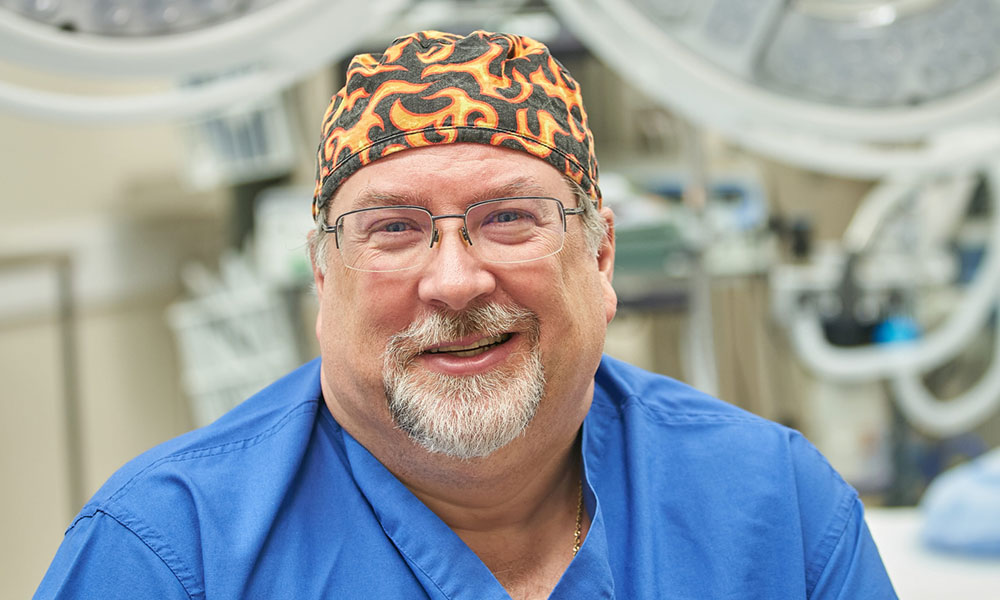 Like his distant relative Jethro Tull, a farmer in England who invented the seed drill in 1701, physician Duane Tull is planting the seeds of change at Oswego Health as the newly designated chief medical officer.

Duane’s family originally came from England to the United States and grew from its roots in Maryland.

Tull grew up on the eastern shore of Maryland and he and his wife Kristy have been in Oswego for about a year and a half. He most recently served as chief of surgery at Geisinger Jersey Shore Hospital, in Jersey Shore, Pennsylvania.

It was Oswego Health’s Kristin Bullard, director of physician recruitment, who successfully reached out to Tull online in efforts to recruit him.

With assistance from Century 21 Galloway Realty, the Tulls found their dream home on the banks of the Oswego River in Granby. They reside there with their dog, Sir Jethro Tull.

It was at Peninsula Regional Medical Center Salisbury, Maryland, where Tull “cut his teeth” en route to a career in medicine.

He started as a junior explorer and worked in the lab and emergency room.

As a junior explorer through the Boy Scouts interested in the field of health care, Tull would go to the hospital every Saturday and check out activity.

“I got immersed in it, except I got very bored because I wasn’t doing anything,” he said.

That’s when he joined the volunteer team.

However, after finding out assisting patients on a volunteer level was not fulfilling enough, he managed to get into the emergency room at the age of 14.

“I was doing exactly the same things as the techs were doing, from doing bed pans to moving patients to handing sutures to doctors,” he said.

He gradually became trained in phlebotomy and drew blood on a regular basis.

He began emergency medical technician coursework at age 15 and finished in three months. “I had to have a waiver from my parents to go to class, and of course they drove me there,” he said.

Tull at one point was the youngest EMT in the state of Maryland.

“I grew up knowing I wanted to help people,” he said.

His mom was a dance instructor and his dad was a labor representative. “Nobody in my family had any medical background whatsoever,” he noted.

Although he is now in an administrative role, “it still is kind of the same thing. In college, I was on the rescue squad and part of the leadership of the rescue squad. I helped design ambulances and ran crews. I’ve always been a leader,” he said. 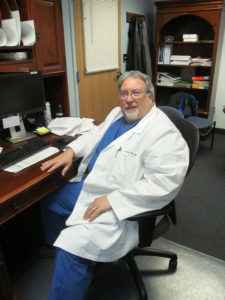 Tull earned his Bachelor of Science degree in chemistry in 1988 at Hampden-Sydney College in central Virginia. He then spent a year teaching high school, and then went to Eastern Virginia Medical School to earn his medical degree in 1994.

He then returned to the Delmarva Peninsula and trained at Christiana Hospital in Delaware.

Tull has been a surgeon or consultant in surgery since 1999. Chief medical officer is his first titled administrative role.

“I’m still doing as much surgery as I was before,” Tull said.

He is maintaining a full practice of surgery through filling his open times with administrative duties and focusing on administration one day a week.

The 54-year-old surgeon has operated his own surgical practice and has worked in partnerships with other practitioners as well. “I’ve gone in all directions,” said Tull, noting that he became adept with aspects such as billing and coding.

His new administrative duties consist of being part of all the credentialing for all physicians, and acting as a liaison between hospital administration and physicians.

“If a medical question arises, it comes to me,” he said.

Tull also interacts with all of Oswego Health’s outside consultants and facilities.

He also recently worked with City of Oswego Mayor William Barlow in preparing local residents against the threat of the coronavirus.

“We’ve got to get the whole community to understand that we are not a Band-Aid station,” he said. “We are more modern in many aspects than Syracuse, and a lot nicer and convenient. If we can get people to understand that, then there is no reason to drive.”

Tull said he leads by example.

“I am the one that always has my records right. I always show up to the operating room on time if not early. I try to do everything to lead by example,” he said.

He said the only way to manage is to be part of the team.

“You have to be actively involved, accepted and work with everybody rather than sitting there and saying, ‘This is how we are doing it.’ It’s got to be a team effort, and that’s how I try to do it,” he said.

“One of our weaknesses when I started here was trying to manage and run the operating room,” he said. “We were running into inefficiencies.”

However, Tull made his presence felt and encouraged workers to focus on being more productive.

“Our actual turnover times now are 5 minutes less than the national average. We are heading in the right direction, but part of it is me being there,” he said.

Tull took on the role of chief medical officer when Renato Mandanas retired from the position at the end of December.

“Basically, since I’ve been here, I’ve been a disrupter,” he said.

“The hospital has been here forever, and people have done things the same way forever. But the reality is, medicine has changed to the point where you can’t do everything the way you used to. Administration understands that, and they needed someone to help them get the medical staff to understand that as well,” he said.

Tull said he was honored by that level of faith is his abilities.

“I think being real is one of the huge things,” Tull said in regards to the keys to doing his job on a high level. “I’ve seen leaders that feel like they are above everyone, and it doesn’t work. You’ve got to be part of the team.

“You have to be that guy who pops in at 4 o’clock in the afternoon on a Saturday and sits down and talks to nurses and asks, ‘OK, what’s going on today?’ You can’t just do the role and leave.”

Tull said his wife is committed to making their transition work.

“We have a running joke going where she will ask me when my last meeting is, and I’ll tell her it is supposed to be done at 4. Then she will say, ‘OK, so you’ll be home at 7.’ That’s kind of the way it is,” he said.

He said the job is anything but just shuffling papers and telling staff what to do.

Tull said the reality of health care today is trying to keep people out of the hospital.

“So the biggest efficiencies that we have to create to be able to keep the place open for those people that do need a hospital involve having alternative sources of income,” he said.

He said for Oswego Health and most facilities, the OR and outpatient surgery are those avenues.

“In this community, we have to get people to understand that we can do the exact same things that they can do in Syracuse, and we can do it as well and usually with a bigger smile than they will ever get in Syracuse. That way, people will want to come here for surgeries,” he added. “We’ve got to get the whole community to understand that we are not a Band-Aid station,” he said. “We are more modern in many aspects than Syracuse, and a lot nicer and convenient. If we can get people to understand that, then there is no reason to drive.”

“You can walk into the OR, the ER or walk onto our nursing floors, and see that we have the same if not better technology,” said Tull, noting that one exception involves robotics.

Oswego Health does feature robotic-assisted technology for its orthopedics department.

Tull said he foresees robotics being used at Oswego Health if it becomes more affordable.

“Right now, it would take 10,000 cases to even break even on the machines,” he said. “However, there is a company now that will actually lease it as you use it. We’re getting closer, but we just are not where it’s a favorable cost-benefit ratio at the moment.”

In terms of other technology, Oswego Health will be featuring submersible UV lighting that has an anti-bacterial component in its new patient rooms.

“We have all kinds of technology that nobody else has, and that’s one advantage we are able to do in a smaller facility,” he added.

Oswego Health has begun significant renovations to its medical-surgical unit at Oswego Hospital.

The $7.6 million investment will completely renovate the third and fourth floors and will modernize inpatient care.

Tull serves as an associate clinical professor for the SUNY system, and is also accessible to SUNY Oswego to field medically related questions and offer expertise.

“We’ve had their medical students come through, but we are not set up for residents. However, we could easily sponsor a resident if they needed a place. But we haven’t set that up yet,” he said.

Tull said in the world of surgery, there is a trend for a transition to practice fellowship.

“We would be more than able to do that with somebody,” said Tull, who has taught physician assistants, medical students and nurses.

“The only thing I don’t like when you are at a really big teaching facility is, it becomes the expectation that they [students] are going to do your case, and I still like to get dirty,” he said.

Tull gets his gratification from being able to do something for someone that he or she can’t do.

“For instance, a guy comes in with a big hernia that is limiting what he is able to do, such as work. We correct it in a minimally invasive manner so he is ready to go back to work in less time than he thought. That is the best thing in the world,” he said.

“Another thing I like is when we go two or three days and nobody fell or complained. Those are the things that I look at,” he said.

Among his challenges from a managerial standpoint is trying to meld individuals into one functioning unit.

“Every single physician has his or her own interest. You have to get past the personal interests to the team collective,” he said. “We are not the Borg, where you can push buttons and program that. The most challenging aspect is getting everybody to think about ‘us’ instead of ‘me’,” he added.

“It takes a lot of talking, listening and a lot of slow discussions,” he said.

Oswego Health’s new Chief Medical Officer Duane Tull shares some advice to those contemplating a career as a surgeon.

“You have to think about the commitment and what it is going to mean for your lifestyle,” he said.

He said people still think that physicians have a 9 to 5 job.

“Normally, we’re in the office a minimum of 9 to 5, but you are usually doing rounds before 9 or maybe after 9. Also, in our group we have three physicians, and we are on call 10 days out of every month, which means 24 hours of being available,” he said.

How does Tull deal with running on fumes due to long hours?

“You learn in residency how to not truly sleep and how to answer the phone and actually be logical,” he said.

“That’s part of why a lot of us are adrenaline junkies. We use that to decompress,” he said.