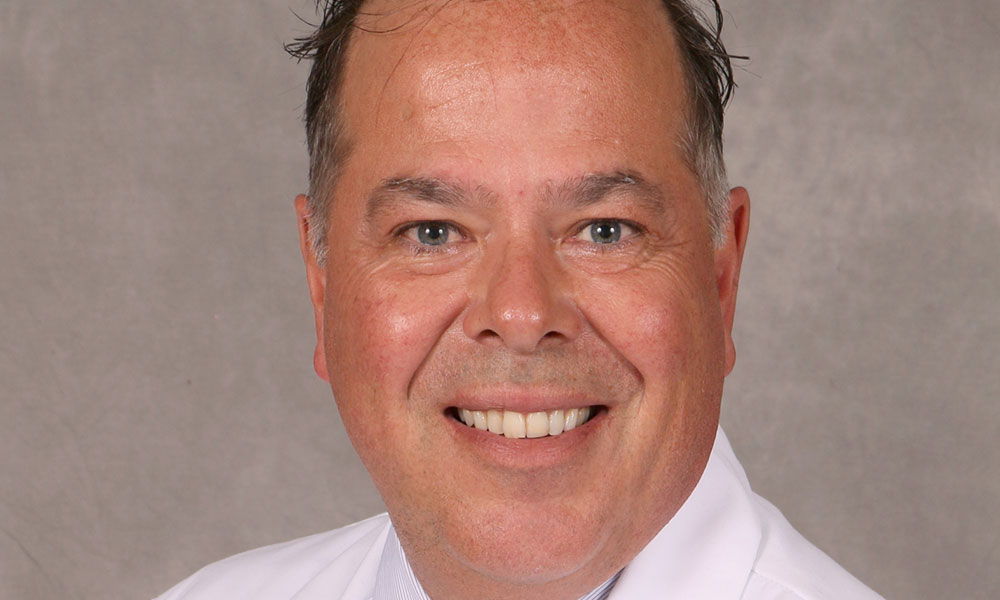 “I expect a lot from my staff, but in turn, once they have gained my respect, they will be part of my family and I will go to bat for them for anything’

It’s one thing for a physician to treat a patient for an illness. It’s entirely another thing to truly be a part of their journey through all stages of life.

Physician Micheal Stephens, recently named the new associate medical director at Oswego Health, has excelled as a front-line family physician throughout his career.

He has worked with many patients in helping them make vital health care decisions.

Stephens, 50, said he is looking forward to being part of the Oswego Hospital team as it strives to provide better quality of care to all reaches of Oswego County and beyond.

Stephens said his past roles in emergency and family medicine, hospice care, and working in senior living facilities helped in terms of preparing for his new position.

The St. Catharines, Ontario, Canada native has experienced health care across the broad spectrum of life, all the way to hospice care and the role of compassion.

“We are certainly in a population with baby boomers, and we are continuing to have an aging population that we are going to be responsible for. We need to treat them with the respect and dignity they deserve,” he said.

Stephens has been a long-time family practitioner at Oswego Family Physicians, which Oswego Health acquired in October of 2018.

Stephens was on the Oswego Health board of directors for six years, and as vice chairman, was positioned to become chairman prior to the acquisition.

“I had to step back from the board, which I loved,” said Stephens, who noted a conflict of interest due to the transaction involving Oswego Family Physicians prompted that decision.

“My role is to continue to provide primary care access throughout the county,” he said.

A focus will be on making primary care offices in Central Square, Fulton and Novelis more accessible and to improve the standard of care.

“We just recently implemented a new electronic medical record system that is different from the hospital. It was a commitment that the hospital made because it recognized that is the most efficient and productive way to care for patients in a primary care setting,” he noted.

Stephens said his past experience in the ER also connected him to first responders and the challenges EMTs face.

“The ER is the gateway to an organization and the front door to Oswego Health,” he said. “We need to continue to build great relationships with first responders and create great first impressions.”

“When you talk about the emergency room, you touch on a lot of moments in a person’s life when there is a lot of stress and duress,” he said.

Stephens’ goals include improving access to care and putting procedures into place for direct admission from patients’ primary care providers.

“That is something most facilities don’t have. We would like to provide a concierge of medical services to those throughout the county,” he said.

Stephens said among the skill sets necessary for a health care provider to work at a high level is the ability to be an effective communicator.

“To be a family physician, you have to play a quarterback role,” he noted.

Also, “you have to be able to identify the specialists that your patient needs,” he added.

One must also learn the “art of medicine,” which includes delivering bad news.

“That is not something that you are taught in med school,” he said.

He said the “science of medicine” involves understanding directives from the U.S. Preventive Services Task Force and Centers for Disease Control and Prevention as well as knowing what screening is appropriate for a given patient.

He emphasizes the importance of creating a trust bond with patients and being able to “deliver a message that suits their personality,” Stephens said.

“As you go through practicing for 25 years, you develop these skill sets that can never be taught in a classroom,” he said.

In terms of his administrative role, Stephens said it is important to understand that “people are depending on me to do the job.”

“There are going to be employees that have different perspectives, and it’s important to be able to walk in their shoes for a day,” he added.

Stephens said across the organization, “everyone is fighting for what they believe is the best thing for the patient. It’s essential to collect and absorb all that information to make the best decision. As long as we understand that the patient is first, we will move forward as an organization.”

North of the border

“New York is very similar to Ontario province, so it was an easy transition. I am definitely attracted to the four seasons and my family enjoys winter,” he said.

Prior to arriving in the Port City, Stephens began his medical career within a rural program in British Columbia in 1997.

He always wanted to practice in a community hospital setting instead of a larger metro area.

When he arrived in Oswego, he had the opportunity to engage in many different aspects of medicine.

“Oswego Health at that time allowed us to work in the intensive care unit, and we did so many different things,” he said.

Stephens also praised physician Robert Morgan, head of Oswego Family Physicians, for giving him the opportunity to work in an efficient office with other highly talented providers such as physicians Mark Humphrey and Douglas Guenter.

“It was a practice that was running well that allowed me to do all the hospital work I wanted,” he said.

As a key member of Oswego Family Physicians, Stephens said Oswego Health is using the successful practice as a model for others today.

Stephens said he leads by example and with passion.

“I expect a lot from my staff, but in turn, once they have gained my respect, they will be part of my family and I will go to bat for them for anything,” he said.

“I will support, assist and encourage them in any area they need, in and out of work,” he said. “I really try to sit back and listen to their side of the story.”

Stephens’ advice to students in medical school is to not be overly concerned about grades.

“I feel medical students are always worried about grades. They have been programmed to do that because it is so competitive to get in,” he said. “Once they get in, they still continue to think about grades all the time.”

“What do you call someone who graduated med school with a 2.2 grade point average? The answer is ‘doctor’,” he said.

Stephens advised med students not to fret about grades.

“Worry about the knowledge you are receiving and enjoy the journey,” he said.

Stephens said medical students he has trained are obsessed with aspects such as testing.

“They are forgetting that you’re just a sponge as a medical student. It’s just wrong when people get bogged down on grades once they have already reached medical school,” he said.

He said the most successful physicians “really absorbed into the patients and just sponged everything up” throughout medical school.

“The people who didn’t obsess over grades in med school have turned out to be some of the best doctors,” he added.

Stephens, 50, takes pride in being part of the Oswego community. His wife Pam has worked and volunteered at the Oswego YMCA for many years.

In 1997, he graduated with his residency in family medicine from the University of British Columbia.

Stephens is the medical director for Morningstar Residential Care Center and The Gardens assisted living community in Oswego.

In addition, Stephens is an owner of the former Michaud Residential Health Services in Fulton and is doing a complete remodel of the facility.

No NY Farm Show This Year