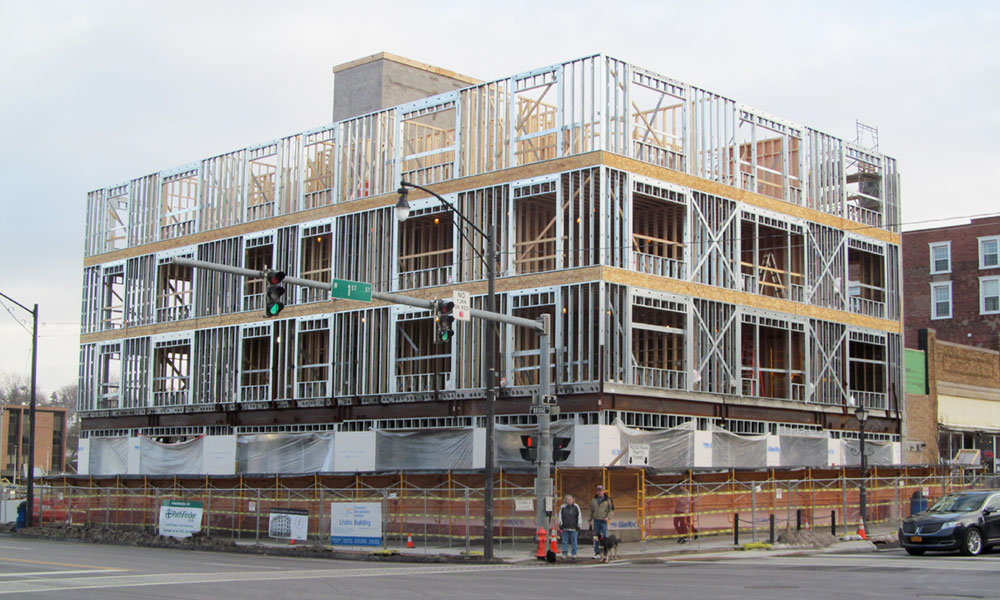 Construction of the LITATRO (acronym for “Luck is the Ability to recognize opportunity”) building, seen as the future cornerstone of downtown Oswego, is well under way and ahead of schedule. It will be a five-story, mixed-use hub for businesses and 21 upscale apartments. Restaurants on the first floor and a rooftop deck are expected, as is underground parking.

The city of Oswego is still riding high on the momentum created by the state $10 million Downtown Revitalization Initiative it was awarded several years ago.

According to city of Oswego Mayor William Barlow, 11 of the 12 projects are completed or under construction.

Construction of the LITATRO (acronym for “Luck is the Ability to recognize opportunity”) building, seen as the future cornerstone of downtown Oswego, is well under way and ahead of schedule.

LITATRO will be a five-story, mixed-use hub for businesses and 21 upscale apartments. Restaurants on the first floor and a rooftop deck are expected, as is underground parking.

Development of a new indoor water park, an extension of the Quality Inn & Suites on East First Street, is also well under way.

“I was able to tour it recently and it is going to be nothing short of amazing,” Barlow said.

The $15 million project will feature a five-story, mixed-use building containing 46 one-bedroom rental units and 10,000 square feet of retail-commercial space on the north end of the site.

Along the south and west sides of the property, there will be 18 three-bedroom townhouses.

Another DRI project is 22 Crossroads, a four-story, 44,000 square-foot building at the corner of West Cayuga and Water streets in Oswego. Featured there will be 32 apartments and about 8,300 square feet of commercial space with underground parking.

The elevator shaft to the building was recently completed.

East Lake Commons, to be located at the former Midtown Plaza, will seek final approval from the city’s planning board in February.

Plans call for a six-story, 88,000 square-foot mixed-use facility at the corner of East First and Cayuga streets.

Barlow said the project is hinging on state funding.

“With any luck, demolition of the existing plaza will happen in early summer,” Barlow said.

The mayor said these projects benefit the city from an economic development standpoint.

“The investment in our downtown, the jobs being created and the residential units that will surely attract more people with good-paying jobs into our downtown will increase business and activity in our core downtown area,” he said.

With unique attractions like the Children’s Museum of Oswego, the indoor water park, the city’s summer concert series, and the farmers’ market, the city is becoming a viable destination for many different people, Barlow noted.

The mayor said the key to sustaining the city’s recent renaissance will be filling the new housing units in the core downtown area with tenants who work for local major employers like Novelis, Exelon and SUNY Oswego.

“The employees are the exact people we want in our downtown with the means to patronize our downtown and local small businesses and further stimulate the economy,” he said.

Barlow has significantly strengthened the city of Oswego’s code enforcement approach as he enters his second term as mayor.

“The most effective economic tool any municipality has is its neighborhoods,” he said. “Code enforcement is a direct investment in neighborhoods.”

“Code enforcement, when implemented properly, is nothing short of an economic development tool to leverage private investment, attract people to our community and raise property values,” he noted.

The mayor said he is seeing tangible results of that while those measures are encouraging further business growth in the city.

“It is more of a reputation correction than anything. Before our permitting overhauls, the city of Oswego was known to be a difficult place to conduct business,” he said. “Whether it was trying to fix property, build a building or pitch an idea, there was an attitude that was known regionally that Oswego was a tough place to do business.”

Barlow said that perception has been reversed.

“Building permit numbers are way up from four years ago and look at the development taking place before our eyes,” he said. “People aren’t afraid to start a project here anymore, large or small, and now know city government is there to help and assist with the process, not throw up roadblocks.”

Meanwhile, the Port City has taken great strides in enhancing its waterfront over the last several years.

“The key these next few years will be taking the tragedy that is the high-water levels and the associated damage and turning it into a positive,” Barlow said.

The city has secured $12.6 million in grant funding from Gov. Andrew Cuomo’s Lake Ontario Resiliency and Economic Development Initiative program. The plan was established in 2019 for municipalities and residents along Lake Ontario to seek funding to repair damage along the shoreline caused by high-water levels and flooding.

The funding is expected to spur economic development projects along the lakeshore.

“If done correctly, these projects will make our waterfront the world-class destination we’ve been trying to make it for the last 40 years,” Barlow said.