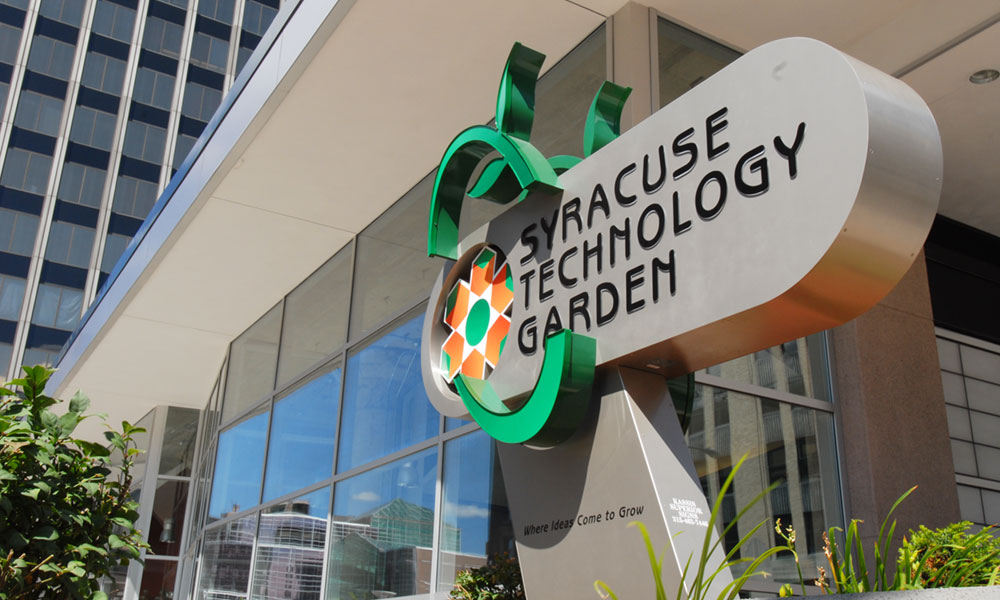 More than 500 startup companies have taken advantage of its services

As the early-morning sunlight broke through the buildings that lined downtown Syracuse on April 18, 1994, people raced to capture the remaining parking spots. It started like any other day in the city. But for those unfortunate enough to find an open spot in the MONY (Mutual Of New York) parking garage at the corner of Warren and Harrison streets, it ended as anything but.

On this now infamous day in Syracuse history, a 115-foot portion of the garage’s upper-level buckled and fell. The steel and concrete building, which opened in 1967, partially collapsed due to structural failure.

No one was injured, but more than a dozen cars were crushed. MONY would later publish a letter to the public saying that the force of the collapse caused other damage to the structure, forcing them to permanently close it.

The garage was soon demolished, with only the ground floor retail space of the building remaining. There it languished for about a decade while lawmakers from the city, county and state worked to find a new and better use for it.

Then in 2004, ground was finally broken. The plan was to build a technology business incubator. The goal was to make a “1990s symbol of failure into a hub of innovation, invention, and entrepreneurship.”

The Syracuse Tech Garden prides itself as a sort of launching pad for nascent technology companies in Central New York. It provides support for startup companies at various stages of development. Through business planning assistance, mentoring, targeted referrals and networking opportunities, staff at the Tech Garden attempt to foster a business’ growth to the point where these startups can graduate from the program and sustain themselves in the market.

Among its most successful alumni are BrandYourself.com, an online reputation management company that was offered a $2 million deal on ABC’s Shark Tank; Ephesus Lighting, which has provided lighting for the Super Bowl; and the Digital Hyve, a digital marketing agency that is considered one of the fastest growing companies in the country.

But perhaps the Tech Garden’s greatest success story is itself. Since opening 15 years ago, more than 500 startup companies have taken advantage of its services. The demand was so overwhelming that the Tech Garden had to expand to a second location in one of the AXA Towers in downtown Syracuse. But even the extra space has not proven to be enough. In addition to its resident companies at the Tech Garden, the organization works with more than 50 virtual members, companies headquartered elsewhere that have access to its services and the building’s coworking space.

Part of this demand is due to what is a very harsh environment for startups. It’s estimated that 90 percent of these companies never get off the ground. But at the Tech Garden, it’s a different story. Jeannine Rogers, program manager at the Tech Garden, attributes that to their Roadmap, a system staff developed to pinpoint the services and support individual companies’ need based on what phase of development they are at.

“It’s being intentional about the stage that they’re in and giving them the right resources at the right moment in that stage to push them along because what happens is if they’re out there on their own and they’re meeting a whole bunch of people, they might get spun in a different direction and try to pivot and then their whole business model changes or they might be thinking they have a great product but they haven’t talked to any customers,” Rogers said. “So, we help them navigate some of those obstacles so they’re not getting turned around.”

The road map has four stops: ideation, acceleration, incubation and expansion; each calculated to help entrepreneurs address the right challenge at the right time.

Kara Jones, content and marketing manager at the Tech Garden, says that’s crucial in the startup world where there are not many second chances.

“If you’re pitching to an investor and you’re in ideation [still refining your business idea] and you’re not ready, those investors are not going to look at you again,” Jones said. “So, we want to make sure that you are ready for investment, you know who your target market is — everything they need to be successful and get that follow-up investment.”

What made the Tech Garden so valuable for Steven VonDeak is the community it offers. VonDeak is co-founder and chief of staff of Density Inc., a data analytics company that helps companies better utilize their real estate space. It’s had an office in the Tech Garden since the beginning, which VonDeak says has been immeasurably valuable.

“When you’re in a space like the Tech Garden where there’s 30-something businesses in there — all in the tech space and all of them are in different phases of their maturity — and there are community supporters that are in and around the building as well, you’re really only one degree away from your next great conversation, your next great connection, or the next thing that you had never previously considered,” VonDeak said.

Many of the companies at the Tech Garden have struggled with the same obstacles and traveled similar pathways. So, just being around other entrepreneurs can bring its own benefit, VonDeak says.

“Oftentimes when you’re an entrepreneur or when you’re an employee at an early stage company, it can be really cold and lonely,” VonDeak said. “Often you’re like so close to something that you’re trying to solve that it’s difficult to take a step back and think about it from a different perspective. Having other people to bounce ideas off of and get varying perspectives and seeing how they went about solving it — there’s a lot of things that can be learned from that.”

2019 is a year of change at the Tech Garden. For the first time since it opened, major construction is underway in the building. Jones says they are tearing down walls and adding glass to offices in the building in an effort to further stimulate collaboration among its members.

Government and economic development officials gathered at the Tech Garden this summer to cut the ribbon on a new hardware center. The 2,200-square foot facility will provide companies a chance to product-assemble in downtown Syracuse. There is only one assemble  line in place right now, but there are plans to bring another online soon. When fully utilized, the assembly lines are projected to support the production of 30,000 units annually.

Density is the first company to make use of the hardware center. The space was in part built for the company after its leadership expressed an interest in wanting to make their units closer to home.

“It all started with a conversation and I think the Tech Garden just looking for ways to be able to support our growth, which I’m not surprised by,” VonDeak said. “They supported us from the beginning.”

Staff at the Tech Garden try to encourage companies like Density to stay in Central New York, or at least elsewhere in the state.

The fruits of that labor are on display along Warren Street, nicknamed Syracuse’s Tech Corridor. Multiple technology companies — including some alumni from the Tech Garden — are located there, such as The Clean Tech Center, TCGPlayer, Ephesus Lighting, and others.

Much of the work the Tech Garden has accomplished, like keeping these companies in the area, has paid dividends for the entire community, Jones says. These new businesses hire locally, use local services, and provide internship opportunities for local students.

“It’s a huge benefit for our community,” Jones said.

And now, the Tech Garden is once again playing a role in moving Syracuse forward.

The organization has helped lay some of the groundwork for and will be key to the execution of the Syracuse Surge.

Mayor Ben Walsh announced the ambitious, $200 million economic development plan earlier this year. The goal is to position the Salt City for the future of the technology industry with major upgrades to infrastructure and the creation of a science, technology, engineering, arts, and math (STEAM) school downtown.

Walsh says they plan to expand the Tech Garden as part of the initiative.