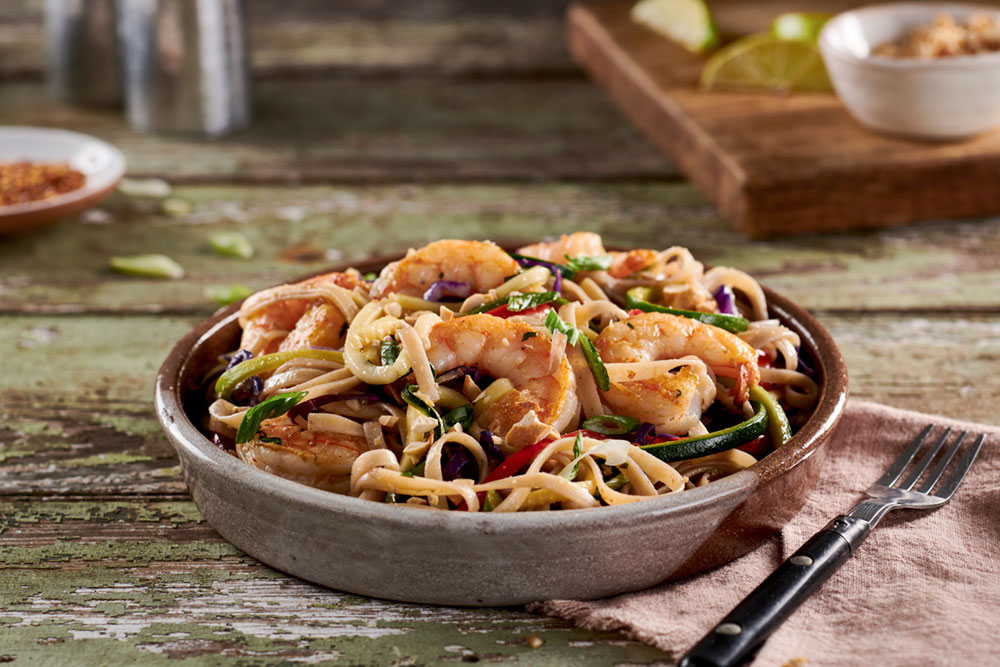 Seared lime shrimp is one of the top sellers at RealEats of America. The company has dozens of options on its website. It ships 25,000 to 30,000 meals per month.

Solving a problem is often the best way to start a new business. Geneva-based RealEats America answers the nagging question of “What’s for dinner?” with a locally-sourced, chef-prepared meal hot in 10 minutes. It’s not a meal kit delivery program, but ready-made meals. Subscribers reheat the meals by submerging pouches of food into boiling water.

RealEats’ concept proved popular enough for the company to win $1 million at the inaugural Grow-NY Global Food and Agriculture Business Competition held in November 2019 in Rochester.

RealEats, founded in 2007 by Dan Wise, has grown to service 22 Northeastern states and is looking to tap the markets in Tennessee and Michigan. RealEats ships 25,000 to 30,000 meals per month via FedEx two-day shipping.

With a cost of $12.50 per meal for the 12-meal-per-week plan, RealEats doesn’t do business based upon price point, especially when compared with home cooking. RealEats’ primary market is comprised of health-conscious people who are too busy or unable to cook. They likely would otherwise eat out most of their meals and these consumers may feel those meals out are not nutritious. Instead, these consumers want a healthful meal with minimal effort and made with farm-fresh sources.

The company also tries to minimize its impact on the environment. Granted, shipping food in plastic bags in boxes packed with icepacks sounds the opposite of eco-friendly. But Ballatori said that the company uses recyclable BPA-free bags and recyclable ice pack and shipping materials, adding that the company’s meals use less plastic than if consumers purchased the goods at a grocery store and prepared the meals themselves.

“Everything is shipped fresh and once customers receive it, they have seven to 10 days to enjoy it,” Ballatori said.

Customers can customize their meals to an extent and a la carte options are available.

“People can say they’d like more chicken or more potatoes as an add-on,” Ballatori said. “It depends upon what your needs as a household are. The menu is entirely gluten-free and we have a lot of dairy-free and plant-based meals. These are in response to consumer trends.”

Many of the meals’ ingredients come from New York farms not far from the RealEats kitchen in Geneva. Ballatori relies upon Headwater Food Hub in Ontario, New York, supplied by 120 area farms. All of those farms are within 200 miles of Geneva — a big difference from buying produce that’s shipped in from California or Mexico.

Ballatori believes that by working with New York farms, he can provide customers with fresher foods than by relying wholly upon distant producers. Ballatori said that fresh salads don’t work with the RealEats model, since lettuce would deteriorate in quality by the time the package would arrive.

“We are continuously adding more greenhouses with a goal of bringing to market an earlier and higher quality variety of products,” Hainer said. “We’re capable of supplying whatever New York organic food they’d like to buy.”

“There really wasn’t much of any local flour available in the state,” Oechsner said. “You could get the local meat and the local fruit and the local vegetables, but the grain was the missing part of the meal. The more local food we eat the better for everyone both on an environmental level and supporting local farmer.”

He feels saddened when he sees once-worked farmlands sitting idle and believes that efforts like those of RealEats helps support New York farmers.

“A company like that that buys from a local flour mill — that’s a value-added enterprise we have,” Oechsner said. “That enables us to raise the price the farmer is paid. The average food dollar, the farmer gets 12%. We pay almost 50% to the farmer as a mill. That makes a huge difference in how much the farm makes. Part of the reason our flour mill is running is to support the local farms by giving them a higher price. When people buy food, they’re voting for a kind of agriculture.”

With the $1 million prize money, Ballatori said that the company plans to expand its cooler space to help in production and hire about 30 to 40 people full time.

“We just want to keep on the path we’re on,” he added. “We want to innovate on how we prepare food and build on the flavors and catalog of dishes we have and grow our space to grow our company. New York state has helped us out a lot and been supportive in everything we’re doing.”