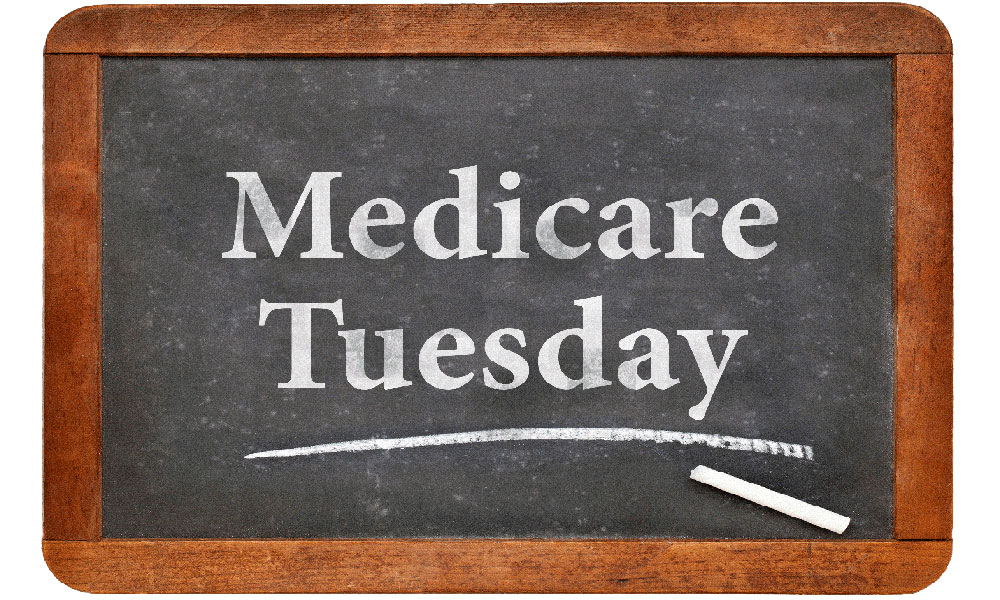 Phil Church, administrator for Oswego County, has taken to Twitter to inform the local community about the soaring cost of Medicaid.

His tweets occur on Tuesdays, which is the day he wires $451,497 weekly to the state to cover Medicaid expenses.

It was Cindy Catanach, acting administrator in Livingston County, who came up with the idea of tweeting out counties’ share of their Medicaid expenses. Church in turn rallied all other counties to do it and called it @medicaidtuesday.

Oswego County budgeted $23.4 million this year for Medicaid, and has seen it go as high as $25.6 million, which was the capped level in 2015.

“It usually ends up on average to be about a half-million every week all year long, every year,” he said. “That is over half of the county’s entire property tax levy for this one program.”

All counties’ payments have been capped at whatever their payment amount was in 2015, which is the cutoff point.

New York Gov. Andrew Cuomo, in an effort to make up a significant Medicaid gap, is proposing sweeping changes to the government insurance program within his current budget that if enacted, will result in substantial property tax rate hikes throughout the state.

Happening simultaneously to the explosion of Medicaid costs was the state expanding eligibility, increasing rate reimbursement and boosting wages for health care workers. It also deferred payments it couldn’t afford to make to the following year, and created its own debt, Church said.

“Those are all policy decisions, and maybe some of them are good or bad. But what they lacked was a financial plan to pay for it. Now it’s come up to the state, and instead of holding itself accountable, it is proposing to just shove the costs down to us,” he said.

While the state budget was expected to be a done deal by April 1, COVID-19 has put pressure on lawmakers voting on the package to make that deadline.

“Medicaid has gotten so expensive and unsustainable even by state standards, that now the governor has a 4 billion budget gap in Medicaid alone. His solution instead of reforming Medicaid and taking a hard look at what you can and can’t afford is just shoving the costs back down to the counties again. That’s what we are fighting against,” Church said.

If the measures pass, Oswego County could see a property tax increase ranging from 1-to-11 percent.

In addition, another proposal calls for the county to pick up the entire tab on administering mental competency exams for people who are arrested.

If that passes as well, the range would be 2-to-12 percent.

“You have so many people on both sides of the aisle that are opposed to this, and then the governor on the other side. What his political strength is will determine whether this gets done,” Church said.

Generally, Medicaid costs Oswego County about $24 million, which is about 12 percent of its budget and about half of the entire property tax levy.

Church said about 83 percent of the entire budget is all mandated expense, leaving legislators with control of the difference.

“If this passes, legislators will be forced to make some choices as to whether to keep taxes from going up by eliminating local services that people want and deserve,” he said.

These services include road paving, law enforcement, the access to resources such as Camp Hollis, and aging veterans’ services.

Other options include raising taxes to cover these needed services or a combination of both.

The governor does not seem to be buckling under any political pressure, as evidenced by no changes in his 30-day amendments to his draft budget.

“We don’t know what’s going to happen. No one has said they are for it, except for the governor and his staff. He also has a history of getting what he wants,” Church noted.

The New York State Association of Counties, meanwhile, has taken a look at what impact it will have on every county in the state, examining data, information and formulas received from the state.

It features an impact calculator on its website — https://www.nysac.org — for users to look up their county and see what the impact range is.

In Oswego County, the range is from a half-million dollars to $5.6 million of additional costs every year depending on how it is implemented in the state.

Using the $5.6 million figure, that would increase property taxes in Oswego County by 11 percent every year, Church said.

Church said all 62 counties in the state oppose the new measures.

The county administrator said equally disturbing is the governor’s and state budget director’s claim that Medicaid costs are increasing because counties are not vigilant in terms of controlling costs.

“That’s just scapegoating because counties don’t determine the cost of Medicaid; the state does,” Church said.

“The claim that Medicaid costs exploded because the state took over administration of Medicaid and counties were writing blank checks is completely false,” he said. “We don’t write those checks and we don’t determine eligibility. The state does that.”

Medicaid was created as a federal program in 1966. The federal act called for the cost to be split 50-50 between the federal government and the states. That is the way it is in nearly all states; however, there was an option for states to have local governments pay part of the state share.

“New York took that option, but it did so to a greater extent than any other state,” Church said. “Most states did not do that because they realized it was regressive bad public policy because what it did was create a financial burden on communities that were least able to afford it.”

Counties are sending the state about $7.6 billion every year to pay for Medicaid. Church noted that is more than the combined total of all 3,000 other counties in the nation.

“That’s how far New York state is out of whack,” Church said. “The issue is not with Medicaid itself. The issue is with the state’s means of funding it, because the state sets rates, eligibility requirements beyond the federal level, makes all the decisions as to what is going to be covered by Medicaid, and how much that is going to cost. But they saddle us with the cost.”

Until 2015 when a cap on Medicaid was imposed, counties were responsible for half the state’s share. The federal government was paying half the bill, while the state and counties were each picking up 25% of the tab.

“When the property tax cap was passed, it was realized that nobody was going to be able to stay within that cap if they continued to have to pay for Medicaid, because the cost was ballooning,” Church said.

Church said the most significant property tax control policy the state has ever passed was to cap Medicaid increases, “even though arguably, the county should not be in the business of funding it anyway.”

The governor is proposing to shift Medicaid costs onto counties with several initiatives.

The first is counties can be protected from any cost increases in Medicaid if they pass a budget that is below the property tax cap and if the growth in Medicaid cost in their county stays beneath what the state sets as a “floating” Medicaid spending target.

“If you stay below that target and below the 2% property tax cap, then no harm,” Church said.

However, he said it is “highly unlikely” any county is going to be able to stay below the floating cap that they set every year because “we don’t control the costs; the state does.”

“If it is simply a case of not staying below the property tax cap, then a county must pay the difference between what the floating cap was and the actual cost to the county, which could be very difficult to budget for,” Church said. “That additional cost will likely put a county over the property tax cap anyways, so it is a Catch-22 situation.”

Church said if a county exceeds the property tax cap, it will have to pay the entire cost of the Medicaid increase in their county for that year. If it breaches the floating growth cap, then it must pay the difference between the floating cap and what the actual costs are.

“The problem with the 2% property tax cap threshold is if a county breaches that property tax cap in one year, but can keep to it the next year, that 2015 Medicaid cap which it had been paying is increased to whatever it was the year the county breached the cap,” he said. “So it causes your Medicaid payment to continually rise indefinitely, and as a result drives property taxes up definitely. That’s not going to work.”

Church said for the first time, there is a united front as both Democrats and Republicans both upstate and downstate realize the gravity of the situation.

The main reason is there is recognition that counties won’t be able to stay within the mandated 2% property tax cap.

When the Affordable Care Act was adopted, the federal government was directed to allocate a certain amount of Medicaid reimbursement monies to counties, funds that would flow through the state down to counties.

Church noted the state is reneging on that and counties will not receive those funds.

Church said legal challenges are being posted to the state for intercepting federal monies that are intended for counties.

The governor is also trying to reestablish the Medicaid Redesign Team, a group charged with reforming the program and looking at ways to bring costs down to the tune of $2.5 billion a year.

Church said counties have submitted ideas to the team in efforts to save both the county and state money.

The county administrator said he would like to see the team come up with cost-saving measures prior to expecting counties to absorb the cost of Medicaid.

Church also noted the team only has one county representative, while other members are state officials or representatives of stakeholders that receive Medicaid payments, such as the health care industry.

Oswego County is not immune to the havoc that Medicaid can play on its coffers. In 2003-2004, Medicaid exploded in cost and drove the county budget into crisis, Church recalls.

The county was forced to lay off about 10 percent of its workforce, and even after doing that, faced several years of double-digit tax increases just to keep its doors open, Church said.

“That’s the damage that Medicaid can do when policy-makers in Albany are expanding the cost of it and expecting local governments to pay for that increase. We don’t want to see that happen again,” Church said.

At that time, the statewide county average increase for property taxes was at 6.7% a year, a number fueled by the high cost of Medicaid.

After the Medicaid cap was implemented, the state average increase dropped to 1.57%.

“That shows you the impact this one mandate has on property taxes,” he said.

Those wishing to advocate for voting against the measures to reform Medicaid that are present in the governor’s budget are urged to contact Assemblyman William A. Barclay (R-Pulaski) at 200 N. Second St., Fulton, N.Y. 13069. They can call 315-598-5185 or email him at BarclaW@nyassembly.gov.

Local Businesses Get Another Shot at COVID-19 Relief