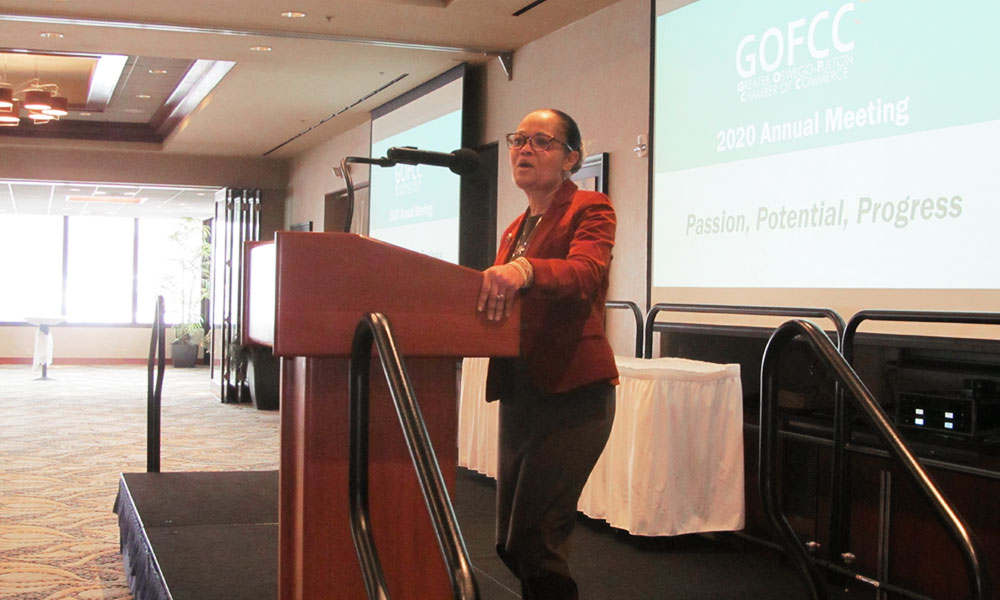 With that mantra in mind, The Greater Oswego-Fulton Chamber of Commerce held its annual meeting earlier today at the Lake Ontario Event and Conference Center, Oswego.

Among the 230 who attended were many community leaders from both the GOFCC but also from its parent organization, CenterState CEO in Syracuse.

Toomey is in her fourth year of leading the organization. Rounding out the GOFCC staff are Sara Broadwell, member engagement coordinator, and Shannon Fults, strategic programs and events coordinator.

Littlejohn presented the “Take it to the House Kid” Super bowl commercial, which features a youngster running and juking his way across the country before finally ending up in Miami at the Super Bowl.

As reflected in the commercial, Littlejohn encouraged chamber members to “take it to the house” as well and realize their dreams.

The President’s Award was presented to Kerrie Ann Webb, who has served as executive director of the Oswego YMCA since 2012. Webb serves as the advisory council chairwoman for the chamber.

Bill Greene Jr., owner of the Oswego Sub Shop, was presented the Community Investor Award. The business celebrated its 50th anniversary in 2019.

A chamber advisory board member, Pierce is a leading force behind Fulton Block Builders, a neighborhood revitalization program that helps homeowners and property owners recover part of the cost of their property improvements.

Bracing for the Worst