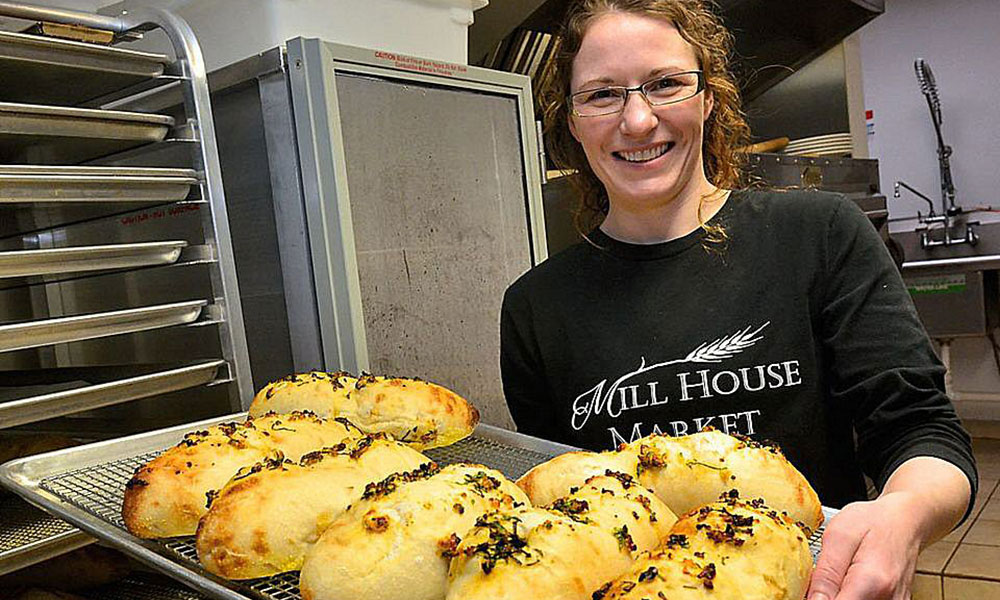 Chef Rebekah Alford holds specialty bread hot from the oven. She is responsible for the kitchens at two Pulaski eateries: Rainbow Shores and Mill House Market.

Responsible for the kitchens at Rainbow Shores and Mill House Market in Pulaski, chef receives the Dee Heckethorn Entrepreneur Award of the year

Little did Rebekah Alford know, while  cooking for friends and family when she was younger, that one day she’d be the chef for a much larger group.

She has helped transform Rainbow Shores, along the cool eastern shore of Lake Ontario, into one of the hottest dining locations in Oswego County.

The restaurant has a deep-rooted history in the Pulaski area. It was once a bootlegging country club in the early 20th century. Nowadays, it offers an extensive featured menu, which is printed nightly. It includes seafood entrée options and additional appetizers and more.

They are open Thursday-Sunday. Reservations are strongly encouraged as they fill most night’s availability.

“I am very blessed to be where I am today,” she said.

Her interest in food began with family gatherings at a young age. That eventually progressed from an interest into a passion — preparing dinner outings with her siblings as a young adult.

“I realized that preparing food is an art and dining is an exciting form of entertainment when paired with fantastic wine and excellent company; it should not be rushed,” she said.

Many courses of beautiful, delicious plated-up “art” would arrive at the table. First, it would undergo a photoshoot, an enthusiastic critique and then be passed around the table for everyone to taste. They would then share their thoughts about the appearance and the flavors of the dish.

“I began to collect cookbooks and put in a lot of hours of baking and cooking for my family and coworkers,” she said. “Eventually, I was accepted into Paul Smiths College in Saranac Lake and enrolled in the culinary program, where my formal culinary education kicked off.” 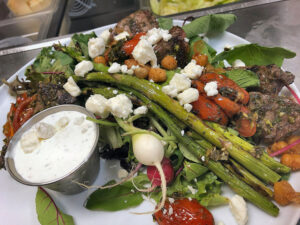 She was a single mother and older than most of her peers.

Through school, she was introduced to several chefs and instructors who were monumental in keeping her focused, instilling her with a tremendous amount of information.

“I continued to learn through some of the great chefs in the Lake Placid area with work at Lake Placid Lodge, Mirror Lake Inn and Lumiere’s,” she said.

Alford was eventually hired as the chef at Simply Gourmet in Lake Placid.

“I was responsible for preparing all the items that needed to be cooked and grilled for the deli and catered events. I was delegated to do most of the baked goods, including specialty cakes for weddings and celebrations,” she said. “I also created gingerbread houses during the holidays.” 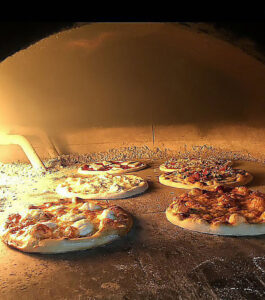 Through Simply Gourmet, she was also hired by Lake Placid area residents as a private chef for at-home dinner parties.

These experiences are what prepared her for the challenges of running her own kitchen, she said.

“When Rainbow Shores came up for sale, my parents introduced the idea of me coming back home to the Pulaski area and being the chef of my own restaurant,” she said. “We are now in our 12th season.”

Alford says the setting at Rainbow Shores is unbeatable.

“I continue to be excited to prepare food for our customers. Over the last several seasons many guests have made memories, watched sunsets, become engaged, said their vows, enjoyed birthday parties, anniversaries, baby showers, reunions and planned many other celebrations here,” she said.

She is always seeking inspiration for new dishes and to provide a new feature menu daily with exciting cocktails and entrees. 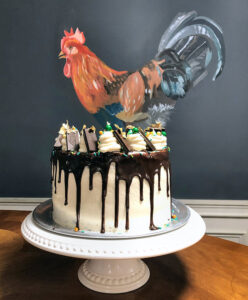 They established the Mill House Market in the village of Pulaski in 2017. The Mill House provides a casual setting with a deli and bakery serving dinner with a full bar and a gift boutique.

“The menu I created in the deli is suitable for catering breakfast and lunch meetings or gatherings. Bread and pastries are made on site daily; a wood-fired oven is used to prepare specialty pizzas. Online ordering is an option,” she said, adding, “The gift boutique is stocked with some locally made artisan pieces such as wall art, jewelry, locally trapped animal pelts, lotions, soaps and other home goods.”

Cited for her work

In July, she received Operation Oswego County’s 2021 Dee Heckethorn Entrepreneur Award in recognition and appreciation of exceptional entrepreneurial spirit, creativity and dedication to improving the quality of life in the Pulaski area.

She was cited for the acquisition and expansion of the Rainbow Shores restaurant on Lake Ontario in 2010; for the development of the Mill House Market Deli and Bakery in Pulaski in 2017; for more than 10 years working to the improve the growing tourism industry in the Lake Ontario and Salmon River regions of Oswego County. 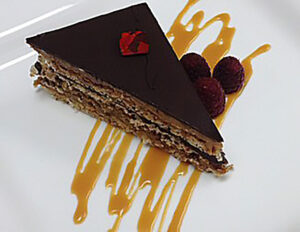 “I am extremely thankful that the community has supported my passion,” she said. “Food and people are truly a passion of mine and I am excited to do what I do every day.”