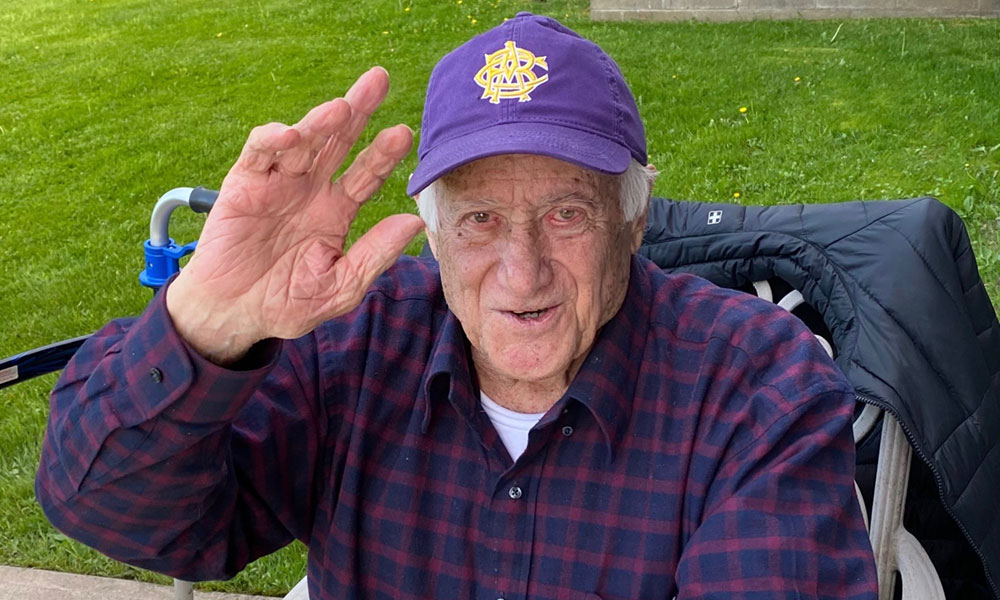 If you live in Oswego, it is likely your life has benefited from that of Joe “JD” Castaldo, whether directly like the many family, friends and business associates he left behind Sept. 12, or indirectly through the numerous ways in which the contractor helped build the structures and sense of community that comprise the city of Oswego, his lifelong home.

He was 92 years old and the last surviving member of a nine-sibling, first-generation Italian American family.

Like many in his generation, living through the Great Depression shaped his work ethic. He excelled as a mason while working for his father and eventually established Joseph D. Castaldo Construction Company Inc. in 1952. He served as president for more than 30 years.

His business and civic involvement included serving in the Carpenters Union, and supporting service organizations such as the Salvation Army, Elks Lodge, Knights of Columbus, and St. Jude’s Children’s Hospital, plus sponsoring local sports teams. Castaldo served as a National Guardsman for more than 10 years.

Oswego Mayor William “Billy” Barlow, Jr. dedicated the 120 E. First Street building as “The JD & Alma Castaldo Building” for Castaldo and his wife in honor of their community contributions.

Toomey related that balancing work life with family life was important to Castaldo. His legacy includes the three daughters he and his wife Alma reared, Cindy Murabito, Sandra Bilson and Patricia Reynolds, and the influence they had on their six grandchildren and seven great-grandchildren. His bride of 63 years died in 2016.

His community influence encouraged his family to become civic minded such as Toomey, who serves as the executive director of the Greater Oswego Fulton Chamber of Commerce, and her cousin, Joe Murabito, who operates several long-term care facilities in the area.

“He always encouraged us as women to seek out an education and strive to be whatever we wanted to be,” Toomey said. “We were never told we couldn’t be something because we were women. He was present for everything: sporting events, concerts, milestones, high school graduation, college graduation.”

Between the big milestones were ordinary days in which he still found time to spend with his children and grandchildren, including Sunday church services at St. Joseph’s Church in Oswego, backyard barbecues, fishing, bowling, playing softball, gardening and taking care of his hobby farm.

Toomey’s cousin, Joe Murabito of Baldwinsville, recalled his grandfather’s generosity to the community. In the late 1960s and early ‘70s, Castaldo was a general contractor on a nursing home project.

“What happened was the developers ended up walking for some reason,” Murabito said. “He had all his local workers partway into a job. He decided to finance it himself and finish it.” He named the facility Sunrise Residential Healthcare and Rehab Center.

He served as the landlord from 1971 through 2014 when Murabito bought the building from him. From 1995 through 2012, he operated what is now known as Morningstar Care Center until Murabito began administrating it.

“None of those things he was looking for, but I think he was a very committed, stick-to-it person,” Murabito said. “When he started something, he finished it. Not many people recognize that. He wasn’t a healthcare guy but a general contractor. He kept it going a long time and caught a lot of flak for it.”

Murabito said that his grandfather was “a fixture of Oswego. He was very involved, a family-oriented guy. That was always first.”

Oswego’s Mayor Barlow remembers not only Castaldo’s contribution as a contractor but also through family members like Toomey and Murabito who still benefit Central New York.

“He was an extremely hard worker and built a great company and more than that, he was a family man,” Barlow said. “That’s what I first noticed about him.”

The mayor first became acquainted with Castaldo in 2014 when he was a city councilman and the two met frequently after Barlow was elected mayor.

“During my first term, we talked about buildings he owned and about history and politics,” Barlow said. “It was great to hear his input. He contributed a great amount over the years. He was a great contributor to the Oswego community but his legacy will live on through his work as a contractor and through his family.”

“My father did many real estate transactions with Joe and I was able to meet him and work with Joe on many of his projects over the years,” Galloway said. “I had the honor of meeting Joe in my new office which Joe developed years ago and loved hearing the stories of the history of this project as well as many more. Joe will be greatly missed by the Oswego real estate community.”