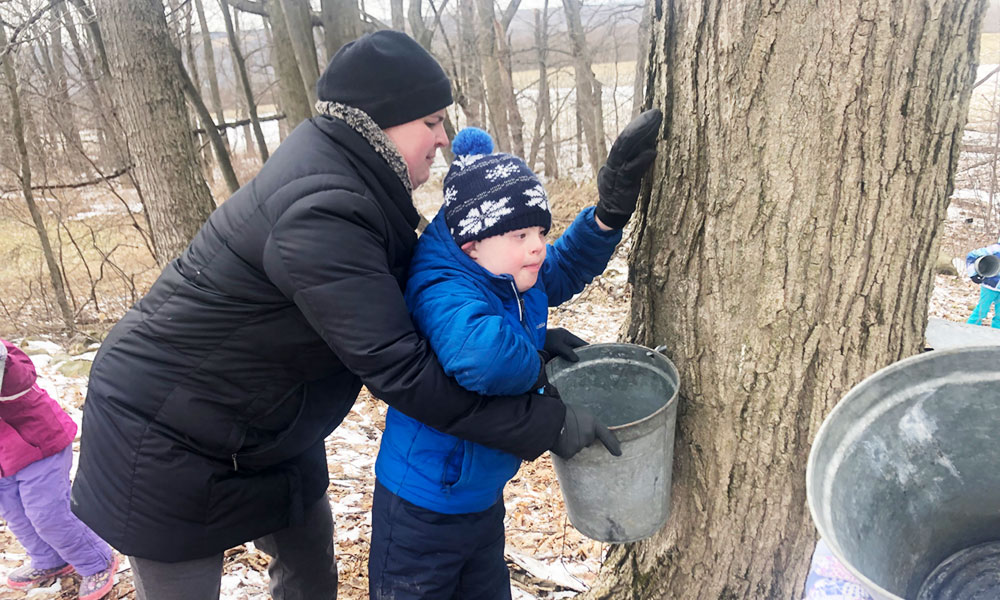 Jennifer Powers helps her son, David, work sap off a maple tree in their property.

Happy Jack’s Maple sells at area farmers markets, pop-up shops in other stores, online and at a few grocery stores

Most people become farmers because they are carrying on a family tradition or they chose this as a profession and attended a school such as Cornell or SUNY Morrisville.

For Jack Powers of Locke, Cayuga County, it was for his son, David, who was born with Down syndrome in 2010.

According to Employment in Adults with Down Syndrome in the United States, a study released in 2015, only 56.6% of adult respondents (17 and older) work paid positions and only 3% work fulltime. The median wage for people with Down syndrome was $8 per hour.

While brainstorming for ideas on what he could do to provide for David’s future, he heard that a neighbor wanted to retire from the maple syrup business and sell his operation.

Powers had been working as a police officer in Ithaca, his dream job. Despite possessing no knowledge of maple sugaring, he decided to invest in the business and stay home with David. His wife, Jennifer, works at Cornell as manager of the virology lab. For a couple of years, he boiled sap at a neighbor’s farm until the maple business became profitable enough for him to make it a full-time operation.

A Farm Credit loan helped Powers bring the operation up to modern standards. Improvements included a vacuum system, which helps draw more sap from the trees and new reverse osmosis equipment, which hastens the boiling process.

Maple farmers boil the water from about 40 gallons of sap to make one gallon of syrup. Powers also replaced his initial wood-fired evaporator with one fueled with oil because the cost of wood became too expensive. Powers built a sugar house to provide a home for the operation.

Other farmers and friends helped Powers learn the process and for his first season in 2012, he tapped 3,000 trees, the same year his daughter Brooke was born. For the current season, he has about 15,000 taps out, which is a high number for many New York farms.

Happy Jack’s Maple — the brand name of Powers’ syrup — sells at area farmers markets, pop-up shops in other stores, online and at a few grocery stores. Powers also sells to wholesale clients, a revenue stream he hopes to increase in 2021.

In addition to regular syrup, he also makes bourbon barrel aged syrup. He uses newly emptied bourbon barrels to store and age syrup for up to a year. His other products include maple cream, maple sugar and maple candy. Powers also makes maple cotton candy and maple popcorn when he is able to sell at summertime events.

“With COVID, it put a stall in everything we were doing,” he said. “Sales dropped way off this year as would be expected. Hopefully, next year we’ll invest in more marketing.”

Early in his business, he realized the power of marketing.

“Everyone told me I was crazy to pay a fairly large amount of money for someone to design the label, but it has drummed up a lot of business for us,” Powers said. “A bunch of accounts were from people who said they saw the label and it caught their eye.”

Other than David, now 11, and his sisters Brooke, 8, and Julia, 6, Powers has only occasional help from his father, Dwight Powers, and other family members.

“David is definitely getting more involved,” Powers said. “He likes the bottling aspect. He likes to hit the button to get the syrup flowing. He does what he can. I try not to force the issue. I started it for him and it is a family operation. If the kids aren’t interested in it when it’s time for me to retire, that’s that.”

For now, he welcomes the children’s help, especially in a line of work where challenges include squirrel and wind damage to the lines and uncooperative weather. The temperature regulates when maple trees release sap. Maple farmers need freezing cold nights and warmer days for the sap to flow. If it is too cold or too warm, the sap is limited.

Sugaring season can begin as early as January and end as late as the end of March, depending upon the weather. Once the sap begins flowing, the season lasts six to eight weeks.