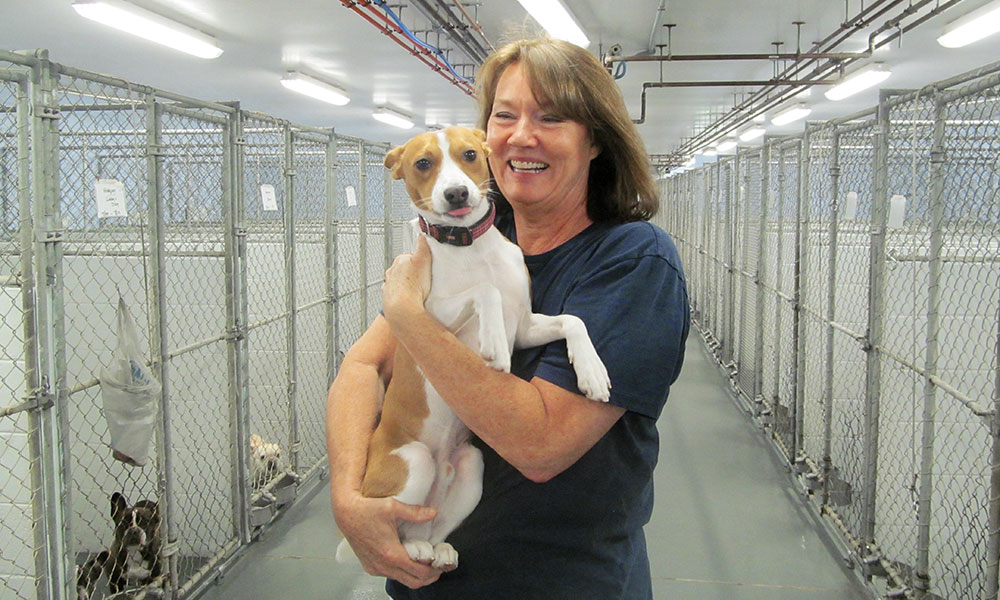 Marie Schadt holding a dog at her K-9 Grooming and Pet Motel in the town of Oswego.

As if that is not enough responsibility, she is also the county legislator for the 19th District in Oswego County.

Humbly starting from the laundry room in her basement in 1977, Schadt has grown the business to where it is a premiere destination for pet owners wanting top-level service throughout the region.

Schadt said the keys to the business’ longevity — the business is over 40 years old —have been earning the respect and trust of customers, being consistent and following through, and using the finest products possible.

“You also have to keep the facility immaculately clean, which is a huge process,” Schadt said.

“You can’t really even go to the grocery store during holidays. You have to stay on the property,” said Schadt, noting she has cameras that provide images right to her phone.

“I live right on the premises, so can hear anything that goes on,” she said.

“It’s your life. Your clients are alive, and it’s like having a dairy farm on steroids,” she said. “Everything is owned by someone else, but they are family members.”
Schadt has overseen some dramatic transformations regarding dogs.

“We took a dog in from a vet clinic and were told she was super aggressive. We boarded that dog for more than a year because its owner was experiencing a health situation,” she said. “The owner was very committed to the dog, and we really admired her commitment.”

“We worked with her, desensitized her, and got her to walk among and play with other dogs,” she said. “Now you can stand her on the table for the vet and she doesn’t have to use a muzzle or any of that crazy stuff.”

“It was very rewarding and we gained the admiration of the vets’ group and owner,” she said. “Everybody here came to love this dog.”

Schadt also gets gratification from alerting pet owners as to health threats and directing them to veterinarians.

“Unless you are drying them inch by inch, you are not going to find melanoma or a small tumor,” she said.

Schadt’s team has found fishing lures buried in the coat of heavily matted dogs and even a rubber band wound around a dog’s ear, probably caused by a child.

One dog once consumed many Boy Scout pins and somehow survived.

Contributing to her success is a very low turnover rates in terms of employees.

The business has 10 employees, including Susan Muldoon, who has been there for 40 years.

Darlene Dorn and Allison Longley, meanwhile, have been employees for more than 20 years.

“It’s a group effort. My employees have skin in the game, and without them, I would not have made it,” Schadt said.

Although she attended college, Schadt’s real passion in her early years was in riding and showing horses.

She worked for John Shaffner, a noted Grand Prix rider and trainer, to ride green — or minimally trained — horses. Shaffner trained Abdullah, a stallion who won many international titles in the sport of show jumping.

The business today also features a horse riding facility that was built about 20 years ago.

It was her mother, Alma Joyce, who provided Schadt with the spark that led to the launch of her business.

Schadt’s grandmother had her miniature schnauzer groomed locally but was extremely displeased at the results.

She said, “Oh my God, Marie, this is horrible,” and prompted her daughter to pursue grooming due to her experience preparing horses for show.

“At that time, there was nothing of substance in the area,” Schadt said.

That’s when Schadt became acquainted with a dog show judge in Syracuse, Nina Reynolds, who had been a judge in the United States as well as Paris, London, Canada and Bermuda.

Reynolds was heavily involved in the Dachshund Club of America, and worked with imported dogs from Germany and various places throughout Europe. She would take on breeds such as standard poodles and Kerry blue terriers as a handler.

Joe Holland, Schadt’s father, paid for his daughter to become a full apprentice with Reynolds for more than a year.

“We started to go to shows after that and prepping dogs’ coats. When showing, you are really competing at a high level and have to learn your breed groups,” she said.

Schadt was then compelled to study the history of each dog breed.

“No one seems to do that now. I just see people get into the field but don’t really immerse themselves in it,” she said.

Schadt would then begin scissoring poodles and loved it.

“It’s a lot of work to do it right. It’s time-consuming, and you have to learn some anatomy,” she said.

Schadt pointed to the recently concluded National Dog Show as a true example of extraordinary grooming.

“These dogs are not eating dog food,” she said. “They are on raw, natural diets that are targeted at their muscle mass and body type. It’s a real different world,” she said.

Schadt said the dog grooming business didn’t “have the buzz that it has now.”

People are now well aware of various options for taking care of their dog.

Schadt makes her own dog food that does not contain grain, which is used as filler in many dog food brands.

She is critical of food dog manufacturers defending the use of grain, and says their claims that grain-free brands are linked to heart disease in dogs are erroneous and profit based.

Schadt has helped prep some of the top dogs in the nation, including Woodley, a collie owned by Jean Welsh who was No. 1 in the country.

“I don’t know how people equate it with a hair dresser. A hairdresser would charge $300 for what we do. People don’t realize what goes into it,” she said.

“One day, I was scissoring on a standard poodle, and Nina said, ‘Whoa, you don’t need me anymore.’”

When Schadt decided to start her business, “everybody thought it was a joke,” she said.

After placing a small ad in a local newspaper, she began fielding her first calls. She groomed her first dog in the basement of her home in the fall of 1977.

“I started in my laundry room. It could not have been more humble,” she said.

Her father helped hang lights while her husband Ron brought a little cage unit in.

“He thought I was nuts,” she said.

“Then I started doing a few jobs, and people said, ‘This looks great!’ So I had to move into the front portion of the garage and then took it over quickly,” she said.

Her husband is quite adept at industrial piping and heating systems being a career steamfitter, while her father was head of the local building and trades and her brother Sean Holland is a mason. Using their talents made costs considerably less onerous, she noted.

However, Schadt had difficulty financing the launch.

“I went to a couple of banks, and my grandmother did help me and I paid her back. But then I needed serious money,” she said.

It was then that Jerry Crego of Oswego County Savings Bank, whose wife was a customer of Schadt’s, that wrote her first note.

“I was a nervous wreck wondering if I could do it,” she said.

Everybody then pitched in. “We basically worked morning and night for probably 15 years,” she said. “You work all day and you build all night.”

“It takes around four years to build a good client base,” she said.

Schadt said she has “truly been through the school of hard knocks” when talking about her ascent in the industry.

“When you stumble over yourself, you have to stop and say, ‘OK, let’s do this better’,” she said.

Schadt goes to trade shows, talks to experts and is willing to try new products.

She creates her high-quality shampoo at body temperature complete with a neutral pH that does not interrupt a pet’s acid mantle and is compatible with flea and tick products.

Schadt takes great pride in the infrastructure her business features, such as a heavy-duty heating and hot water system.

She also has the ability to move all air out of the building in a matter of seconds, and changing the air is done twice a day.

However, Schadt characterizes cats as one of the more difficult aspects of the business to deal with.

“They are a lot of work and up workers’ compensation numbers,” she said.

One of her customers travels from Buffalo several times a year to have her cat and dogs groomed.

Schadts draws from a wide area, as attested to by customers in Fulton, Fair Haven, Baldwinsville, Syracuse, Skaneateles and Hamilton.

Having a business two miles from SUNY Oswego also has led to clients in New York City and New Jersey, who see her as offering “big city grooming” in Oswego.

She also had a brush with fame when famed singer and entertainer Frances Langford Evinrude cruised into the area aboard her 108-foot yacht, Chanticleer.

Her personal assistant would call Schadt at Lock 8 on the Oswego River to instruct her to meet them at the dock to pick up and groom their dogs.