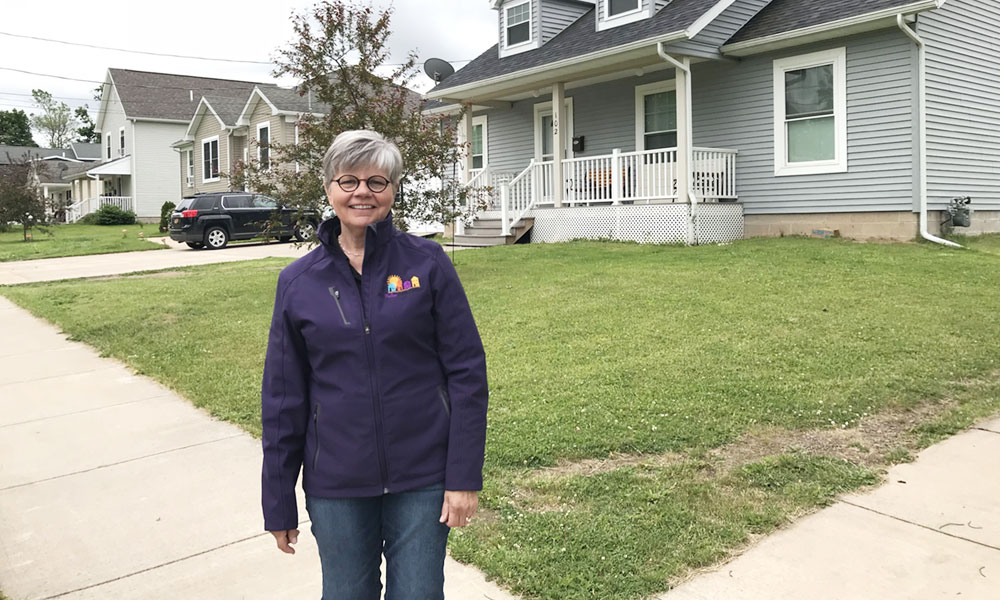 Founder of Fulton Block Builders making progress, one neighborhood at a time

One block at a time.

That is the approach the Fulton community is taking while seeking to upgrade and revitalize its challenged neighborhoods.

At the forefront of this effort is Linda Eagan, founder and administrative director of Fulton Block Builders (FBB).

Eagan, 65, spent her entire career working in the field of human services.

She worked for the Oswego County Board of Cooperative Educational Services, which is now the Center for Instruction, Technology and Innovation.

In 2016, she was inspired to start FBB, a grassroots, volunteer-driven community revitalization program.

Several years ago, she read an article about the city of Fulton titled “Fulton, New York: America’s Sad Story,” which appeared in now-defunct Syracuse New Times.

The piece noted how the city was dying in the wake of closures that included Miller Brewery, Nestle and Birds Eye, and how the city’s population had nosedived by 16% over the last 25 years.

“They say you can never go home again. In the case of Fulton, New York, you really can’t,” the article claimed.

That is what sparked Eagan’s passion.

“When I read the story, it felt like there was no hope and that everything was behind us,” she said. “I was so saddened that people couldn’t see a future for the community.

“With that, I said, ‘I can’t sit back any longer. Something’s got to change,’” the Rochester native quipped.

Eagan said it started with sitting on people’s front porches and talking about what could be done.

“Those conversations began to bring together a strong group of people, including some business leaders, who wanted to spark change,” said Eagan, noting the organization was launched in 2017.”

“Over time, I learned of an innovative approach that builds on the strengths of a community,” she said. “This resonated with me immediately because whether I was raising our family, working in juvenile detention facilities, engaging in prevention education, teen pregnancy or public health, I looked for the strengths in each person or group.”

“I believe strongly that all people have many assets, even though sometimes they are hard to identify when hope is lost,” she said. “Fulton had lost hope, just like so many clients I had worked with over the years. It seemed like a very reasonable idea to transfer my skills to community revitalization.”

That first year was all about building relationships.

“Those relationships highlighted the love and pride that still exist in our community, inspiring me to keep moving forward,” she said.

Soon, there were many people ready to volunteer to make this change happen in the city.

“I needed to have confidence and empower the volunteers and residents, just as I had done in my human service work,” she said.

Eagan learned some valuable tenets during her career in human services.

“At one point, I worked with a teen mom who was struggling to make a life for her child. When she was growing up, things weren’t so great,” Eagan said. “She desperately wanted a better life for her son, but so many things seemed to be working against her.”

Finally, the single mother got a job and things slowly started to turn around.

“Then one day when I met with her, I found that she had given almost all of her wages to a friend in need, consequently hurting herself and the baby in the process,” she said. “It didn’t make sense. I wanted to be mad and walk away.”

However, Eagan looked at the situation more closely.

“That young lady had identified a strong circle of support that she can always count on when the need arises,” she said. “And when you are living in poverty or disenfranchised in some way, that need can always be on the next horizon. That friend was her safety net and she desperately needed to keep a safety net.

“We are not helpful when we judge and walk away.”

Instead, one is helpful when he or she listens carefully to find strengths, identify supports and give hope, she noted.

“It was a slow process but in time, this young mom learned to give her friend some money to help her through her crisis, but not so much money as to hurt the young mom’s own independence or her child,” she added.

It’s that kind of thinking that resonated so quickly with Eagan when she heard about the Healthy Neighborhood initiative that FBB was created from.

The Healthy Neighborhood approach is a concept promoted by national neighborhood strategist David Boehlke, and it asks people who want to reinvigorate their neighborhoods to invest three things: money, time and energy.

“In many ways, Fulton had become disenfranchised. It had lost hope and didn’t see a way out,” she said.

Eagan said FBB is all about identifying what’s going well in the city and strengthening that.

“It is not just about planting flowers, hanging a new storm door, or trimming the hedges. It is about strategy — getting residents to understand the importance of these little things,” she said. “It is about residents reacting to those little things and feeling better and more confident about their properties, blocks and neighborhoods.”

Eagan said it is about building neighborly relationships that foster community, and how this confidence translates into investment, both financial and social,” she added.

“Fulton had lost hope, just like so many clients I had worked with over the years. It seemed like a very reasonable idea to transfer my skills to community revitalization.”

Eagan said watching neighbors introduce themselves and seeing new connections made are some of the more “feel good” aspects of being director of FBB.

She gets great enjoyment from watching neighbors develop a plan for their block that demonstrates the pride they have for the entire Fulton community.

Eagan said another source of gratification is “blowing away” all expectations FBB had set in terms of fundraising, the number of participants and volunteers involved, business participation and community recognition.

Eagan has personal strengths that make her a perfect fit for the administrative director’s position with FBB.

She studied social work and criminal justices at Anderson University in Anderson, Indiana.

Eagan also studied school counseling at SUNY Oswego. She is a graduate of Churchville-Chili High School in Churchville, near Rochester.

“I’m suited for this work because I have tenacity, am optimistic and organized,” she said.

FBB was recently fueled by a $140,000 grant from the Richard S. Shineman Foundation to support the growth and vitality of the organization.

According to Eagan, FBB would not exist were it not for the foundation’s support.

She said the foundation’s motto of “Catalyst for Change” is quite accurate.

“The work they have been supporting throughout the county has been truly transformative,” she said. “I believe the key to winning the first award was my deep understanding of the ‘Healthy Neighborhood’ revitalization program approach. I was asked to meet with board members to explain my plan, and they believed in what I shared because it was based on the successes the Oswego Renaissance Association (ORA) had already experienced.”

The ORA promotes and facilitates neighborhood revitalization through a variety of programs in the city of Oswego.

Eagan said since that first award from the foundation, the road to success became instantly paved.

Kathy Fenlon, foundation chairwoman and former executive director of the Oswego City-County Youth Bureau, explained the “transformative” nature of the FBB program at the organization’s kickoff event in 2018. In attendance were more than 250 awardees, volunteers and funders.

Fenlon noted the FBB program not only had a huge impact in the community, but was also leveraging additional funds from other sources.

The foundation chairwoman also noted FBB was also growing in capacity and finding ways to generate funding to sustain projects and services.

FBB continues to grow in sponsors in 2019, allowing the group to broaden its programming efforts.

Eagan said that “ratios, ratios and ratios” have been the keys to sustaining this high level of momentum.

“We are able to demonstrate to our supporters how each dollar they donate to the program is doubled with the matching 2-to-1 Shineman Foundation grant,” she said. “Furthermore, for every $1 FBB pays out to resident awardees, those home owners are spending three to four times as much, even though only a 1-to-1 match is required.”

“Participating homeowners collectively have invested three and a half times the amount that was granted,” she noted.

FBB Block Challenge awardees have received matching grants from $63.50 to $2,000.

“A few even outlined the work that they would complete, yet asked for no money from FBB. They said they wanted to support their neighbors,” Eagan said.

However, in other “Healthy Neighborhood” initiatives, the need for challenges does not go on endlessly.

“It is predicted that in approximately 10 years the scales will have tipped in the favor of ‘Healthy Neighborhoods’ and Fulton city pride,” she said.

The new norm will be continuous investment in properties because residents will have the confidence that their investment will pay off, she added.

“FBB will continue to monitor and advocate for this change as we move forward,” she added.

Eagan described this bond as a “fantastic relationship.”

“They have been easy to work with and extremely supportive of the FBB program,” she said.

Eagan said enhanced recognition and the opportunities to form connections are the benefits of the CenterState CEO alliance.

“There seems to be a stronger recognition among businesses, with more connections being made,” she said.

FBB has brought on 13 new business sponsors to date this year. “Fundraising continues to be very time consuming, yet rewarding,” she said.

Eagan said the committee uses a weighted matrix, allowing members to give each application a score. An average of individual scores is used to determine the block score.

The group then meets to discuss the strengths and weaknesses of the applications and determine awards. This year, the anonymous scoring committee spent two weeks carefully reading the applications and ultimately awarded 21 blocks $174,685,25 in grants to 214 participants.

Eagan addressed what the future holds in terms of the organization and the homeowners in Fulton that it serves.

“The ‘Healthy Neighborhood’ approach takes into consideration that positive changes are not sustainable without broad resident commitment to involvement and to neighborliness,” she said.

Eagan provided an update on the status of establishing “pride grants” like those that are featured through the ORA.

Pride grants were recently introduced in the FBB program this year.

“We have two blocks participating. One has come together as a group to install exterior lampposts to make their neighborhood more welcoming,” she said. “The second is helping an area church with exterior improvements to its property.

“We hope to grow the Pride Grant program and continue to promote it.”

Hobbies: Gardening, family cooking, hiking, and spending time at my cottage and with friends