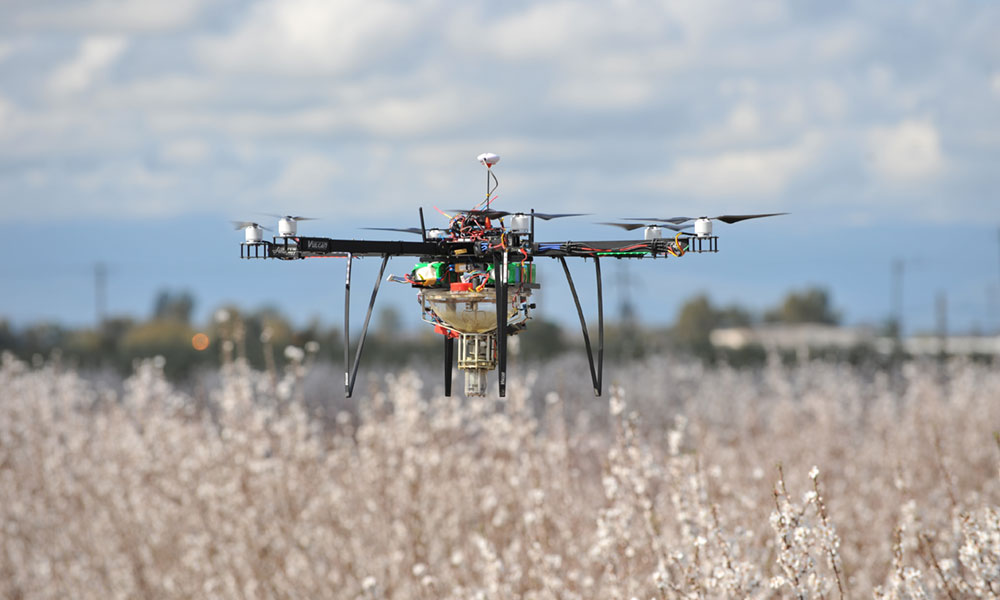 While farmers have been using unmanned aerial vehicles (UAVs) to efficiently scout fields for crop issues and to take aerial photos, Syracuse-based Dropcopter flew the idea in a new direction: pollinating fruit and nut trees.

While Fine had been struggling to develop drones to deliver food and beverages to golfers on the course (come to find out, they hated the noisy fly-over), Kobal had a different idea: let drones help pollinate trees to augment honeybees’ work.

The duo’s work in pollinating with drones impressed the judges at the Grow-NY competition in November in Rochester, where Dropcopter was named one of just seven winners out of 200 entries. The $500,000 prize will certainly help out as the company continues to bloom as the flowers it pollinates.

Initially founded in San Francisco in 2014, the company began working with almond growers who spend $400,000 to pollinate 1,000 acres of almonds. It’s an industry practice to ship in honeybees from across the U.S. to ensure they have enough available to pollinate trees in California. The industry uses 1.8 million colonies to provide pollination to almost a million acres of almonds statewide.

According to a November 2015 study by the University of Illinois at Urbana-Champaign, non-bee pollinators, including flies, beetles, moths, butterflies, wasps, ants, birds and bats, perform 25% to 50% of the total number of visits to crop blossoms. That means honeybees complete from 50% to 75% of the job. For some crops, bees perform most of the work. With some crops, like almonds, only honeybees can provide pollination.

According to the American Beekeeping Federation, “Honeybees contribute nearly $20 billion to the value of US crop production.”

Colony collapse disorder, a scenario in which most of the worker bees inexplicably abandon a seemingly healthy hive, has reduced the number of honeybees by 50% in the past decade. Bee supply is only one issue to pollination. Farmers have only a limited window of opportunity for their trees to become pollinated. Bees don’t fly at night, during cold weather or when it’s even a trifle windy.

Drones can do all of those things while covering 40 acres per hour, skimming 10 feet over the trees.

Drones can be programmed to pollinate every single tree in the orchard, unlike their small, striped counterparts. Every time a Dropcopter employee operates drones, a flight plan must be filed with the FFA. The company does not allow the growers to operate drones.

In 2016, Dropcopter moved to Syracuse and found a good place to grow at Centerstate CEO’s Tech Garden. The Genius NY Program also helped get Dropcopter off the ground. Fine said that Dropcopter serves orchards across New York as well as maintaining a presence among California growers.

Dropcopter is also looking at preventive application of pollen, which may help curtail the spread of disease from contaminated pollen.

They’ve explored getting into crops such as pumpkins and row crops like corn and soybeans. Most of the firm’s research is taking place in New York state — another boon for the local economy — with organizations like Cornell University and growers such as Beak & Skiff Orchards in LaFayette in 2018. Unfortunately for the sake of the research, the weather was perfect for bee pollination.

Dropcopter moved from San Francisco to Syracuse in 2016. Based at CenterState CEO’s Tech Garden, the company has established partnership with Cornell University and local growers.

“Dropcopter has data to back up their findings but from my perspective, it was a perfect spring,” said Peter Fleckenstein, Beak & Skiff partner and general manager of fresh fruit and juice operations. “Every day during full bloom, it was warm, the sun was out there was no wind and the bee work was phenomenal.”

While he felt impressed with the drone’s efficiency, he wished he could have seen it operate during a less optimal season so he could really see the difference between the treated portion of the experiment and the control.

Fleckenstein also noted that so far, bees have been able to successfully pollinate the orchards at Beak & Skiff and he hasn’t faced a season when he couldn’t obtain rental hives. He added that “the concept of Dropcopter is great” and that he would recommend Dropcopter to growers experiencing issues with pollination.

Fine said that Dropcopter plans to use the prize money to work on research and development.