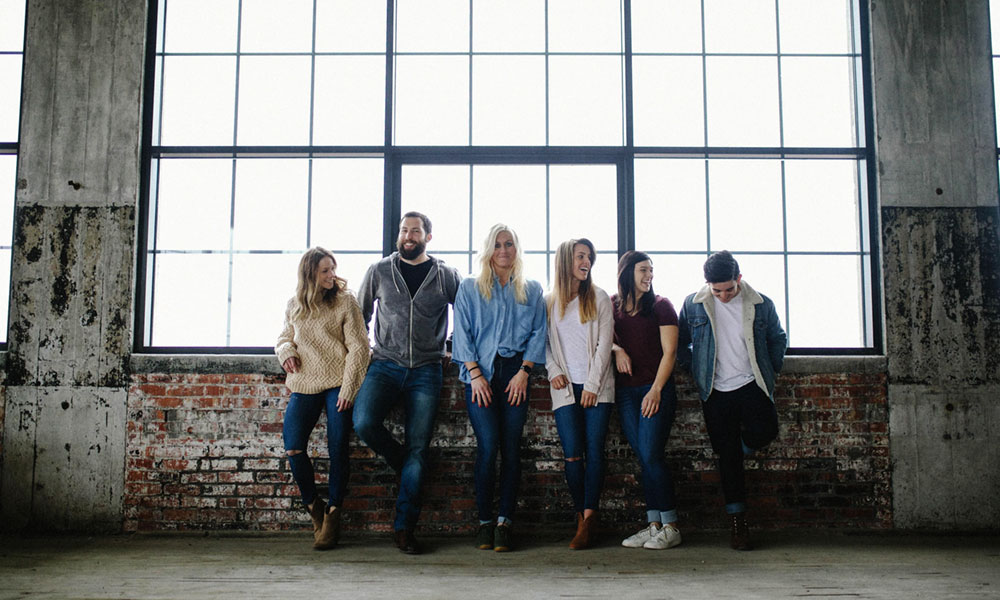 Models wearing Jaxon Jovie jeans. The company, based in Clay, is increasing its marketing efforts. “We didn’t want to market until we were 100% sure the product was right,” owner John Timmerman said.

If your lower body is muscular and fit, you likely can’t find jeans that fit. That’s the problem John Timmerman faced after he started working out more intensely and becoming stronger.

“My thighs were getting bigger,” he said. “I liked wearing jeans, but they were uncomfortable. The ‘athletic fit’ wasn’t even a good fit. They increase the size of the pattern but didn’t change it.”

Wearing bigger sized jeans to accommodate larger thighs and a muscular backside means the jeans have a bigger waistband — not a good trait for someone with a slim, ripped waist. Timmerman said that many people with a muscular, lean build either avoid jeans — plenty of athletic wear fits their body type — or they wear too-large jeans with a belt.

He wanted to offer another option.

Timmerman spoke with his then-girlfriend Lindsay Dillon about the problem. The couple had been dating two years. She suggested that he start a company. He kicked around the idea for a while until in 2016 he began the process of launching what became Jaxon Jovie (www.jjforthepeople.com), a specialty clothing company creating men’s and women’s jeans for athletic body types.

Timmerman started Good Monster, a marketing agency, eight years ago in Syracuse. He knew about entrepreneurship and promotion, but nothing of the apparel industry.

“I Googled everything and tried to find someone who knew what he was doing,” Timmerman said.

He used office equipment he already had, self-funded other aspects of the business and used credit to fund a production run for jeans.

Timmerman tried to find a clothing manufacturer in Central New York, then broadened the search to Upstate, New York City, and the entire Northeast; however, most companies in the area simply outsource clothing manufacturing to Los Angeles. That’s what Timmerman eventually did, while maintaining a small warehouse and the company headquarters at his home in Clay. He renovated a freestanding garage to provide space for Jaxon Jovie.

“I wanted it to be American-made and we were able to stick with that,” Timmerman said.

He does some of the finishing, like hemming, repairs and distressing, at his home. Jeans start at $99.

He and Dillon chose the name “Jaxon Jovie” as it’s a mash-up of their dogs’ names, Jaxon and Jovie. Enjoying dogs is part of the company culture and resonates with many of their customers who take their canine pals everywhere, from hiking to the gyms. Timmerman said that it’s also a name that sounds masculine and feminine to reflect that the company makes clothing for both genders.

Using contractors for clothing design and outsourcing the manufacturing keeps their company as lean and nimble as their customers.

Timmerman said that they look to their customers for input for inspiration in their jeans’ design. It’s not only about the fit. Details such as pockets on the thigh large enough for smartphones represents Timmerman’s knowledge of what customers want in an industry often tone deaf to their market.

Timmerman said that he directly and personally solicits customers’ thoughts.

“Some of them, we shoot them a text and say, ‘What do you think about us doing this?’” he said. “It makes them feel special and gives us feedback. We’re lucky enough to have good communication with our customers.”

The first year, 2017, the company offered about 50 pre-sale items to family and friends to test out the styles, along with T-shirts and hats to get the word out.

By 2018, Timmerman felt confident enough to start offering jeans in different sizes for customers to try on. He spent all summer from the end of May until September traveling in his RV with products to Crossfit events and other places in Albany, Nashville, West Palm Beach, Connecticut, Madison and other venues, showing and selling his wares to buff customers. Dillon would fly out to wherever he was to help promote Jaxon Jovie. They moved about 500 pairs, which is pretty good considering summertime is usually slow for selling jeans.

After he came home, Timmerman and Dillon wed, a capstone to a very busy summer.

So far this year, the company has sold more than 500 pairs. That doesn’t represent huge growth, but Timmerman accounts that to their staying at home this summer. Timmerman hasn’t been pushing marketing hard, as he wanted the company to develop a solid customer base before ramping up promotion. In fact, this season is the first time he’s really marketed the company digitally.

“We didn’t want to market until we were 100% sure the product was right,” Timmerman said. “We wanted slow and steady growth to get the foundation customers. We’re using some influencers and people on social media who align with our customer values. We’ll start with things like Facebook ads and potential customer base who hasn’t heard of us yet.”

Timmerman would like to bring some of the manufacturing aspects to Syracuse, even if it’s only alterations, hemming and free repair.

As another goal, he wants the company to represent an exception among denim apparel producers that typically aren’t sustainable.

He and Dillon source denim from a more sustainable factory that recycles water, filters out the chemicals, uses more natural dyes to try to make the process more environmentally friendly. They’re also working on a pilot program to offer members perks including a buy-back when they’re finished with their jeans.

“We’ll give them credit to buy a new pair of jeans,” Timmerman said. “We’ll find a good home for them or recycle them.”

He hopes to launch the program sometime next year.