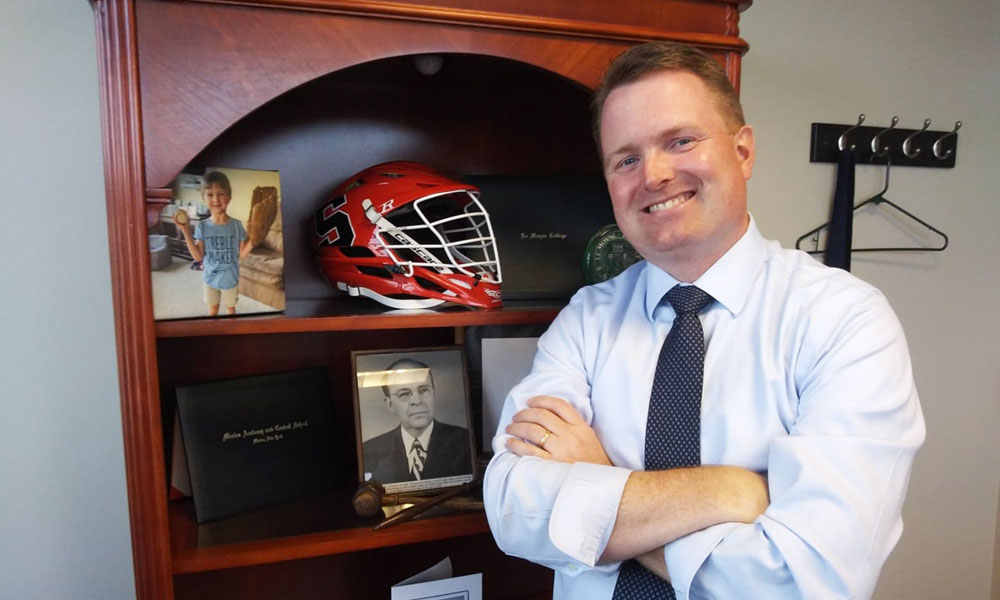 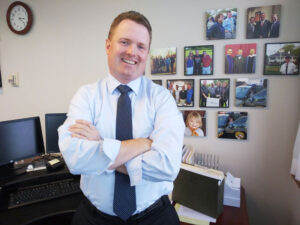 At 29, Michael C. Backus was elected to the post of Oswego County clerk in 2012, the youngest to ever hold that position in New York state.

Now at the age of 36, he was recently named executive vice president and chief operations officer at Oswego Health.

The Mexico resident has hit the high note at a relatively young age and the future looks promising for a man whose roots are firmly entrenched in the community.

He is ready to parlay his family background in community journalism as well as his experience in government administration and healthcare into a positive career as a respected leader.

He recently resigned as clerk, leaving the post to take over as Oswego Health’s second in command. The health system is the third largest private employer in Oswego County with more than 1,000 employees, according to the 2020 Business Guide.

Backus has the challenging role of stepping into a high-level leadership spot in the midst of a global pandemic.

“When I first started discussing this opportunity with my family, the pandemic was certainly a topic of discussion,” he said. “As an eternal optimist, I will always try to find positivity in a situation.”

Backus said as an independent health care system, Oswego Health is positioned to provide quality, safe health care throughout the pandemic and will have the ability to attract providers who may be looking to get away from high-density population centers.

“That’s an advantage for us and through some strategic partnerships, I believe we’ll be able to maintain that independence and grow the organization,” he said.

His father, Mark H. Backus, was a third-generation owner of the Mexico Independent and published several weekly newspapers throughout Oswego County.

“Watching my father from an early age lead a business that my grandfather and great-grandfather built only to have social media transform the entire industry was hard,” he said.

Backus loved working in the shop and hearing the printing press roar and shake the entire building.

“There was tremendous pride when I told my father that a group of friends and I started a school newspaper,” he said. “I loved writing and selling advertising for the weeklies for a few years after college. It was and is in my blood so to speak.”

The experience shaped Backus as a professional because it instilled a sense of responsibility.

“We had a responsibility to provide community journalism, refrigerator journalism, to Oswego County that mattered to our neighbors,” he said. “We didn’t print the police blotter or gossip columns. We shared the triumphs of the local high school sports team or what’s happening this week at the VFW.”

He said this helped spread good cheer and build community.

“That’s so important in my mind in today’s world when we truly need each other more than ever,” he said.

Backus said COVID-19 will present a number of behavioral health challenges as the history on this time period is written and some of the lessons he learned working for the weeklies will help Oswego Health and himself provide those services to the community in a meaningful way.

“We will emerge from this pandemic in a variety of ways and as we rebuild our lives, we’ll need each other to do so,” he said.

Backus said his educational experience at Le Moyne College in Syracuse helped shape him into the person and professional that he is today.

That was a primary reason he agreed to join the Board of Regents at Le Moyne College.

“There is something uniquely special about the Heights and being a Dolphin,” he said as he referred to Le Moyne’s mascot.

Backus became committed to the college’s mantra of “Be the change you wish to see in the world.”

“It truly is emblazoned upon my soul and now stepping into this role in health care, I very much want to live it and better the health care outcomes in Oswego County.”

Backus said being a native of Mexico helps in terms of understanding the health care needs of county residents and the need for access to quality health care.

When he was on the board at Oswego Health, he and Bernhards Bay resident Ellen Holst would regularly remind fellow members — most of whom live in or around Oswego — that the board’s primary service area and opportunities to grow go well beyond the city.

“Certainly access to care is a concern and eliminating as many of those barriers is going to be a focus of mine both as an employee now of Oswego Health, but also in partnership with ConnextCare and other primary care providers,” he said.

In 2007, former U.S. Congressman and former Army Secretary John McHugh hired Backus to serve as a field representative. He was promoted in March of 2009 to field director.

McHugh served the constituents of the 23rd Congressional District, which spanned from Lake Champlain to Lake Ontario.

Backus and his wife Andrea have a daughter Madelynne and a son, Joseph.

Andrea is a coach that does streaming fitness workouts on Beachbody on Demand.

“I don’t stick to any set regimen, but my wife sticks to a really lean, healthy diet,” he said. “That has helped me eat better and try to set a good example for our kids.”

“They eat pretty much what we eat and having them learn that salmon or flank steak is better than processed food will hopefully set them on a healthy eating life course,” Backus added.

That’s not to say the family doesn’t enjoy treats, albeit in a limited manner.

“I also very much enjoy walking the golf course whenever possible,” he said.

Before COVID-19 struck, he joined a group of his high school friends and started playing basketball outside at Oswego High School.

“I try to stay active as much as possible and now that gyms are sort of back open, I’d like to get into a routine,” he said.

Backus notes that he has seen many people claim to have an effective work-life balance, but sometimes that is not the case and they pay a long-term price for that.

“I am pretty grounded when it comes to my home life,” he said. “My kids ensure that I know what Barbie is out or what new monster truck Grammy or Grandma bought. So they definitely are my beacon call every night coming home.”

“Finding time to make dinner gives me an hour or so of uninterrupted focused mindfulness,” he said.

Backus said stepping away from the county clerk’s position was a difficult decision and one that he did not make lightly.

“I definitely learned over the seven-plus years I served in county government that there are some tremendously dedicated people who are subject area experts in their field,” he said.

“They both run their divisions with professionalism and an eye toward quality that is not always found in government,” the Syracuse native said.

“I’ve always strived to be a good listener. Whoever came up with the saying, ‘You have two ears and one mouth — they should be used in proportion,’ knew what they were talking about,” he said.

When he started as clerk, Backus sat down with county employees to understand his or her perception and spin on the world.

“I took those conversations and developed approaches that strategically positioned employees to be successful for their specific tasks,” he said.

Oswego Health is a significantly larger organization than county government, but Backus said his initial approach has been the same.

“Listen first, learn the culture and what culture needs to be built, and then implement strategies to help ensure employees are set up for success,” he said.

Backus’ experience on the boards of both Oswego Health and ConnextCare is helping him transition into his new position and understand the health needs of area residents.

He resigned from the board at Oswego Health when he started discussing potential employment to ensure that there were no ethical conflicts, but he does continue to serve as chairman of the board of ConnextCare, a nonprofit corporation and a federally qualified health center with a network of primary care practices that serve people in Oswego, parts of Jefferson and Onondaga counties.

“I believe strongly in board service,” he said. “We need more community members willing to dedicate their time to serving on nonprofit boards.”

He said board and community service gives participants a high level of understanding in regards to the important work that is done by each entity.

“I’ve always grown as a person and a professional from serving on these boards as it broadens your worldview, which is always something I strive to do,” he said.

Affiliations: Member, National Association of Community Health Centers (serves on the legislative and credentials committee; chairman of the board, ConnextCare