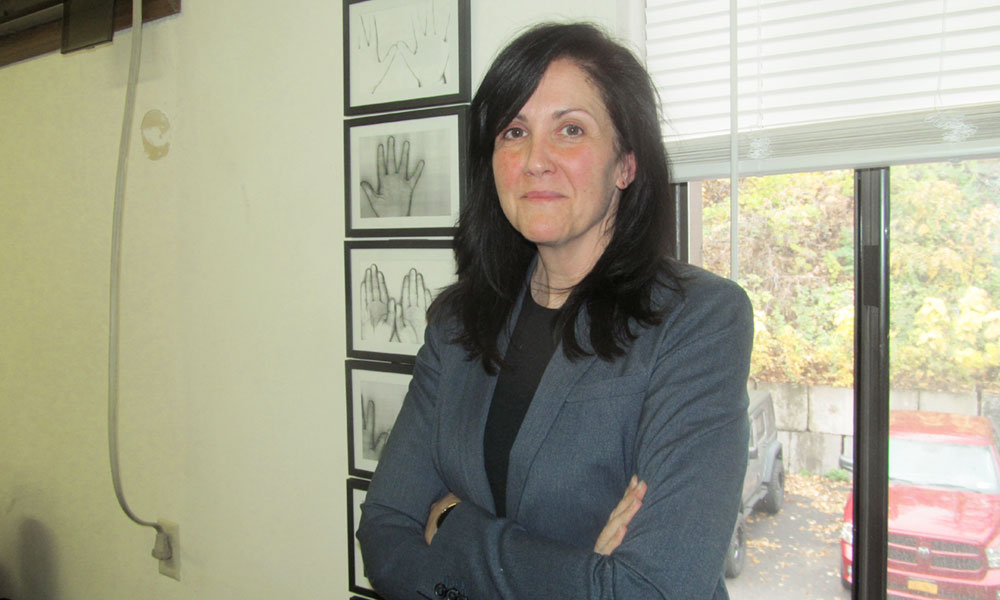 After pursuing several career opportunities elsewhere, Shatrau has returned to her hometown of Fulton to take over as CEO and president of the family business — N.E.T. & Die, Inc. She succeeds her father, Richard, in the position.

She grew up in her father’s machine shop and operated equipment when she was in high school and college.

“My father has built a robust company over the last 40 years with a niche that is hard to develop in this competitive environment,” she said. “I am very proud to be taking over what he has built.”

“My dad has some pretty big shoes to fill. He is a true machinist and has been for over 50 years,” she said. “While I will never be the machinist he is, my strengths and skills are growing a profitable company that we can all be proud to be a part of.

“It makes me sad to think about a time when my dad won’t be part of N.E.T., but I’m preparing myself for that day, both professionally and personally.”

Shatrau’s educational background opened up many doors during her career.

Prior to becoming the leader at N.E.T. & Die, Inc., she spent 20 years with medium and large manufacturing corporations in a variety of disciplines and functions, including aerospace, hand tools and household appliances.

She spent more than seven years working for the Whirlpool Corporation as a target costing project manager, North American regional manager-Design for Value and project manager.

Prior to that, she began her career working as a manufacturing engineer for Pratt & Whitney in Middletown, Connecticut. In 2003, she became manufacturing supervisor at Danaher Corporation in Gastonia, North Carolina.

She then was a value stream manager at Gast Manufacturing in Benton Harbor, Michigan.

Her engineering degree gave her the foundation to be a critical thinker and a team player.

“I believe these are two critical skills anyone needs to have to be successful in most careers, she said.”

“While my succession [at N.E.T. & Die] was never in the plan until three years ago, I believe not having a plan was the best thing that could have happened,” she said.

“I’ve been a part of great operations and not-so-great operations. I’ve had amazing leaders and some leaders that I’d rather forget,” she said. “I have learned from each and every experience, and bring all the best practices back to N.E.T.

“I never imagined my career path would have ended up being the best training program for running a business, but it has.”

Harry Shatrau established N.E.T. & Die, Inc. in 1966, providing manufacturing for maintenance of customers’ machinery as well as direct manufacturing support for many original equipment manufacturers. Beginning in 1981, his three children, Richard, Helena and Bob — continued the business operation and expanded the business and services to its customers.

To improve manufacturing operations, N.E.T. & Die, Inc. will be moving operations into a new 60,000-square-foot building slated to open in 2022.

Her father was 75 when the pair started talking about what they were going to do with the business.

“He was ready to retire and we had no plan. I stepped in to help evaluate our options back in 2018,” she said. “Owning and operating a job shop is tough and my father didn’t see that as a better option for my career than the path I had been on.”

However, Michelle Shatrau saw it differently.

“While I don’t disagree this is a fierce business, I saw all the opportunities and potential for the company,” she said. “I planted the seed and at the end of 2018, we made the decision that I would succeed in running the company.”

Shatrau brings strengths and a set of skills to the table as the leader at N.E.T. & Die, Inc. that include tenacity and big picture thinking.

She embraces lean leadership, and sets the vision, develops the culture and measures the success of the company.

“Lean leadership is a style of leadership that empowers those on your team,” she said. “Coaching, active questioning and listening, learning versus knowing, and the relentless pursuit of improvement is a mindset that I have and I am training my staff and employees to have.”

She said the person “cutting chips,” or cutting materials by mechanical means, is the most important person in the organization.

“The rest of us need to figure out how to make their jobs more efficient and effective by delivering lower cost, better quality products, and delivering them when our customer demands,” Shatrau added.

In terms of business activity, Shatrau said the company has seen an uptick in material handling and the storage solutions end of the business as 2020 winds down.

“This may be due in part to the seasonality of those customers,” she said. “October has seen a significant increase in sales overall.”

Despite the challenges presented by COVID-19 this year, N.E.T. & Die, Inc. saw a couple smaller customers who cancelled or delayed orders due to the pandemic.

“But because most of the companies we support are essential businesses, we haven’t seen a negative impact,” she said.

“We are actually growing,” said Shatrau, noting the company recently hired a sales person, Jim Stolo, who has an extensive background in engineering and machine sales.

“We’re taking on new customers and new business,” she said. “Because of that, we currently have three open positions in machining and we’re looking to add a second shift to distribute the capacity on our machines that are overloaded.”

N.E.T. & Die, Inc. recently donated $10,000 to benefit the ALS Association of Upstate New York. The donation was made in honor of 25-year company employee Nelson Walter, who was diagnosed with ALS in 2014 and died in 2018.

“Nelson was the first quality inspector at N.E.T. & Die. He brought with him new measuring equipment as well as processes, knowledge and practices that allowed N.E.T. to become a product provider of unmatched quality. Nelson was truly a voice of the customer,” she noted.

Outside of work, Michelle’s father, Richard Shatrau has competed in the Adirondack Canoe Classic, a 90-mile canoe race, for 13 of the last 20 years.

“At some point, I stopped wanting to be part of his pit crew and wanted to start paddling with him,” Shatrau said. “I’ve completed the 90-miler three times, the first two with my father. He was in his 70s when I completed my first race with him.

“He’s always been competitive and an athlete. I’m lucky to have inherited that gene.”

In terms of lifestyle choices, Shatrau breaks it down into simple terms: “Everything in moderation and keep moving.”

“I don’t believe there’s any one right answer when it comes to lifestyle choices,” she said. “I try to put as many greens into my meals as possible and stick to a workout plan.”

“As my work demands have increased over the last year and a half, I found it more important to stay connected with my friends and family in order to maintain a healthy balance,” she said. “When that balance is not maintained, it affects everyone around me. I make more of a conscious effort to take a mental break and to connect with those closest to me. Of course, staying active is always part of that balance.”

Shatrau considered the possibility of a fourth generation  family ownership down the road.

“Of course we would love to see an N.E.T. succession plan with fourth generation, but only time will tell,” she said. “At 12 years old, my daughter is more interested in her friends than her career goals.”