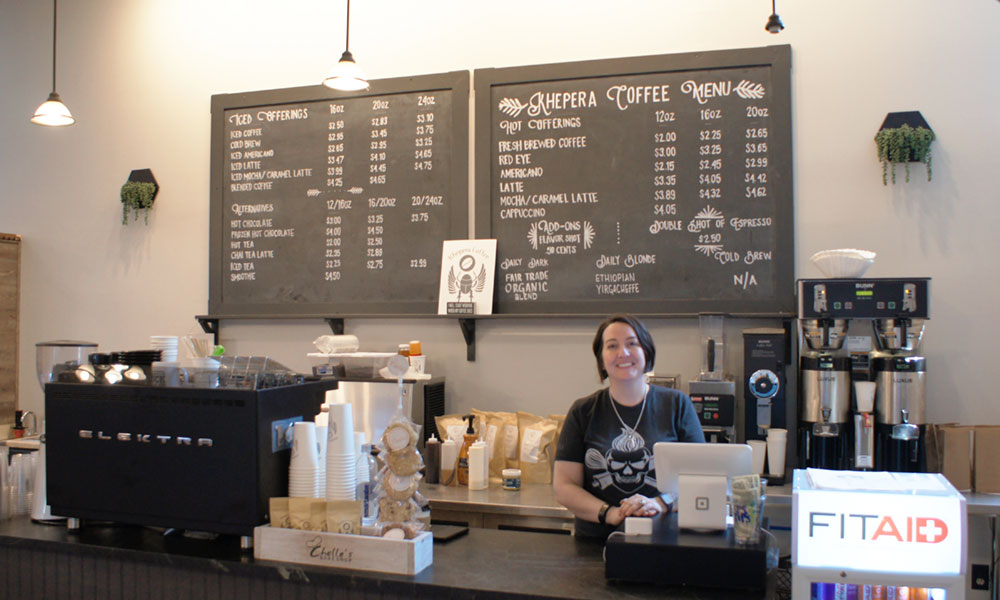 Jessica Spano at her new Khepera Coffee, which opened July 17 in the Canal Commons, Oswego.

Opening a business a ‘dream come true” for entrepreneur

Jessica Spano wants to be the person to give you your morning coffee, and she’s opened a café in downtown Oswego to do just that.

Khepera Coffee opened on July 17 in the Canal Commons, serving specialty coffee and tea. It’s in the same location as Taste the World, another coffee shop that closed its doors over the summer.

Spano, who has worked in the hospitality industry for 16 years, said that she has always wanted to open her own coffee shop. After working at Taste the World for four years, the opportunity arose for her to open Khepera Coffee.

“This is a dream to me, I look around and have to pinch myself,” Spano said.

The name Khepera comes from ancient Egyptian mythology, where the god Khepera, who is often represented by a scarab beetle, signified renewal and new life. Egyptian religious texts indicate that they believed Khepera was responsible for raising the sun every morning. Spano said that she found the meaning very appropriate, both for what the café does and in what it represents to her personally.

Spano said that she has put herself fully into the creation of the Khepera Coffee brand, developing the look, its mission and its menu to reflect herself.

“This is my thing, it’s me, a visual representation of my personality,” Spano said.

“There’s a lot of problems in the coffee industry these days, or not necessarily problems, but opportunities,” Spano said. “Farmers don’t get paid well. Most people don’t think of coffee as an agricultural product, but it is one, it’s traded as such. Farmers get barely anything for a pound of their beans. They’re starting to change over to different crops that make them more money.”

Spano works with a distributor that focuses on getting the kind of coffee she wants, but said that she would love to directly import specially grown beans for the café, if the logistical and bureaucratic hurdles were easier to overcome.

Spano is running the café by herself as she gets it up and running but plans to have a full-time position alongside her soon. Oswego’s revolving loan program requires recipients to create one full-time position within 12 months of opening.

The path to opening has not been entirely smooth for the café, according to Spano. Two of the major pieces of equipment that she purchased for the café came in broken, causing delay and increasing costs.

“There were a million bumps in the road getting here,” Spano said. “It was so bad. My ice machine that I bought second hand didn’t work. One of the two espresso machines that I had didn’t work. I got so fed up, I bought a new one of each and committed to that.”

Spano already has long-term goals set, once she finishes laying the final touches on the opening. She said that a second location somewhere in Oswego County, a mobile truck and delivery within the city are all in mind for the future.

“I just basically want to be successful,” Spano said. “I never even thought in a million years that I would have the opportunity to do what I’m doing here.”