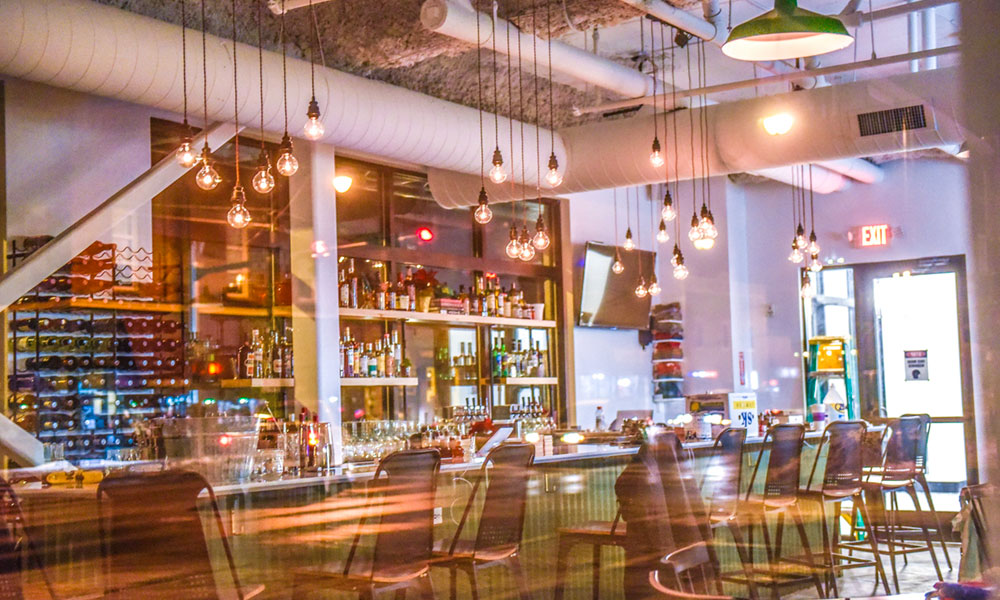 The bar at Southern Fare, located on the ground level of Litatro, a building in the heart of downtown Oswego. Photo courtesy of Elizabeth Canfield Photography.

It’s the story of twin lifelong dreams that met a once-in-a-lifetime moment. Oswego’s two newest restaurants, located right across from one another on Bridge Street, opened this January in spite of the COVID-19 health crisis that has shaken the country’s economy and turned the dining industry on its head.

Over the last year, dozens of restaurants in Central New York have been forced to close. Some even shuttered for good due to the drop in traffic and government restrictions on in-door dining. Others have entered a temporary hiatus as their owners await better conditions.

But Sherry Babcock, owner of Sherry’s Downtown Diner, and Patrick Mitchell, owner of Southern Fare, are forging ahead, unwilling to let their passion be sidelined by the pandemic.

“It wasn’t ever about whether this would happen but was a point of how do we make it happen,” Mitchell said. “We’ve got to figure this out, we’re going to make it happen, and that was the mentality.”

Southern Fare is located on the ground level of Litatro, a new addition to downtown Oswego that is hard to miss. The towering mixed-use building at the corner of Bridge and First streets features luxury apartments and commercial space, including Mitchell’s restaurant. The eatery features a southern-inspired menu and other culinary creations that reflect Mitchell’s travels. The Oswego native spent years refining his craft in several capitals of American cuisine: New Orleans, New York City, Las Vegas and Boston.

“My business here is sort of a collection of all those experiences that I’ve had, really highlighting the southern hospitality that I grew to love in New Orleans,” Mitchell said. “It’s something I’ve always wanted to do and we had kind of always had our eyes on moving back home, so it was just about how do we do this, how do we make this happen?”

Babcock’s restaurant, located right next to The Children’s Museum of Oswego, is also the culmination of experience and plans. She had worked for years as the general manager of Friendly’s in Oswego, gathering a loyal base of customers along the way. That came to an abrupt end in April 2019. Babcock was among the group of employees who was literally left out in the cold when the company suddenly closed the restaurant’s doors in April 2019 without any prior notice.

That incident, although frustrating, inspired Babcock to finally go out on her own. This was the opportunity she was waiting for to realize her goal of opening a restaurant, and to boot it would provide a place for her former colleagues to work and her former customers to dine.

“When Friendly’s closed, the family dining experience that involved the kids and the fun and all of that was gone,” Babcock said. “So, we decided to give them back that sense of community, a place where you could bring your kids and have all of the same foods they loved and be relaxed. And this is just mine. I don’t answer to anyone except myself.”

As fate would have it, both restaurateurs committed to opening their businesses in 2019, the year COVID-19 was born.

Mitchell moved home that summer at the same time Babcock was starting her project. In the months leading up to their respective opening days, the two were confident that they had thought of everything. Little did they know those plans, much like everyone else’s, were about to be upended.

When COVID-19 struck, the entire state of New York came to a screeching halt. The New York ‘pause’ required everyone except essential personnel to remain at home. Even though those working in the food industry were considered essential workers, restaurants were relegated to takeout service only. It was a daunting moment for those in the business and conditions did not improve much over the coming months. Restaurants were eventually permitted to reopen but faced capacity limitations and even when owners had open seats, they sometimes struggled to fill them because of fears over the virus. Local staples shuttered for good, changing the landscape of Central New York dining forever.

Neither Babcock nor Mitchell changed course, though. They marched on, ready to rise to this challenge.

“When someone says, ‘gee what are you doing — this is a tough time to open a business,’ I say we’re making it work,” Mitchell said. “You can always find a reason as to why you shouldn’t try something. If you truly want to do something, you figure out the way.”

Opening a restaurant in the shadow of this pandemic has proven difficult at times. Babcock had to delay the opening of her diner by almost four months and Mitchell said equipment and other items that were once readily available to restaurants can now take weeks or even months to receive. Southern Fare was forced to start with a soft launch as a result, offering takeout in mid-December while they waited for the long-delayed furniture to arrive. But both Babcock and Mitchell say the restaurant industry has never been easy, which is what makes the victories all the more rewarding.

“There’s going to be ups and downs to this business, that’s how it’s always been,” she said. “But we’re there for the community, that’s why we do this.”