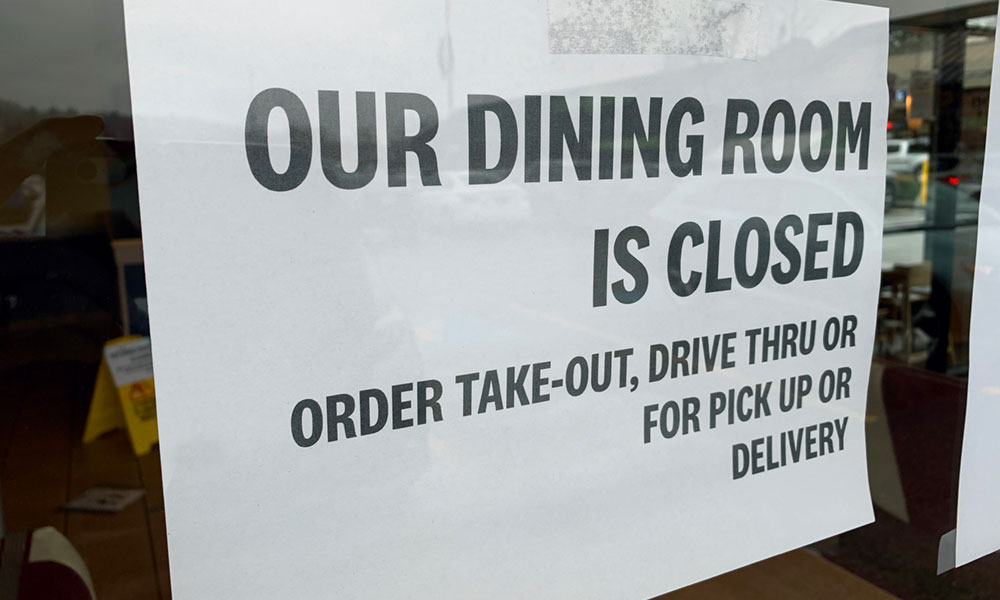 Restaurants may be among the first permanent victims of COVID-19.

As new cases of coronavirus infections surge across the country, many restaurants have reportedly been forced to take dining services outside. However, new bans on outdoor dining as well as cold weather have forced some of them to permanently close altogether.

Other restaurants may not survive the next few months, according to food service experts.

One in six restaurants open in March will have closed for good by year’s end, according to a survey by the National Restaurant Association. That same report shows nearly 3 million employees are still out of work, and the industry is projected to lose $240 billion in sales by the close of 2020.

Without a comprehensive relief package specifically for restaurants, 63.6% of New York restaurants said they are likely to close by the end of the year, according to the most recent survey from the New York State Restaurant Association.

Nick Canale, owner of Canale’s Restaurant in Oswego, said recently his establishment will not be in a situation where it is forced to close.

However, “if we don’t get some help to get through the winter, we will be laying off a significant portion of our workforce,” he said.

Normally, staff numbers around 75 at his restaurant, but workers now number in the mid-60s, he said.

“We’re trying to keep as many people on as we can right now,” said Canale, noting he is reluctant to lay off workers right before the holidays.

Regardless of government-mandated COVID-19-related restrictions on dining out, Canale said he is not seeing a lot of dining business anyways.

Based on projections on the pandemic, Canale said it is going to be a challenging winter.

The restaurant offers curbside pickup, which was highly popular during the height of the pandemic. Canale said he anticipates demand for that service to escalate in the winter.

“Right now, there is a significant amount of delivery and people are comfortable enough to come in and pick up food,” he noted.

Canale foresees conditions getting better by next summer.

“I don’t think it’s going to be back to normal until at least another year,” he said. “People will be more cautious and reluctant to get out and do things.”

“We had really great support from the community,” said Canale, noting that city leaders made it possible for his establishment to create expanded outdoor dining opportunities.

While that measure made a big different for the restaurant, winter weather meant reduced indoor dining traffic.

Without a comprehensive relief package specifically for restaurants, 89.7% of New York’s restaurant owners say that it will be very or somewhat unlikely that their establishments will be profitable in the next six months, according to NYSRA.

Canale said it is very unlikely that he will turn a profit over that time frame.

“It’s safe to say that without the Payroll Protection Program, we wouldn’t have been able to operate from May through July time frame,” he noted.

The PPP, managed by the U.S. Treasury Department, is a U.S. Small Business Administration implemented loan designed to help business owners keep their workforce employed during the COVID-19 crisis.

“It wouldn’t make any sense for us to even be open,” Canale said. “The fact that we had that money allowed us to keep staff that we wouldn’t have been able to keep.”

“Going into winter, we’re going to have to make some hard decisions in terms of what we can do for our employees,” he said.

In the summer and fall, people had the opportunity to dine outside.

“We did much better in the warmer weather months when we could expand our dining,” said Canale while giving thanks to city of Oswego Mayor William Barlow and the Oswego Common Council for supporting that measure.

“It made a big difference for us and our employees to be able to have all that space outside where people could feel comfortable sitting in,” he said. “When we lost most of our dining business is when we lost that space because of weather.”

Dustin Trimble is the general manager of The Eis House in Mexico.

As the second wave of COVID-19 made its appearance in the fall, Trimble and his team were already familiar with the process of making necessary but painful staff cuts and realizing limitations on what they can offer.

The Eis House employs 23 workers, 10 of which are full time.

“We did furlough a little less than half of our staff at the beginning of the pandemic,” Trimble said.

But without special events such as weddings, there was no reason to bring back the entire staff.

“That is unfortunate for both the people getting married and the staff,” he said.

Fortunately for Trimble, his business is diversified enough to withstand threats such as COVID-19. The Eis House also creates revenue streams through lodging, catering and storage units.

“Hotels and storage units are not being affected as much as the restaurant side,” he said.

“We’re positioned to make it through this, but without those income streams, it might be a different story,” he said.

“It’s a little scary,” Trimble said. “The whole goal right now is just to break even.”

The Eis House features more than 10,000 square feet of space.

“We have a lot of overhead, most of it sitting dormant or being underutilized,” he said. “To say we are going to make money over the next six months or so is a long shot.”

Trimble said the pandemic has put his management skills to the ultimate test. He said it is critical to make the right decisions in terms of expenses while communicating effectively with people.

He said the luxury of having time to think about various processes and options is history as more snap decisions become the norm.

Trimble said the thought process in terms of how to solve issues has changed.

“Before, it wasn’t always about the cheapest way,” he said. “Now, it’s about how to utilize the assets we have to solve problems.”

The operation has significantly changed, including the way the kitchen operates, the number of staff on duty and different purchases that are made.

Trimble said the pandemic has forced him to look at aspects of the business that were not doing well, whether it be a menu item or product the business offered.

“You focus on more of the core things,” he said.

Efforts were made to offer a diversity of products in terms of food and beverage while also cutting down on items offered in a way to streamline the menu.

Trimble follows a “just in time” inventory style, which is difficult to do with food.

“The beverage side of things is a little easier. But with food, to maintain the smallest inventory possible is not an easy project,” he said.

Projections called for 2020 to be the best year for Trimble in the past six years.

Trimble does hold out hope that 2021 will be positive from a business perspective.

“I do worry that the bar side of things will take years to come back,” he said. “That will be a very slow return to what it was, if it ever does.”

Trimble participated in the PPP, a federal measure to help companies retain workers by covering eight weeks of payroll. The loan would be forgiven if 75% of it were spent on payroll.

He said the rules regarding the PPP were changed so that it would impact a business’ profit and loss statement, a measure that “will very much hurt a lot of businesses” from a tax perspective.

Also, the program covered payroll over only an eight-week period of time, which Trimble said was “quite a task” considering limited revenues.

The PPP was enhanced in June by increasing the time small businesses can use funds and receive forgiveness from eight weeks to 24 weeks and by reducing the payroll cost rule from 75% to 60%.

“We had already burned through 75% of it after receiving that notice,” Trimble said. “That wasn’t helpful at all.”

However, he said the funds were appreciated and they did take the edge off regardless of possible adverse tax implications.

Trimble said his business model has not changed due to COVID-19.

“Our overall goal is still to provide quality service and provide foods that are made in-house,” he said.

“Most of our core competencies haven’t changed. I think we are better at reacting to things quickly,” he said.

Trimble said plans to upgrade the facility were delayed due to COVID-19, such as redoing the deck on the waterside of the building in order to make it more handicapped-accessible and easier to maintain.

After a lengthy wait, materials for a brick-paved walkway along the river arrived recently, allowing the team the opportunity to attend to a project that was initially forecast to be done in June and July.

Nonetheless, he said the down time allowed the business to rebuild decks, install siding and work on hotel rooms, tasks that would have been virtually impossible under normal business conditions.

“It is painfully clear that without financial assistance, the restaurant industry in New York state could collapse,” said Melissa Fleischut, president and CEO of NYSRA. “These recent survey results illustrate just how dire the financial situation has become for most restaurants, and it shows how critical it is that elected officials understand the urgency of the situation.”

This survey follows others conducted by NYSRA over the past few months during the COVID-19 health crisis. In March, NYSRA reported that in a three-week span, New York restaurants saw an estimated loss of $1.9 billion in sales and more than 250,000 jobs.

In April, NYSRA found that 80% of New York’s restaurant workforce had been laid off or furloughed since the beginning of March, totaling 527,000 jobs.

NYSRA conducted this survey to gain a clear understanding of the current and ongoing impacts of the COVID-19 pandemic on New York restaurants.

When asked what government could do to help their businesses to survive the pandemic, the top three answers were provide commercial rent relief, insist that business interruption insurance claims are paid and increase the capacity for indoor dining.

No Workers? No Problem!