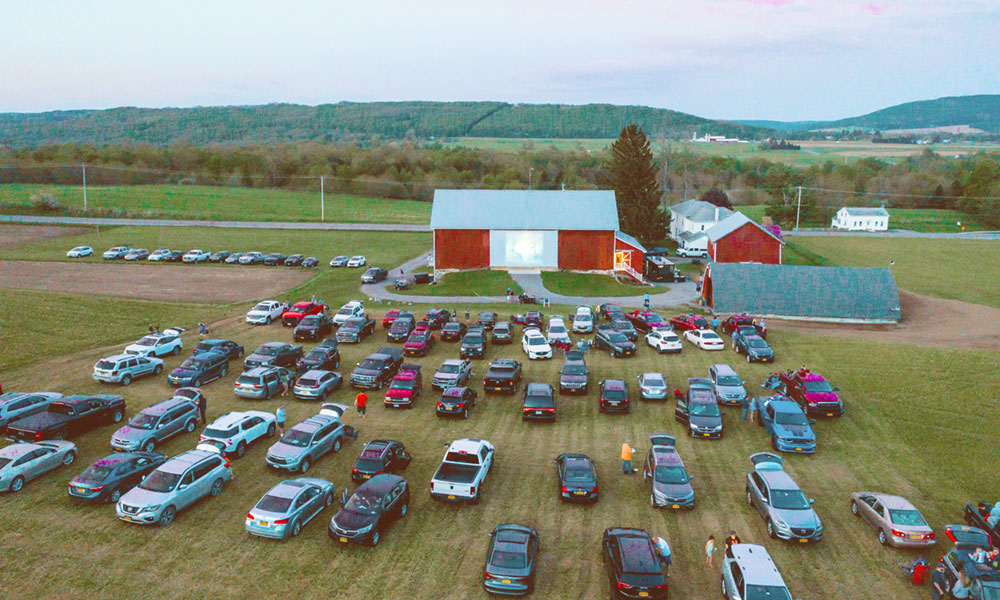 Arlington Acres, a 100-acre farm in the town of Fabius, has been converted into a drive-in theater. Owner Katie Hatch Jerome says tickets forthe movies usually sell out within 30 minutes. Photo courtesy of Lisa Rossi.

Arlington Acres has been unusually quiet this summer. The 100-acre farm in the town of Fabius is a venue site that accommodates up to 200 people and its wide-open spaces and 2,500 sq. ft. barn are popular during wedding season. In fact, the business started as a wedding venue in 2016 when the owner Katie Hatch Jerome converted her grandparents’ old dairy farm for her own ceremony.

In recent weeks, though, Jerome has been readying the farm for a different kind of event: a drive-in movie theater.

The idea was to generate some revenue and exposure for the business as well as give the local community something to do. Little did Jerome know how much that was needed. Arlington only had 100 spots available for the first show, but the business received more than 5,000 interested responses on Facebook. Tickets sold out in 30 minutes.

“Based on the overwhelming response, it quickly became clear that this was something the community was looking forward to and something that we should make happen,” Jerome said.

Arlington Acres is just one of many drive-ins that have sprung up in recent weeks in Central New York and across the country, attempting to fill the gap left behind by the closure of movie theaters. Some studios have tried to keep their audiences entertained by releasing films direct to consumers, but it didn’t quench the thirst for the collective moviegoing experience.

Paul Meyer, owner of the Finger Lakes Drive-In, said it’s like these theaters are uniquely poised for this moment. Not only do drive-ins have massive screens and a unique atmosphere, they are also able to bring people together with fewer risks than enclosed, crowded cinemas.

“Drive-ins are pretty well set up for this social distancing by their very design,” Meyer said. “You’re kind of with people, but you’re not.”

Drive-in proprietors have taken some precautionary measures to protect their audiences, such as spacing the vehicles out and mandating that face masks be worn when customers are in common areas like restrooms, but local audiences don’t seem to mind. Meyer and Jerome have added more showings to their lineups in recent weeks to meet the demand.

Graziano Zazzara, owner of Villa Pizza Fritte, said this is about more than movies. His family recently set up a drive-in theater in the parking lot of the New York State Fairgrounds after people came out in droves for two drive-thru events to buy the food that Villa Pizza Fritte normally serves at the fair, which has been canceled this year by state officials. Some people waited in line four hours for the food, which backed up traffic in Syracuse so much that the city asked Zazzara to find another location.

“The whole thing we’re doing is getting people out of their house,” Zazzara said. “Everybody feels like they’re in prison right now and they just want to get out. They want to socialize again. They want to feel like they’re alive.”

At its first show, Villa Pizza Fritte screened “Top Gun,” a popular film with a strong following. Yet Zazzara posits that it didn’t matter what they showed, it could have been a silent film or — jokingly he says — videos from his family’s vacation to Italy. Those who are attending these drive-ins don’t just miss going to the movie theater, they miss seeing other people.

“You’re outside. You’re in the fresh air. You can look next to you and there are some other people on both sides of you waving and beeping their horn,” He said. “I don’t think the movie has anything to do with it.”

Jerome said that opportunity to get out of the house after months of quarantine can be beneficial in more than one way for those who struggle with mental health issues. Just having something to look forward to can make a difference for their state of mind.

“We’re in a very small community and there are very few options things for people to do,” Jerome said. “It sounds like something fun for the community, and it definitely is, but it’s more than that for some.”

With this renewed interest in drive-ins, these owners plan to capitalize as long as they can and are even expand beyond just showing movies. These sites are now being used to host graduation ceremonies and other community events, perhaps signifying that drive-ins are not just experiencing a comeback but instead are evolving to become a new gathering place in a world that desperately wants to be together after months of separation.