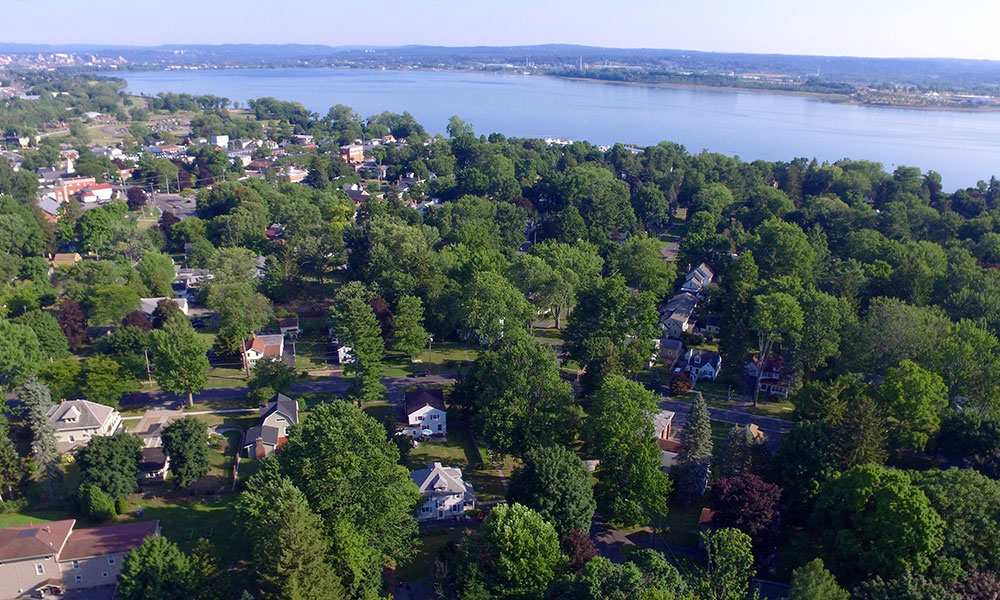 Overview of the village of Liverpool with Onondaga Lake in the background. Photo by Kenneth Sturtz.

After a few slow months, real estate market is hot again, in part thanks to low interest rates, coronavirus pandemic

John and Monica Weber decided in February to sell their four-bed, two and a half bath home in the Hiller Heights neighborhood of Cicero.

The couple had moved there five and a half years earlier and lived in the neighborhood while their children were growing up. Now they wanted to relocate to Florida where Monica’s parents lived. They assumed they should put their home on the market in April.

But Central New York’s real estate market bursts to life each spring well before the snow melts and it pays to be first out of the gate. Their agent at Howard Hanna in North Syracuse told them not to wait to list their property.

“Our real estate agent told us the market was going to be really hot,” John Weber says.

Their home went on the market March 1; they accepted an offer two days later.

In the months since, Central New York’s real estate market has grown even hotter as the COVID-19 virus has helped to create a perfect storm: high demand among buyers who were largely sidelined earlier this year, a dwindling supply of houses on the market, and sellers reluctant to put their homes up for sale in the midst of a pandemic.

After very little market activity in April and May, potential buyers began flooding real estate agencies with inquiries in June and haven’t let up.

“Now that we’ve opened back up and we’re coming back into the marketplace we’re seeing an increase in activity,” says Chris Teelin, president of the Greater Syracuse Association of Realtors. “We’re moving along and it’s keeping everyone really busy right now.”

Demand has steadily pushed prices up. The median sale price in June rose 8% to $152,220 compared to June 2019, according to data compiled by the Greater Syracuse Association of Realtors. The data includes single-family homes in Cayuga, Madison, Oneida, Onondaga, Oswego and Seneca counties.

The limited supply of houses for sale has remained problematic for buyers, but given sellers a significant advantage. Inventory shrank an additional 19% in June to 2,292 units. New listings were also down 21% to 1,147 units.

Stephen Case, broker and owner of Acropolis Realty in Syracuse, agreed that there is a “huge seller’s market” in the area. Agents at Acropolis set an office record for sales in May and then beat that number in June, Case says. They were on pace to outdo that figure in July.

“It’s been a wild ride so far this year,” Case says.

Market conditions have ratcheted up competition between buyers.

Teelin, who besides being the president of the Greater Syracuse Association of Realtors, is an associate broker with Howard Hanna in North Syracuse, says agents in his office have noticed an increase in cash buyers, more properties receiving interest from multiple buyers and sellers getting their asking price or beyond.

“It’s not uncommon to have multiple offers taking place,” Teelin says. “If I’m a seller it’s a great time to sell.”

As realtors charge into what promises to be an exceptionally busy stretch, and homeowners bask in the upside of a seller’s market, buyers have found themselves house-hunting with the knowledge that another buyer might swoop in with a better offer if they wait too long.

The forces driving buyers include exceptionally low interest rates. Some buyers chose to pause their search for a house earlier this year when the COVID-19 virus caused the state to shutter many businesses. Others decided they wanted out of their current house or apartment after months spent mostly stuck at home.

On top of that, the area has had a somewhat lower inventory of properties for sale over the last few years, Teelin says.

“It’s a marketplace today where buyers have to be patient and persistent,” Teelin says. “We’re still able to see buyers get into homes, but they might have to make a couple of attempts on a few different houses.”

The seller’s market has probably been toughest on the very people least equipped to navigate the challenges of homebuying: first-time buyers.

Case says he has seen a lot of buyers frustrated by the market conditions, but none more so than first-time home buyers. One reason is first-time buyers might have more contingencies — such as needing financing — than other buyers and a seller with multiple offers can choose the more attractive one. Also, anyone who needs financing can be beaten out by a cash buyer, Case says.

Some of the challenges for buyers may ease over the summer as more homeowners, enticed by higher prices, decide to sell.

“Sellers are obviously wanting to take advantage of the prices and I think that’s been opening up a little bit,” Case says. “But there’s certainly sellers that are probably holding off.”

Older sellers in particular, worried about people coming through their homes, might be inclined to wait. But Teelin says that once real estate agents were able to interact with clients in person again, they began following government health protocols to keep buyers and sellers safe. For example, buyers are screened with a health questionnaire before they can see houses.

Although the area’s real estate market likely won’t cool until more sellers list their homes, it remains an open question how much longer the forces from the pandemic will continue driving the market.

“I’m seeing my agents being very busy,” Teelin says, adding that with so many unknowns it is difficult to guess if the market will begin to even out in the fall. “It’ll be interesting to see how the next month unfolds.”

“Now that we’ve opened back up and we’re coming back into the marketplace we’re seeing an increase in activity.We’re moving along and it’s keeping everyone really busy right now.”

Chris Teelin, president of the Greater Syracuse Association of Realtors

In Central New York, the real estate market typically begins to slow with the onset of fall in October and November. The winter months of December, January and February are the slowest.

“I think there is so much pent up demand, I don’t see it slowing down,” Case says. “I think it’s going to stay pretty strong through the fall.”

Whether or not the market falls into a traditional cycle later in the year, the pandemic appears unlikely to shutter the market again. A good example is John and Monica Weber. Although the closing on their Hiller Heights property was delayed a few weeks, they pushed ahead with finding a new house in Florida.

They planned to close on their new home at the end of July and expressed no regrets about going through with listing their house.

“We wanted to head to Florida,” Monica says. “We got what we wanted and we were absolutely delighted. We lucked out for sure.”