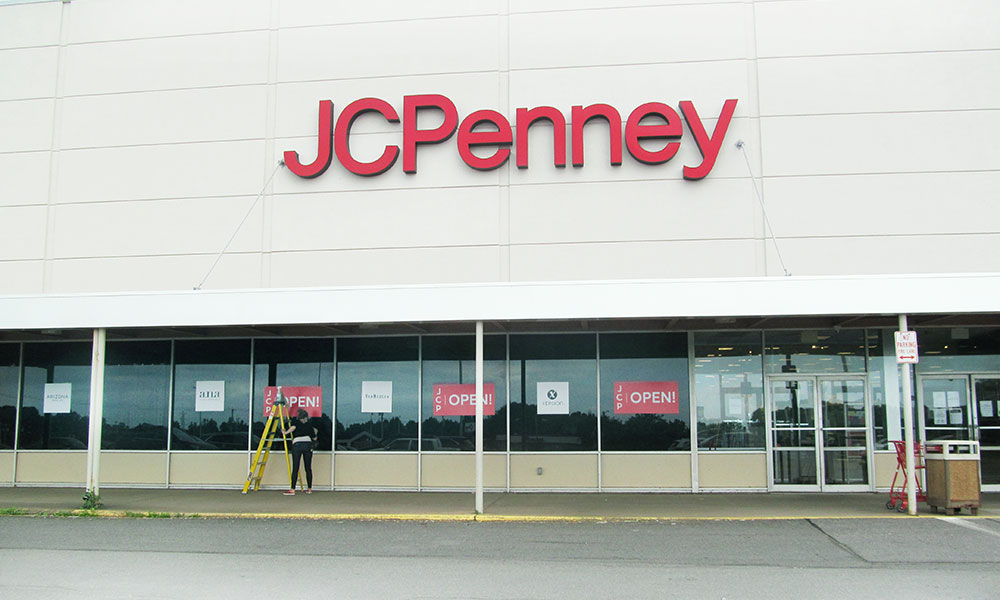 JC Penney’s Oswego location, which has been in operation since 1977, was spared from being shutdown in a recent round of store closures

Picture yourself as a department store manager who must temporarily shut down your store, send your workers home and be locked down while furloughed at home for several months in the face of a deadly global pandemic.

Then picture yourself as that same manager getting the news that due to corporate bankruptcy, your store is going to be permanently shuttered.

Carol Peters, general manager of the JC Penney  store in the Oswego Plaza in the Port City, knows this scenario all too well because she experienced it herself.

Fortunately for Peters, her staff and the community, the corporate powers that be decided to save the Oswego location.

The department store chain will close permanently about 154 of its 850 stores, including the massive store at Destiny USA mall in Syracuse, after entering into Chapter 11 bankruptcy in May and beginning the process of restructuring.

The 118-year-old chain based in Plano, Texas, was struggling before the business shutdowns associated with the pandemic. The company has about $4 billion in debt and has been edged out of the marketplace by e-commerce companies and discount brick-and-mortar stores, according to Reuters.

Peters is in her fourth year of managing the store, and also survived a scare three years ago when JC Penney started the process of closing about 180 locations. It was part of the debt-ridden company’s plan to right size its store fleet as more sales moved online.

Since that time, Peters said the Oswego store has performed well and up to standard.

“We’ve been meeting all of our metrics,” Peters said.

Early in the year, the company was heading in the right direction and hitting goals, Peters said.

“If the pandemic didn’t hit, the company would not be in Chapter 11,” she said.

Due to the onset of COVID-19, the store closed on March 18 and staff began to be furloughed. After two weeks, Peters herself was sent home.

After retail stores were allowed to open on May 18, JC Penney was mandated to follow certain guidelines. Extensive cleaning and sanitizing, social distancing and mask wearing is mandated, while the JCPenney beauty salon requires temperature taking while customers seeking other than top-of-head services must undergo regular screening for COVID-19.

Peters found out the news a day prior to when the company officially released the stores it wanted to close on June 4.

The Port City location was on that initial list.

“It was devastating and heartbreaking,” she said.

When made aware that the Oswego store was on the chopping block, Peters said she was not privy to any particulars.

“My thoughts were with the staff, because I know that I will always be OK,” Peters said.

Tynan’s mother worked at the Oswego store for 20-plus years, while his grandmother also worked there as well.

Staff numbers vary from 30 to 40 workers at the Oswego location.

“This is not just the store and staff, but a lot of the community have families that work here. You get to know everybody in this town,” Peters said.

The store was first established in Oswego in 1977.

“Although this is a corporate store, it’s really a community store,” she noted.

When the announcement came that the store would be closing, there was an outpouring of sentiment from the community.

“You really got to see that when you saw all the posts on Facebook and the memories people shared,” she said.

Peters theorized that part of the reason why the Oswego location became a “saved store” was because members of the community called JC Penney’s corporate office to express their dismay.

“One of the questions callers were asked was, ‘How far are you from the next JC Penney’s store?” Peters said.

She said when corporate discovered that people in the Oswego area had to drive to Watertown, Rochester or Cortland to shop at a JC Penney’s store, “they realized they were going to lose a lot of customers in this location.”

Peters said it was like a roller coaster ride for the days that followed, as staff waited for legalities to be ironed out concerning the decision to close the stores.

“We were coming in, taking things down and getting rid of things,” she said. “And then we were told to halt.”

The store actually held a liquidation sale with staff believing it was going to close despite the announcement not being finalized.

When the store opened for its liquidation sale, “the lines were incredible,” Peters said.

“I realized that people were excited to get to the liquidation sale, but there were so many that just couldn’t wait to get out and interact socially and just get out of their houses,” she said.

About two weeks after the initial announcement, Peters found out through an email that the Oswego site would be a saved store. She brought her team together for what would be an emotional celebration.

While she wasn’t given specific reasons as to why the store was saved, she speculated that it was because the landlord made it more cost-effective for JC Penney to stay and calls from the community to corporate paid off.

“I did a lot of crying over the past few weeks when I heard some of the stuff the community was doing,” she said. “It was tough not being able to hug someone or be able to high-five.”

“I am astounded at how many people with underlying conditions are out. People that fall into that high-risk area are out and about, wearing masks and being careful,” she said.

Meanwhile, she is seeing many younger people not donning masks.

“That’s a little scary, but people are really good about it for the most part,” she added.

She said one of the challenges is running the store without access to fitting rooms.

“Everybody wants to come in and try things on, but our fitting rooms are closed due to the pandemic,” she said.