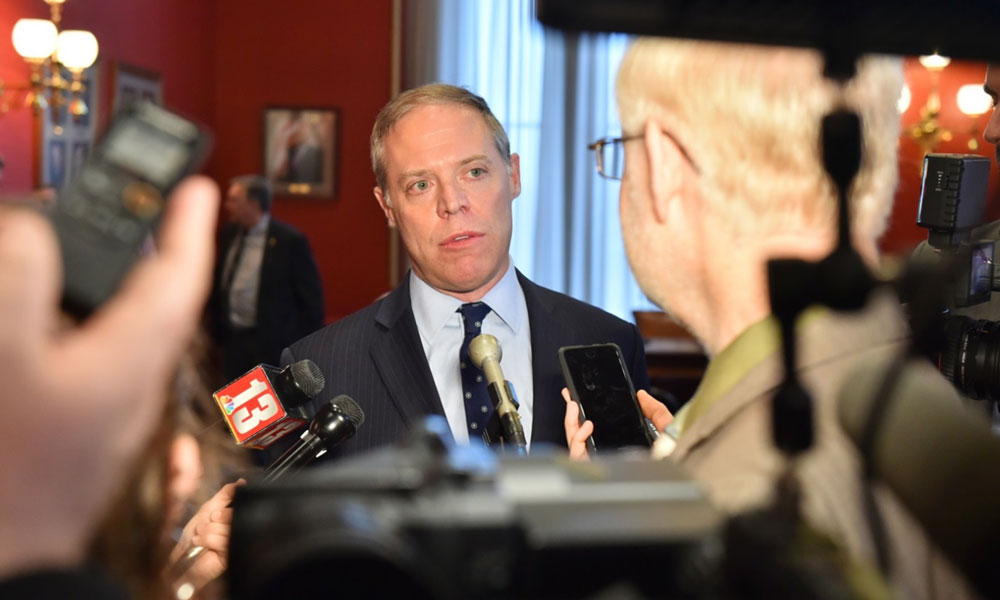 New York Assembly Republicans recently elected Will Barclay of Pulaski to serve as the party’s leader. This makes Barclay the first Central New Yorker in at least 115 years to serve as Assembly minority leader.

Q.: How did your experience as the Assembly Minority Conference’s ranking minority member on the Assembly Ways and Means Committee help prepare you for your current role as leader of the Assembly GOP? Does it give you an advantage when reviewing, analyzing and debating the state budget?

A.: I’ve been in the Assembly and in leadership for quite some time, and as a result I’ve slowly moved up the ladder. A ranker on the Ways and Means Committee can rightfully be classified as the second or third spot behind leader of the conference. That allowed me a bigger platform when I was ranker and I had more of a public face. As ranker, I attended all the budget hearings and then spoke for the conference when it came to budgetary matters. That higher profile position gave me the experience for this even higher profile role.

You would think as a rank-and-file legislator, you’re certainly engaged in the budget and have more of a macro picture of it. But the budget we have in New York state is massive.

We have analysts in each conference that carefully examine the budget because it is so complex. I went through the process when I was ranker on the Ways and Means Committee, so I have an idea of what it entails. But until you are actually engaged in it and doing it, you don’t realize how substantial and complex it is.

Q.: Generally speaking, what do you see as the most effective method to close the state’s $6.1 billion budget gap?

A.: It’s probably one of the most pressing issues we are facing in this state. It’s unfortunate that we are facing this budget shortfall in light of the fact the nation’s economy seems to be doing fairly well. Jobs are being created and wages are rising across the nation.

Normally that means more revenue for government coffers, but unfortunately that is just not the case in New York. There has been a bit of mismanagement on the part of Gov. Andrew Cuomo and majorities in the legislature and spending on Medicaid is really out of control. Our conference has some ideas on how to do it, but the governor just recently put out his budget proposal. I feel the governor and Democratic majorities are the ones who got us into this mess, and I would like to see what they propose before I show my hand in terms of how to do it.

That being said, one thing I will speak publicly about on behalf of our conference is we feel that raising taxes is not the proper way of getting us out of this fiscal mess. The state leads the nation in three of our biggest taxes: property, sales and income taxes.

We can’t just keep coming back to our citizens and demanding more and more out of them to try to balance this budget. If we do that, we will continue to witness this mass exodus as people leave the state. Obviously, the more people leave, there are less people paying taxes and it’s harder to balance the budget.

Medicaid is where the money is being spent and from a forecasting standpoint, it’s way overbudget. That is where the solution has to come from.

Q.: Is it fair to say that given this is an election year, spending will be kept down and legislators will refrain from any broad-based tax increases in 2020?

A.: I don’t think I’ve ever seen spending really kept down. The concern I have is that sometimes budget gimmicks are used, and that’s what is happening with Medicaid. We just push off some liabilities with Medicaid and roll the deficit over into the following year. We are certainly not for kicking the can down the road. I think this has to be addressed and there are going to be hard decisions that have to be made.

I’m not really in the business of complimenting the governor all the time, but he has to some extent kept state-funded spending, excluding federal appropriations that come into the state, under 2%. That is a sustainable level that we can afford in New York state. Unfortunately, the longer he has been governor, there’s been more gimmicks and loopholes that indicate he’s not totally committed to that 2% cap.

Q.: What are some of the more significant holdover issues from 2019 that will draw the Assembly’s attention as 2020 unfolds?

A.: Clearly the No. 1 issue is bail reform that was passed in last year’s budget. We are hearing overwhelming backlash from district attorneys, law enforcement and victims. We held a press conference recently to hear victims’ stories, and it was really heartbreaking.

We were told bail reform is a way to provide more equity in the system, and that the system was rigged against the poor. Maybe there are some arguments that can be made and certainly reform could have been made to the bail system, but this extends well beyond nonviolent alleged criminals.

Violent repeat offenders are being released, and that is a real public safety issue. Not a day goes by when you don’t see or hear of someone else being released from jail.

Sometimes as a legislator, we deal in theoretical ideas and don’t always see the impact of our policies. The bail reform measure is more than theoretical; it’s a real public safety concern. Our conference position is to repeal those so-called reforms and go back to the drawing board. We’d be willing partners with our downstate Democratic colleagues to make reforms to address inequity, but we’re not going to throw the whole thing out right now. By doing that, we are creating a real public safety issue.

The public outcry and amount of media attention this so-called reform is causing is creating tremendous pressure to change the law.

We have a very strong executive branch of government in New York state, and the governor has to be engaged. He has said he is open to reexamining this. From our conference’s perspective, we have to do it sooner than later. We don’t want to just wait and see, which is being said by some of the leadership in the other house. I think it ought to be repealed immediately, and that is what we will continue to hammer on.

Q.: Besides bail reform, what are some of the other more significant issues confronting the state?

A.: Another thing that is really devastating, particularly in Upstate New York, is the exodus of people out of New York state. We lost 77,000 people over the past year. This is really having dire consequences for our state and the sustainability of the system we have in place. It’s in jeopardy as a result of people leaving.

What we have always believed and fought for is to make the state more business and population friendly. You can’t expect to tax people to death when there are other opportunities in other states, and don’t think people are not going to look that way. The governor said last year that, “It’s the weather.” I’m not denying weather might play a role in it, but it’s a lot easier to make a decision to move out to a warmer state if you can save $10,000 to $20,000 in taxes and get a good job.

There are a lot of things we can do to help that situation, but it will take time to unravel. That is what we are fighting for, and unfortunately it involves a difference in perspective between New York City Democratic colleagues and Upstate. We have to keep our voices heard and be very loud.

We live in such a great state that is one of the most diverse states geographically. Right here in Oswego County, we have Lake Ontario, and just to the east are the Tug Hill and Adirondacks. You go south, and there are the beautiful Finger Lakes.

What other state can provide the geographic diversity — along with the world capital that is New York City — that our state has?

It’s such a tragedy in my mind that we aren’t the Empire State we once were.

Q.: What do you believe will be the keys to working together with Democrats in order to improve Upstate New York’s economy and the constituents of your district?

A.: It’s always a challenge. We come from really very different positions as far as perspective. However, in our house, I have a good relationship with the Assembly Speaker Carl Heastie, and I’ve known him throughout my political career and consider him a friend. I told him when I became minority leader that I promise to always act in a professional manner and try not to make things personal. That’s what I am going to try to do, but at the same time, I’m certainly not going to be a shrinking violet when it comes to calling out different policies that we disagree with or think are bad for the state.

He told me he understood, and I think we can have a decent working relationship.

One thing that members of the Republican Conference have done that I believe is valuable is invite downstate members to visit and see the issues facing Upstate. Last year, I went down to the Bronx to do the same thing. My feeling is most downstate representatives are trying to do the right thing by their constituents. We can show them some of the problems we have with policies and how they impact our constituents, and we would be happy to do the same. It’s about relationship building, understanding, acting professionally and not making things personal. That’s what I am going to try to accomplish.

It’s just like in business or anything else: You make friendships that way, and it’s a lot easier to find common ground when you are not yelling at one another.