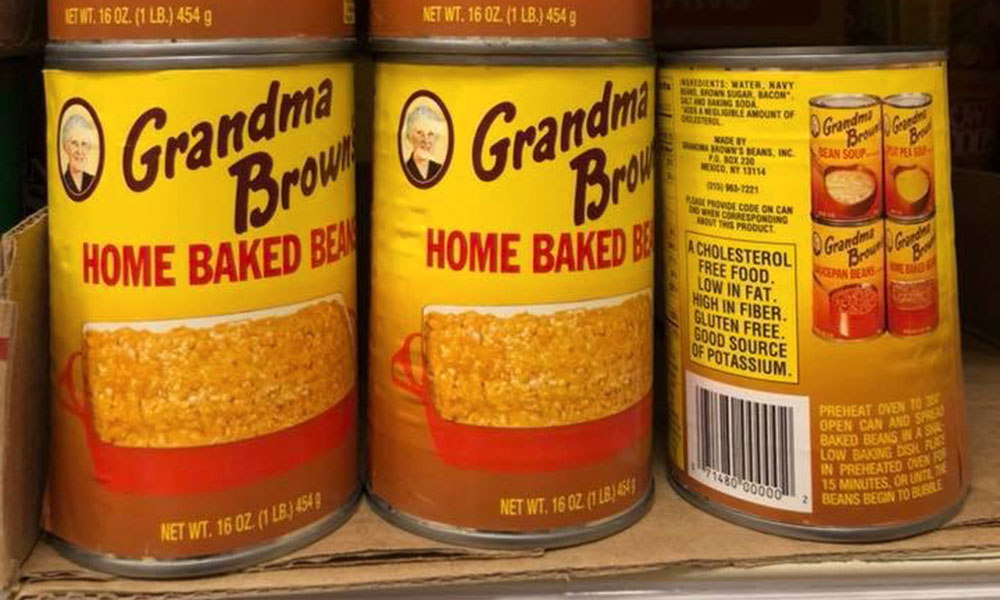 The flagship product of a small, family-owned company in Mexico disappeared from store shelves for several months earlier this year.

The company ceased production of the beans beloved by generations of Central New Yorkers this summer and resumed production before Thanksgiving, according to company owner and president Sandra Brown.

The beans, as well as Grandma Brown’s bean soup and split pea soup, are slowly making their way back to stores and online retailers. (They are currently out of stock on Amazon.com and Walmart.com).

Brown said the company recently filled orders for Tops Friendly Market and Price Chopper Supermarkets and that consumers should check local stores for availability. “What I’m telling people they should do is go to the store as early in the morning as possible after shelves have been re-stocked at night,’’ she added.

Central Square resident Vickie D’Agostino noticed in September that her favorite brand of beans was missing in action. She grew concerned that, for the first time in memory, her family’s Thanksgiving dinner wouldn’t include Grandma Brown’s beans. But luck was with her and she found a couple cans at a Price Chopper store.

“Every store I go in I always look for them,’’ said D’Agostino, 55. “I hadn’t seen any in a very long time and Price Chopper was the first place I saw them. They were literally on the bottom shelf, way in the back. If I didn’t take the time to really look, I wouldn’t have seen them.’’

D’Agostino, who grew up in Central New York and has lived here all of her life, said family birthdays, reunions, cookouts and other get-togethers are not complete without Grandma Brown’s beans on the table. She “doctors’’ them up a bit, adding brown sugar, bacon grease and a bit of crumbled bacon on top, before baking the beans until hot and bubbling. “I would even take leftovers and make a sandwich for lunch with cold beans and mayonnaise,’’ D’Agostino said. “There’s nothing else comparable to them.’’

The local devotion to Grandma Brown’s goes back to 1937, during the Great Depression, when Mexico resident Lulu Brown began making large pans of her family’s favorite baked beans and selling them in local grocery stores.

The beans proved popular: Lulu’s husband, Earl, son, Robert E. Brown, and partner, Richard Whitney, soon expanded their sales and marketing efforts to Oswego. Eventually they would deliver pans of beans to stores within a 70-mile radius of Mexico.

Business continued to grow, enough to require a bean processing and canning plant. If you’ve been to Mexico, you’ve probably seen the Grandma Brown’s facility on Scenic Avenue — and smelled the beans being processed. The company remains in the family and has 14 employees. (Sandra Brown is the granddaughter of Lulu Brown.

Fun fact: Grandma Brown’s had a concession stand in the shape of a can of beans at the 1950 New York State Fair in Syracuse and sold baked bean sandwiches for a nickel each. They were enjoyed by more than 70,000 fairgoers.

Thomas Connors, owner of Syracuse Crate, considers himself fortunate at this time (early December) to have Grandma Brown’s Home Baked Beans in stock and available for orders.

It’s a busy time of year, and Syracuse Crate spotlights a range of locally produced food products to “bring a bit of Syracuse to your door.’’ Two of the company’s best sellers, the Bit of ‘Cuse Crate and the Courtside Crate, contain a 16-ounce can of Grandma Brown’s Beans, packed alongside Hofmann German-style mustard, Salamida’s NY State Fair Spiedie Sauce, Buck’s All-Purpose Seasoning and other made-in-Central New York food items. The beans are also a popular add-on item for Syracuse Crate’s “Build a Crate’’ option, in which customers can customize crates as they like.

In October, Connors said, he received a deluge of emails and phone calls from people inquiring about the whereabouts of Grandma Brown’s Beans. He sometimes drives to Mexico to pick up cases of the beans himself and said several weeks ago that he had the beans back in stock — and expected to go through them quickly during the holiday season.

Connors has shipped Grandma Brown’s Beans as far as Australia and says a couple dedicated fans sometimes drive to Syracuse from Rochester and Pennsylvania to pick up cases of beans rather than have them shipped. He said he is confident the Grandma Brown’s supply chain will get back to normal soon.

“I think they’re kind of going in rotation,’’ Connors said of the company. “They might do beans one week and their soups another week. I think this allowed them to really see how fanatical people are about their product.’’