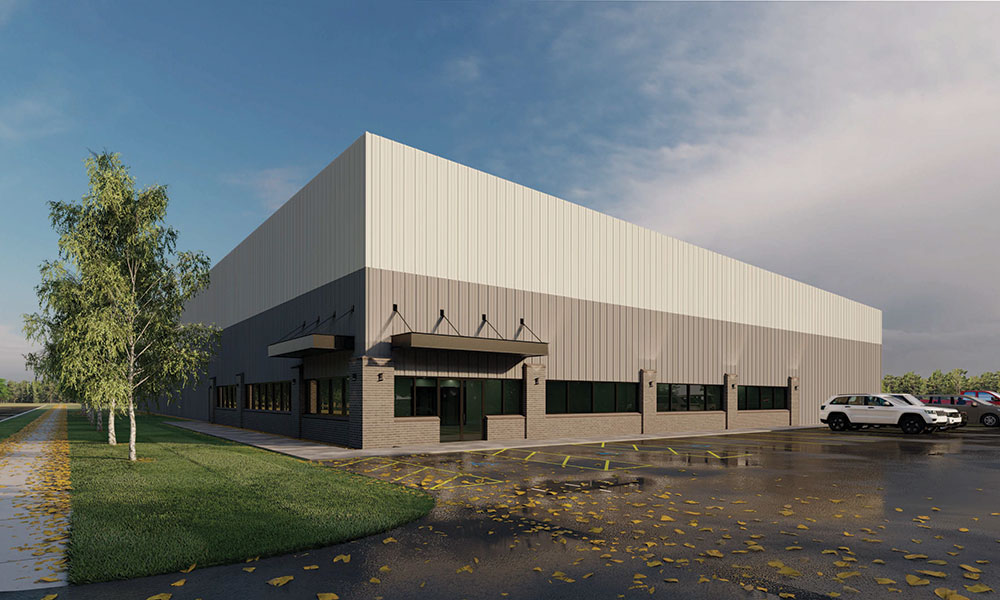 ‘In addition to marketing properties, OOC owns and manages several properties in an effort to promote business growth and development in the County of Oswego.’

Below are examples of how the IDA, Operation Oswego County (OOC), the County of Oswego and their other partners are satisfying these objectives.

With the recent announcement of the Fulton Downtown Revitalization Initiative project funding awards, the County of Oswego Industrial Development Agency is one step closer to implementing the development of a manufacturing startup facility on the site of the former Nestle complex in Fulton. The $4.3 million project will include the development of a 30,000-square-foot, modern, flexible industrial space on a 3-acre parcel, as well as bringing a new Sixth Street extension and utilities into the Nestle site. The project has funding commitments from the County of Oswego IDA, New York State Empire State Development and the City of Fulton Downtown Revitalization Initiative.

The building and site have been designed to be flexible enough to support multiple industrial tenants that could include manufacturing, research and development, and service businesses. The project received approval from the city of Fulton to acquire 3 acres of the former Nestle site and the IDA has purchased the site. Site plan approval from the city of Fulton planning board is already in place. The project is designed to honor the city of Fulton and the Nestle site’s history of manufacturing, while also looking to the future to provide modern flexible space and infrastructure for today’s business needs.

In 2020, ground was broken on a sewer service extension to the Oswego County Airport and the adjacent Airport Industrial Park, at the corner of county Route 176 and Howard Road in the town of Volney. The $2.5 million project has been in planning for almost 10 years. However, lack of funding kept the project from being started until last year. The project is a collaboration between Oswego County, the town of Volney, the city of Fulton and the Oswego County Industrial Development Agency.

The sewer extension, once completed, will provide the existing businesses and residences access to sewer services, as well as provide a new marketable asset to attract new businesses to the 140-acre Airport Industrial Park owned by OOC.

The lack of public sewer has always been a limiting factor that’s held back investment at the airport and the adjacent industrial park. Once complete, this project will encourage new business attraction and existing business expansion in the surrounding area. Homeowners will also have the opportunity to hook up to this new, more efficient system for an additional cost. This could potentially reduce the number of septic systems in an area known for poor drainage which, in turn, could also help improve water quality in the area.

As the sewer extension project is completed, the next step will be to apply for funds to bring utilities and roads into the industrial park property, which already had initial conceptual plans completed. The Airport Industrial Park property is being marketed to companies that would have a competitive advantage by being located next to a regional airport, as well as to other businesses that fit into the surrounding area.

Funding for the $2.5 million project came from the Northern Border Regional Commission and the New York State Environmental Facilities Corporation, as well as the New York State Department of Environmental Conservation, thanks to NYS Sen. Patty Ritchie (48th District). The IDA is also contributing $250,000 to support this infrastructure initiative.

The County of Oswego Industrial Development Agency made the decision to purchase approximately 200 acres of industrial-zoned property adjacent to the existing Oswego County Industrial Park owned by OOC. It has been selected as a location for many industrial businesses since its original development in the 1980s.

Its easy highway access, modern utilities and proximity to the Syracuse market for supply chain and talent make it a superior choice for businesses looking at Oswego County and the Central New York region.

Most recently, EJ USA chose to build a 71,300 square foot facility on a 15-acre parcel in the Oswego County Industrial Park to manufacture products for infrastructure development and to serve as the company’s distribution and logistics hub for the northeast. They now employ over 100 employees at the park. While the decision was great for Oswego County and the business, it did highlight a growing issue at the park — a shrinking availability of quality land for additional projects.

There are still parcels available in the park for smaller developments. However, there are very limited options for larger developments that would need 20 acres or more. The decision was made to pursue additional land to more than double the size of the park and have the flexibility to accommodate both large and small development projects. It was also determined that, while the utilities at the park were adequate for the existing businesses, there would need to be additional capacity to allow for more development.

The IDA hired C&S Companies to study the existing utility infrastructure in the park and determine, based on the new land acquisition and the types of industry most likely to build there, what the additional utility needs were.

C&S Companies also developed conceptual site plans, utility plans and project budgets for bringing roads and utilities onto the acquired property. These studies will also be used to apply for federal and state grant programs, over the next several years, to fully build out the industrial park expansion.

The IDA is also partnering with the County of Oswego, village of Phoenix, and the town of Schroeppel, where the industrial park is located, to develop inter-municipal agreements for utility services and to make a collaborative effort to fund the improvements needed for new development. Most notably, wastewater treatment capacity was identified as a critical need at the village of Phoenix wastewater treatment facility.  Based on the analysis from C&S and input from our partners, it was quickly determined that collaborating to improve the wastewater system would benefit not only the industrial park but also the village of Phoenix and town of Schroeppel for their future development needs.

C&S Companies has developed plans that will improve the current issues at the 600,000 gallons-per-day wastewater treatment facility, as well as options to increase capacity up to 1 million gallons per day, if approved. The increase in capacity will allow economic development professionals to market the industrial park expansion as an ideal location for new business development without the limitations that currently exist.