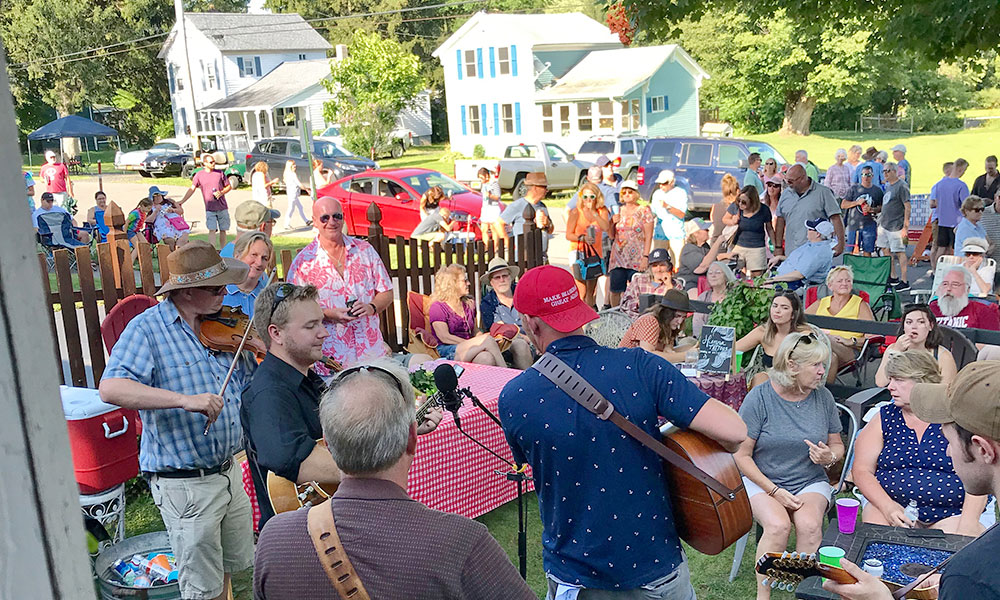 ‘Fair Haven is a village that likes to live, love and laugh. Visit a couple times, and you’re no longer a stranger.’ Pictured is last summer’s Porchfest, one of the new events held at the village.

‘Fair Haven is a town with no chain stores, no large employers. Its downtown looks quaint, and on first glimpse, its businesses might even seem somewhat quirky. In this modern world, this kind of authenticity and family feeling are most welcome.’

It’s New Year’s Eve 2018, and the Hardware Store Cafe and General Store in Fair Haven is packed with diners around lunch. It’s not only an occasion bridging two pivotal years for the beautiful village, but a scene that was unimaginable even a few years ago.

For much of its existence, Fair Haven has been known as a lakeside resort community with busy summers that — to outsiders at least — hibernated in the winter. It’s been in the news for other reasons lately, but the success of its business community has been a very underreported story.

The latest census counts Fair Haven’s citizenry at 727 souls, although the lakeside community swells in the summer as snowbirds and people in other communities come back north to both modest cottages and homes resembling mansions along the West Bay.

When we would spend summers growing up at our camp a few miles down Lake Ontario or working as a family at the Sterling Renaissance Festival, this is often where we’d come for groceries and modest entertainment. Back then the Fair Haven Register newspaper and my future employer, the Oswego Palladium-Times, would run stories about the small town’s aspirations to become a year-round tourist destination. Those dreams, like the Register itself, appeared to go defunct, but nobody seems to mind that much. Fair Haven’s a gem they are not necessarily in a hurry to share.

If you came here outside the peak months a few years ago, you wouldn’t be able to eat in the cafe or do almost anything else in the village’s downtown. For a long time, the grocery store now known as Bayside was the only thing you would find open. Plenty of parking spaces would be available, but little else.

On a late December day when I enjoy a plainly titled yet delicious Meat Sandwich at the Hardware Store Cafe and General Store, this diner/seller of curios abounds with warmth and community. People come in and hug their neighbors or long-lost friends. A woman brought in cookies for the owners. And nobody’s really in any hurry and never is heard a discouraging word. The business has been many things over the years (including, obviously, a hardware store) but perhaps its most important role has been a modest driver of change.

A couple of years ago, the then-newish owners of the cafe/store, Susan and Larry, decided to stay open year-round. It seems like a small move, but it’s the kind of decision that can have a positive chain reaction when many other businesses don’t necessarily have the resources or willingness to try to become 12-month operations.

And a funny thing happened — people kept coming. They aren’t all Fair Haven residents, but also those of the surrounding villages, Oswego and elsewhere who saw social media posts from friends and families and decided it was worth the drive. The advent of social media offering glimpses into these places help draw people, and the experiences keep them coming back.

But 2019 saw new ownership for a number of businesses. Sterling Cidery, which has become an anchor for the community as a purveyor of delicious hard ciders and a convivial atmosphere, changed hands from founders Amy and Bobby Malo to a pair of local couples, Brandon Furber and Jana House and Craig Arnold and Lesley Gould. The two close-knit couples (House and Gould are sisters) already contributed to the village in a big way by launching Porchfest and its dozens of performers a few years ago.

The Pleasant Beach Hotel, a lakeside destination for decades, changed owners as well. As did Giusseppi’s Pizza and Subs, an anchor at the eastern edge of downtown. The turnover of these businesses did not slow down the town’s momentum — indeed, they seemed to keep the energy as fresh as the food.

And this village served up plenty of food, drink and adventures for residents and visitors alike in 2018. Pirate Fest, Winter Fest and Porchfest, all fairly recent additions to the schedule, put on very distinctive offerings for all ages. The biggest celebration of the year remains its Independence Day celebration, and with its Mile-Long Parade, jam-packed carnival and well-attended fireworks, among other attractions.

If you were to look north from the cafe, your gaze would take you to Brandon’s Pub + Grille, known as O’Connor’s until fairly recently, presenting food, beverages and a lot of music. Just west along the main drag of Route 104A is Bayside Grocery, still the go-to for most basic foodstuffs and necessities. Bayside shares a parking lot with Big Bo’s ice cream, which packs in customers throughout summer. Across from the cafe you’ll find a gift shop and home base for Kyle Meddaugh, better known as the proprietor of OnePhoto, which unofficially serves as a big visual booster for #DestinationFairHaven.

The west side of the bay contains such attractions as Colloca’s Winery, which serves up its own vintage as well as a variety of food and entertainment, and Turtle Cove Marina and Restaurant, which has survived plenty of flooding to provide its fare and a variety of crowd-pleasing music.

Fair Haven is no longer just a summer town. The likes of Brandon’s, Colloca’s and Turtle Cove have started making a go of it year-round recently, with the cidery planning to only shut down a short time for renovations before rejoining the offerings.

The village also thrives on its artistic and creative scenes. A few art galleries, a place for music lessons, a local ukulele band and writers’ group provide outlets for all manners of creative sorts. Open jams and open mics at Sterling Cidery and Turtle Cove accommodate players of many skill levels and genres.

Fair Haven is a town with no chain stores, no large employers except perhaps the seasonal state park and its beaches. Its downtown looks quaint, and on first glimpse, its businesses might even seem somewhat quirky. In this modern world, this kind of authenticity and family feeling are most welcome.

If you’ve seen Fair Haven in the news, chances are it wasn’t for any of these positive business developments but instead about flooding. The high water and concerns returned in 2019, the second time in three years that rising tides brought growing concerns about how this could impact tourism, a big part of local business.

The local news crews showed up, interviewed local businesses and residents and tried to get somebody to complain about the government. The reporters did their standups where they looked really concerned. Then they packed up and left, not particularly interested in returning to see how Fair Haven really is. If you only watched TV news and never visited Fair Haven, you’d think it is just a town that gets flooded and people are always struggling. This is far from the truth.

And that is changing. Recently, Gov. Andrew Cuomo announced $43 million in funding to support a number of projects in Cayuga and Oswego counties to both mitigate flooding and promote economic development. Those projects for the immediate Fair Haven area total more than $8.4 million, including $2.7 million for a West Bay Road storm sewer system, $1.5 million for the Phillips Park Walkway, $1.2 million for Fair Haven Beach State Park, $900,000 for the Nine Mile Creek Bike Corridor, $800,000 for King Street boat launch and parking, $600,000 for West Barrier Bar Park, and $250,000 each for Standbrook Park, Cottage Street Park and the Lake Street Pump House.

How much of, and how soon, any of these will happen remain open questions, as does whether another flooding awaits the region in 2020. But these represent progress nonetheless, as well as an unusual occurrence of the wider world taking a proactive interest in Fair Haven’s affairs.

Whatever these projects bring, the community will persevere. Maybe it never will become the year-round tourism destination some have wanted. And maybe that doesn’t matter too much. Fair Haven is a village that likes to live, love and laugh. Visit a couple times, and you’re no longer a stranger. Hang out in one of the local establishments for a bit, and you’ll probably make new friends.