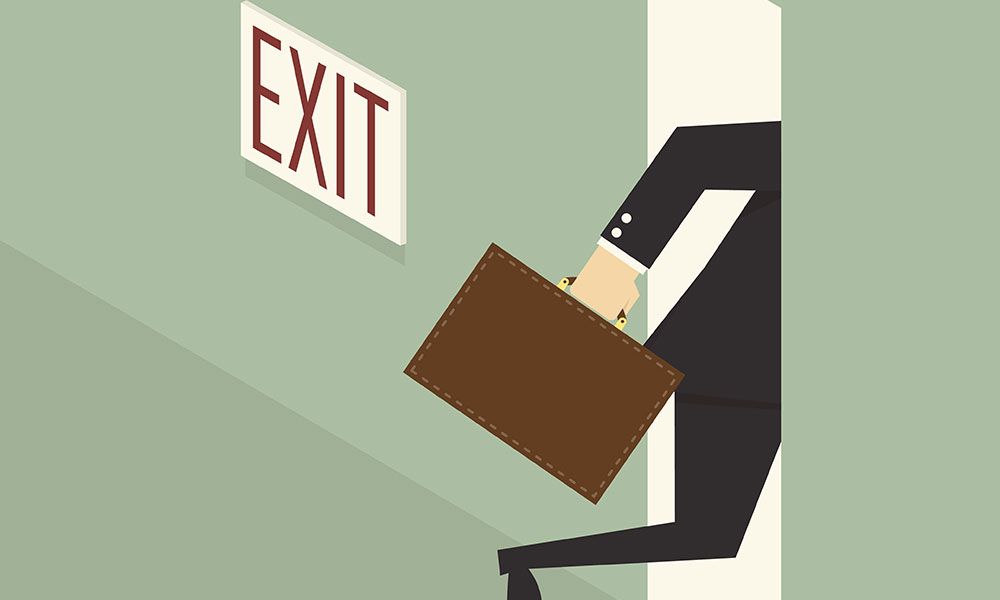 ‘Years ago, I advanced ‘Frassinelli’s theory of going out while you are at the top of your game.’ It is at once simple and very complicated.’

Our society admires and cheers success, so in business and industry the quest to succeed can lead to issues that can have profound consequences on a person’s mental and physical well-being.

We have heard about burnout of those who can’t handle the relentless strains and stresses of high-powered jobs where the emphasis is on up or out. In other words, you either keep moving up the ladder or you’re likely to be shown the door.

We are in awe of the legends of the corporate world — the Bill Gateses and Jeff Bezoses. Their Horatio Alger stories of rising from humble beginnings to become among the most successful and wealthiest people on the planet are templates for the “how to succeed in business” manuals.

In the world of entertainment, Oprah Winfrey left her hit daily show while she was at the top of her game and transitioned beautifully to the next phase of her life. She didn’t wait around until the audience drifted away and her program was cancelled. A decade ago, she started her own network — OWN (Oprah Winfrey Network) — now jointly owned by Discovery Inc. and Harpo Studios with Winfrey as chief executive officer.

But for every Bill Gates and Oprah Winfrey, there are thousands of others — executives and personalities who fail to move on at the right time.

It is these who are the subject of this column — the person who has grabbed the brass ring but who overstays his or her welcome. The landscape is littered with these famous personalities, and they come in all walks of life, not only business and entertainment.

Among the high-profile corporate examples who were shown the door are Travis Kalanick of Uber, Andrew Mason of Groupon, Jerry Yang of Yahoo, David Neeleman of Jet Blue and Rob Kalin of Etsy.

One of the most recent high-profile cases in the world of sports involves Simone Biles, who went into the 2020 Olympics in Tokyo this summer as the undisputed best female gymnast on the planet.

“Maybe employers might zero in to find a deeper definition of excellence and courage, one that goes beyond solely performance and the bottom line.”

Among her competitors, several admitted outright that with Biles in the mix, their goal was to get a silver medal (second place), conceding the gold medal to her.

Something totally unexpected happened on her way to the winners’ podium, proving once again that nothing in life in certain except for death and taxes.

Biles imploded, faltering badly in an early all-around team event, then pulling herself out of competition for the remainder of that event and all of the other events in which she was scheduled to compete up until the final gymnastics event — the balance beam.

Biles made a remarkable comeback to capture a bronze medal (third place), the same finish she had in that event five years earlier in Rio.

Biles said she withdrew after she had no idea where she was in the air during a routine — an issue commonly known in gymnastics circles as “the twisties.”

Biles also admitted that her mental health had been affected by the unreasonable expectations placed upon her going into the games. “I do feel as if I have the weight of the world on my shoulders at times,” she told her Instagram followers in July. After competition ended, she also reported that a favorite aunt had died during the week she was to have competed.

Coming into the Tokyo games, Biles was the undisputed star attraction, with many believing that the results of her competitions were foregone conclusions.

Regardless of what happened in Tokyo, Biles will leave an incredible legacy. She has performed routines that have made us gasp, but there is now a small asterisk next to her name and the word “perfection.”  She is no longer seen as invincible. The mystique that embraced her is gone. She is now another mortal, just as we are, but now she is also revered in some regards as having conquered significant obstacles to compete and succeed.

Did she stick around too long? Years ago, I advanced “Frassinelli’s theory of going out while you are at the top of your game.” It is at once simple and very complicated.

I based it on my own decision to retire as publisher of The Palladium-Times at age 59 ½ when I had my most successful and productive years. The decision was whether I kept at it, trying to build on those successes and risk regression or outright failure and being replaced. Or, would I bask in the glow of knowing that my contributions were acknowledged, and my presence would be missed.

I had been in the newspaper business for 32 years, working my way up through the ranks, first as a reporter, then a bureau chief, regional editor, managing editor, editor, general manager and, finally, publisher. I loved my job and the newspaper’s role in helping to make the community better.

Each job level has its pitfalls and dangers, and, at each rung, the demands and the pressures become increasingly more daunting.

Here, though, is the best part: Going out on top equals permanent euphoria. I retired on my own terms. Nearly 22 years later, I have never regretted, not even for one minute, leaving when I did.

For all of these years and for those yet to come, I can enjoy the memories of my successes and accomplishments, the accolades from my coworkers and bosses and the beautiful written note of commendation from the corporate CEO thanking me for my service and the success of the newspaper and thank you notes from readers whom the newspaper helped.

I think about those who stayed around too long in business, sport and elsewhere. Their demise and the humiliation they suffered played out in a very public way, and they are left to replay these memories for the rest of their days.

Muhammad Ali, for example, one of the top fighters of all time, was just a shell of his glorious self, and we cried for him as lesser opponents pummeled him during his last several bouts following his return to the ring after his glory years.

Afflicted by Parkinson’s disease, likely caused by some of the beatings he absorbed during those ill-advised, latter-career bouts, he was robbed from enjoying the “golden years” he so richly deserved.

Football great Tom Brady, quarterback of the Tampa Bay Buccaneers, who won the Super Bowl last year, should have packed it in at the end of the season, but he has decided to play again this year. Why? With seven Super Bowl rings — the other six with the New England Patriots — a lock on induction into the Football Hall of Fame and a legacy of being one of the best quarterbacks in NFL history, what more does he have to prove? Nothing. What does he have to lose? Much, especially if he has a mediocre season or is injured.

At age 24, Simone Biles entered the 2020 Olympics with nothing to prove. She had done it all. In addition to being the reigning Olympic champion after her jaw-dropping performances at the 2016 summer games in Rio de Janeiro, she is the most decorated U.S. women’s gymnast ever with 32 World/Olympic medals.

That she suspended her participation in Tokyo when she did rather than risk permanent injury was a brave move, and we need to acknowledge how important that was even if it did taint the myth of her invincibility.

For leaders in the business community, there are lessons to be learned from the Simone Biles story, and they are brilliantly noted in Lindsay Kohler’s recent feature story in Forbes magazine.

• Even your star performers will wobble from time to time.

• Great expectations can lead to burnout.

• It takes courage to speak up when things aren’t right.

Maybe through the Biles experience, employers might zero in to find a deeper definition of excellence and courage, one that goes beyond solely performance and the bottom line.

Obviously, when it comes to deciding when to leave or retire, there are many practical and personal considerations. We also must determine what we want to achieve in our careers. Each of us must decide what going out on top looks like.

Should the Media Remain Neutral?