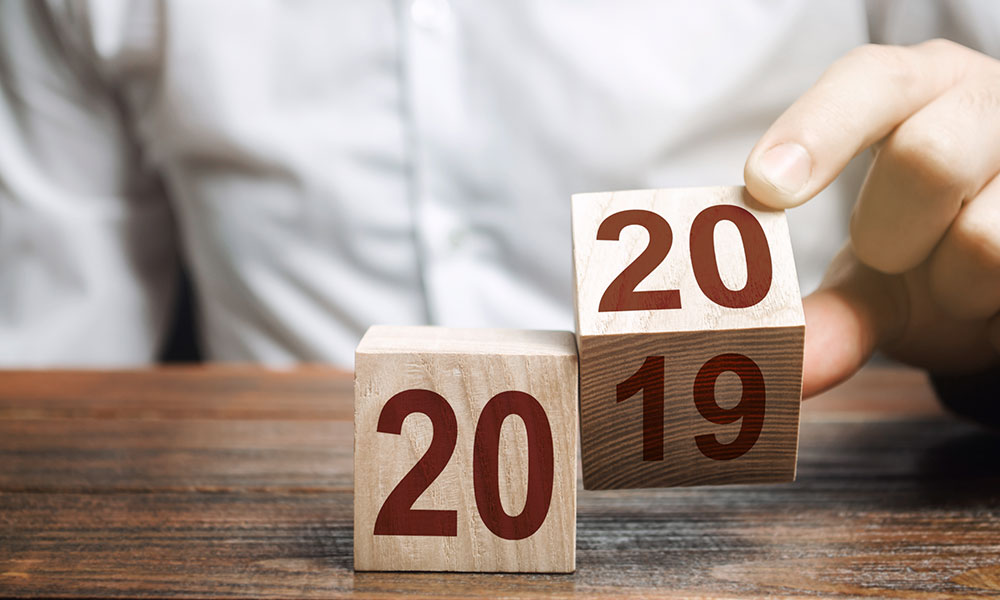 ‘The decade does not officially end until Dec. 31, 2020. So why am I doing this column a year earlier? Because, as most people did in 1999, they will be celebrating the end of the decade on the last day of December.’

Two decades into the 21st century seem like a lifetime.

Although we would like to have 20/20 vision to see what is going to happen as we stand on the threshold of 2020, no such luck. The best we can do is study the past to try to get a glimpse of the future.

While we hope for the best, we brace ourselves for the worst. This is the way of human nature. Wars, terrorism, climate change, our inhumanity to each other, the inability of our leaders to be civil to one another for the common good, computer threats, cyber-bullying — they have been our constant companions during the last 20 years, and, regrettably, they seem to be following us into the 2020s, possibly even beyond.

At the end of each year, the news media will gather the top stories from the concluding year as a way to summarize the important events that affected us and possibly touched our lives in a significant way. It’s a device to give context to the year, rather than looking at it in a vacuum.

Before we get into specifics, I want to make the same point that I did when the calendar clicked from Dec. 31, 1999 to Jan. 1, 2000. This was not the beginning of the 21st century, even though most people celebrated as if it were.

I, on the other hand, did my celebrating a year later — on Dec. 31, 2000 – because this is when the century officially ended.

A lot of my friends said I was nuts until I proved it to them. When we went from 1 BC to AD 1, we did not go through a year “zero.” So, the first 10 years in AD (Anno Domini — year of our Lord) were numbered 1 through 10. The decade ended on the last day of the 10th year.

If you extend this to present day, the decade does not officially end until Dec. 31, 2020. So why am I doing this column a year earlier? Because, as most people did in 1999, they will be celebrating the end of the decade on the last day of December.

Here is a list of the biggest stories that occurred in each year since the beginning of the 21st century:

• Sept. 11, 2001 – The World Trade Center and Pentagon were attacked by al-Qaida terrorists flying jets into these buildings in New York City and Washington. A fourth plane was downed in Western Pennsylvania. Nearly 3,000 people died in the attacks. Hundreds more died or are dying from the aftermath of toxic materials ingested into their bodies.

• In 2002, an attack in the tourist district of Kuta on the Indonesian island of Bali resulted in 202 deaths, including 88 Australians, 38 Indonesians, 23 Britons and people of more than 20 other nationalities.  More than 200 others were injured.

• In 2003, the United States invaded Iraq and toppled Saddam Hussein.

• In 2004, George W. Bush was re-elected president of the United States. Also, Facebook, a controversial force of social media, was formed by Mark Zuckerberg, the fourth richest person in the United States. Forbes magazine pegged his wealth in 2018 at $69.6 billion. To put such an enormous number into perspective, this is four times the combined per capita income of every man, woman and child in both Oswego and Onondaga counties.

• In 2005, Hurricane Katrina killed 1,836 persons in the Gulf of Mexico area, most notably in New Orleans.

• In 2006, Iraqi President Saddam Hussein was found in his hiding place after having fled for his life following the invasion of his country by allied forces led by the United States. He was convicted by an Iraqi court and hanged. Also, Twitter, another social media phenomenon and the one favored by President Donald Trump, was launched.

• In 2007, the meltdown triggered by the sub-prime housing and bank crises led to a global recession which nearly caused another Great Depression.

• In 2009, thanks to government intervention, the recession began to recede, and the stock market began its methodical run-up to record levels.

‘At the end of each year, the news media will gather the top stories from the concluding year as a way to summarize the important events that affected us and possibly touched our lives in a significant way. It’s a device to give context to the year.’

• In 2010, the greatest oil spill in recorded history — known as Deepwater Horizon and operated by BP Petroleum — occurred in the Gulf of Mexico following an explosion. This resulted in the discharge of 4.9 billion barrels of crude oil into the Gulf. Also, the Arab Spring movement, which led to the overthrow of leaders in Tunisia, Egypt and Libya, officially began.

• In 2011, the Syrian civil war began. Its consequences continue to be felt today in the changing geopolitical landscape of the Middle East.

• In 2012, Super Storm Sandy caused $70 billion in damage and devastated parts of New York City, including its famed subway system, and the New Jersey Shore. Also,  the surprise attack at the U.S. embassy in Benghazi, Libya, resulted in the death of Ambassador J. Christopher Stevens and embroiled then Secretary of State Hillary Clinton in the blame game. Also President Obama was re-elected.

• In 2013, Pope Benedict XVI resigned, and Pope Francis became leader of the Roman Catholic Church. Also, the Boston Marathon bombings occurred resulting in three deaths and the injuring of several hundred others.

• In 2014, the worst Ebola epidemic in recorded history occurred in West Africa, infecting nearly 30,000 with more than 11,000 deaths. Also, ISIS launched an offensive in northern Iraq to set up a caliphate. This led to intervention in Iraq and Syria by a U.S.-led coalition of armed forces.

• In 2015, 195 nations agreed to lower carbon emissions as their concern about global warming intensified. Also, coordinated terror attacks by suicide bombers at various locations in Paris resulted in 138 deaths (including the seven perpetrators) and 413 injuries.

• In 2016, Republican Donald Trump defied the polling experts and pulled an improbable upset over Democrat Hillary Clinton to become president of the United States. Also, reacting to the influx of immigrants into European countries, voters in the United Kingdom voted to leave the European Union, a movement that would forever become known as “Brexit.”

• In 2017, Hurricane Harvey killed 68 in Texas; Hurricane Irma killed 52 in Florida, and Hurricane Maria decimated Puerto Rico, killing 2,975. Also, a shooter opened fire at a country music festival in Las Vegas resulting in 58 deaths and 422 injuries. Also, in Charlottesville, Virginia, site of a protest against the removal of a Confederate statue, a white supremacist rammed his car into a crowd of counter-protesters, killing one and hurting 19 others. Also, the Mueller investigation into foreign interference with the 2016 U.S. presidential election began.

• In 2018, a gunman opened fire at Marjory Stoneman Douglas High School in Parkland, Florida, resulting in 17 being killed and another 17 injured. The shootings touched off a nationwide debate about gun control and led to massive demonstrations and protests all over the country. Also, Prince Harry and actress Meghan Markle were married as about 29 million viewers in the United States looked on.

• So far in 2019, the Mueller Report was presented with President Trump saying that it vindicated him while his opponents say just the opposite. Also, an inquiry began to determine whether articles of impeachment should be brought against President Trump for allegedly seeking help from a foreign leader (President Volodymyr Zelensky of Ukraine) to launch an investigation into a political rival (Joe Biden) and his son (Hunter). Conventional political wisdom indicates that the Democratic-controlled House of Representatives will vote for impeachment while the Republican-controlled Senate will vote to acquit the president. Also, Republicans and Democrats are preparing for a presidential election in 2020, with Trump running for re-election and more than 20 Democrats trying to win their party’s nomination to oppose him.