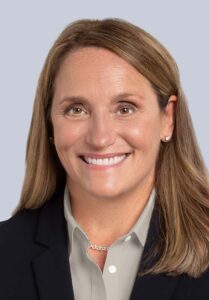 Pamela D. Caraccioli has been named president and chief executive officer of Fulton Savings Bank (FSB). She succeeds Michael J. Pollock, who retired at the end of 2021, following a 41-year career with the bank.

“Pam has served as a trustee of our bank since 2015, and while considering the leadership needed to move us forward, we focused on her deep connections to our region, and her outstanding record in cultivating relationships and collaborations with business, industry, government and nonprofit organizations throughout New York state,” said Brian Caswell, the bank’s board of trustees chairman. “She has a solid understanding of our customers, and our community, as well as our position in this market.”

Caraccioli most recently served as deputy to the president for external partnerships and economic development at SUNY Oswego and led several campus health and safety initiatives during the first 20 months of the pandemic. Prior to that, she served as a faculty member in SUNY Oswego’s School of Communication, Media, and the Arts. She also served as deputy director for Operation Oswego County, Inc.

Retiring President and CEO, Michael Pollock said, “Aside from her many qualifications, Pam knows the area, the people, and the business community. She was born and raised in Oswego and her family’s business, Davis Brothers, Inc., has served the local area for 60 years.”

Caraccioli holds a bachelor’s degree in Law and Society from the University of California at Santa Barbara, and a Master of Public Administration from Syracuse University’s Maxwell School of Citizenship and Public Affairs.

“Pam’s civic and community service is extensive,” Caswell said. In addition to serving as a trustee for Fulton Savings, she is a board member with the New York State Economic Development Council and serves on the Central New York Regional Planning Board. She chairs the advisory board for the Central New York Biotech Accelerator at Upstate Medical University and serves on the advisory boards for SUNY Oswego’s School of Business, Oswego Health Foundation’s Campaign Steering Committee, and the Garrett Dunsmoor Memorial Foundation.

“Having been asked to succeed Mike Pollock as the next president of Fulton Savings Bank is an incredible honor,” Caraccioli said. “Mike has created and led an exceptional team for decades and I’m thrilled to continue working closely with this team and our trustees to provide the very best service to our customers and move the bank forward for our community.”

She will be responsible for the OOC, Operation Oswego County Foundation, County of Oswego Industrial Development Agency and Oswego County Civic Facilities Corporation record keeping and reporting to state and federal agencies. She will also monitor financing portfolios and help coordinate required audits.

Perwitz joined OOC in 2007 as administrative secretary. Over the years, she has taken on many responsibilities beyond those required in her role.

“She knows our business well and is ready for the challenges of this new position.”

Perwitz received a bachelor’s degree from Mercyhurst University in Erie, Pennsylvania, near her home town. She moved to Oswego County after accepting her first professional job in the area.

Perwitz is a graduate of Leadership Oswego County and has served on several boards since. She is currently serving on the board of directors for Fulton Block Builders and the United Way of Oswego County. Perwitz is also a NYS licensed notary.

MACNY President & CEO Randy Wolken has recently been named to the list of City & State’s Economic Development Power 75. He was No. 28 on the list.

Nate Andrews, MACNY board of directors president, said, “On behalf of myself and the board, we congratulate Randy Wolken on this well-deserved recognition for his economic development efforts. As the leader of MACNY, he represents hundreds of companies that are dedicated to investing and growing production right here in Central New York. We will continue to work together, and with all our community partners, to help advance manufacturing, workforce development initiatives, and economic growth in CNY and beyond.”

MACNY is a nonprofit association representing more than 300 businesses and organizations across 26 counties in Central and Upstate New York.

About three-quarters of MACNY’s members are industrial companies that employ thousands of individuals and supply the region, nation, and world with a variety of products and services.

Wolken also serves as president of the Manufacturers Alliance of New York State, Inc., a statewide organization of manufacturing associations working together on behalf of more than 5,400 manufacturers and businesses on state and federal issues. In addition, Wolken co-chairs the Central New York Regional Economic Development Council. To view the City & State publication, please visit www.cityandstateny.com.

“Cindy is an experienced and strategic leader with a proven track record of building high-performing teams and delivering results,” said Jim Reed, CEO and president of Excellus BCBS. “She’s also tremendously generous with her time and service to our community.”

“Anyone who knows Cindy is also likely not surprised that she broke this barrier at our company, as our first-ever female chief information officer,” he added.

In her new position, Langston is responsible for delivering on a new technology foundation, developing market leading capabilities and readying the organization with the talent and technology needed for the future.

Langston has a B.S. degree in computer technology from Purdue University, an MBA from Lake Forest Graduate School of Management and over 30 years of experience in the field of information technology and consulting. She has worked for Dow Corning Corporation, Aon Hewitt, Health Care Service Corporation (HCSC), and Blue Cross Blue Shield of Michigan, in addition to her time as a consultant.

Langston’s leadership journey has taken her across the globe. She spent 10 years, for example, as an international consultant leading large, global IT implementations in Australia, Japan, England, Singapore, Scotland and South Korea.

In 2014, Langston started at Excellus BCBS as a vice president in information technology. Three years later, she was promoted to lead the analytics and data division as chief analytics data officer.

The C&S Companies was recently recognized with the American Council of Engineering Companies (ACEC) of New York’s Diversity, Equity, Inclusion and Belonging (DEI & B) Award.

The awards were given for the first time this year to good standing members of the organization that have launched a program or initiative to attract, hire and promote personal and professional growth opportunities for women, people of color, LGBTQ+ persons and other underrepresented people in the engineering industry.

C&S established its IDEA (Inclusion, Diversity, Equity, and Awareness) Alliance, a volunteer group that has grown to about 60 employees, in 2020.

The group’s goal is to promote personal and professional growth by cultivating and sustaining a safe and inclusive atmosphere where everyone can feel a sense of belonging.

“We are honored to receive this award recognizing the efforts of the IDEA Alliance as we continue on our journey to make C&S a more inclusive, diverse, and equitable workplace,” said Aileen Maguire Meyer, one of the group’s key members. The IDEA Alliance progresses its initiatives in seven focus areas that include: community collaboration, culture, leadership, mentoring and advocacy, recruiting and retention, training and education, and supplier diversity.

ACEC New York is a proactive coalition representing nearly 300 member firms who engage in every discipline of engineering related to the built environment including civil, structural, mechanical, electrical, environmental, and geotechnical. The group’s work involves advocating, education, providing networking opportunities and enhancing the image of the industry.

She offers services in the areas of real estate, probate and estate elanning.

Reed graduated from Syracuse University College of Law in 2020 and practiced as a paralegal for more than 25 years. Reed said she has personal experience working with families in our community as they experience life altering changes, such as the loss of a loved one, estate planning challenges or the purchase their first home.

On Point for College Has New Career Adviser

Stephanie Meeker recently joined On Point for College (On Point) as a career adviser in Oswego County. In this role, Meeker provides counsel to On Point students and graduates in Oswego County on career opportunities and employment that aligns with their skills and education.

Prior to joining On Point, Meeker worked most recently as a supervisor and case specialist for Elmcrest Children’s Center in Oswego, an adoption counselor at Adoption STAR in Buffalo, and as a visitation supervisor for Catholic Charities of Oswego County.

On Point for College is a nationally recognized college attainment program founded in 1999 to help first-generation students gain access to college. It subsequently expanded its offerings to include college success and completion support, career planning and placement support, and most recently, support with non-college post-secondary credential attainment.

“We’re delighted to have Susan as part of our team,” said David Dingman, co-owner of both pharmacies.” She is well known in the Fulton community for her previous position as the pharmacy manager at Walgreens, and for her service as treasurer of the Fulton Lions Club and a member of the Fulton Memorial Day Salute Committee.”

Daratt, a native of Cato and a graduate of St. John Fisher College with a Doctor of Pharmacy degree, resides in Fulton with Alex Conn and their pup, Maggie. “Patient care has always been my number one priority,” Daratt said. “I am so happy to join the Fulton Medicine Place family that shares the same values and high standards that I do in terms of patient interaction and personal service. The city of Fulton has become my home and I take great pride in taking care of my friends, family and community.

Working with the experienced team at the Fulton Medicine Place will allow me to continue to do this while growing these relationships and developing new ones.”

The Fulton Medicine Place, co-owned by David and Tracy Dingman, celebrated its 34thyear in November. The Phoenix location opened in January 2007.

“Both the Fulton and Phoenix pharmacies are locally owned, yet they are also part of the Leader system of over 3,000 stores,” Dingman said. “This allows us to offer you the personal service you deserve, as well as competitive chain-drugstore pricing.”