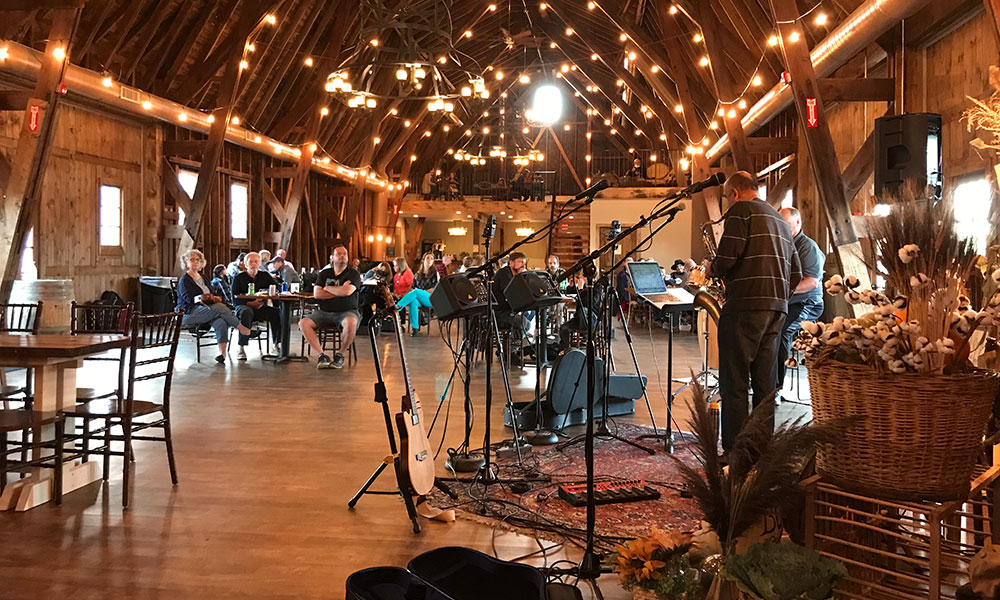 Open mics returned on a monthly basis to the wide-open space that is a converted barn in Curtis Manor in Oswego.

‘While so many things about the pandemic and the turbulent political times made people feel separated and isolated, it also pulled people together.’

March 11, 2020, sticks in my mind as the day the world turned upside down. That was when events near and far suddenly took COVID-19 out of the abstract and into the concrete — a kind of wet concrete that soon encased our lives and lifestyles.

For me, March 11, over the years, was a date of parting with the familiar. A much earlier March 11 is when our first cat, Sylvester, passed away. It was also a March 11 that we bid goodbye (and good riddance) to my mother’s ragged old Pinto (the only working door was the hatchback). The 2020 version felt much more like saying farewell to a world we loved; but in hindsight it also allowed an opportunity to cast off some junk in our lives.

On March 11, the governor announced that SUNY and CUNY schools would switch to remote learning at the end of that week. That day, I went to teach what would be my last in-person class of the semester to find only half my class attending, and those present weren’t really “there” because they weren’t really sure how to react. I didn’t teach so much as try to provide any comfort I could.

March 11 featured high drama on the national stage as well, as a doctor raced onto the court of an NBA game to stop it because one of the players had tested positive. Suddenly, the league suspended the rest of its season, and many others would follow.

Friday, March 13, we heard that my kid’s school was suspending face-to-face classes. For at least a month, or so the original expectation went.

I was in denial, like many. Maybe students can come back to campus after an extended spring break and my son will be back in a classroom in April, I thought.

But reality set in, feeling like the world closing in on us. More and more colleges and schools suspended in-person learning. Sports leagues and other institutions came to a halt. Bars, restaurants and so-called “non-essential” businesses could no longer host customers. Most private businesses were told to work remotely or not at all. Things I looked forward to were canceled or postponed.

By Friday, March 20, our whole team was working remotely. I left the office at noon that day not sure when I would be working there on a regular basis again.

And, I still don’t know, to be honest. I’ve been back on campus and in my office, but even a few hours behind my desk feel lonely and transitional.

My heart lifted somewhat as I watched the curve flatten — faster than original projections because New Yorkers were doing the right things.

I discovered Instacart, and gladly paid for its convenience. I would shout a loud “thank you” at a distance to the delivery person, who was sometimes the only human being I’d see for days. I tried to shop locally to support any businesses still functioning; my kid and I got a lot more food from Bridge Street Pizza and more than we would otherwise. But it felt and tasted great.

Other businesses adjusted any way they could. River’s End Bookstore was an example, as they delivered books or worked on the kinds of to-go orders that restaurants relied on to subsist.

In time, every round of openings felt like a small but not insignificant weight coming off our overburdened souls. A bevy of businesses — banks and bakers and barbershops and bookstores, and eventually even bars and BBQ joints — reopened, and while things didn’t seem “normal,” we could at least regain some routine. Going to Bosco’s, even while wearing a mask and speaking with the cashier through Plexiglas, felt like a different life but at least felt more like living.

With the exception of masks, distances and the cancellation of so many events, summer felt like the high point on the happiness curve for many people because it was lower on the positivity curve for the pandemic.

For many businesses, having a deck or outdoor area where people could dine or be entertained was a huge value-added.

Summer got people out and about. In good weather, I would see people hiking at Rice Creek Field Station or the Sterling Nature Center. But parks and playgrounds felt like they had new rules of engagement. The playgrounds I went to with my kid were sparsely attended. He really wanted to play with other kids, so I felt for him. We’d go to the Children’s Museum of Oswego and he could play somewhere near other children, so that helped somewhat.

Summer festivals did not return, but at least music did. Friends started doing weekly online shows with virtual tip jars, especially needed for those who perform for a living. Steamers offered first a weekly streaming concert to go with pick-up food, and later with in-person dining.

I was able to play at open mic at Turtle Cove, with a spacious and open-air back deck in a village with low density offering more favorable conditions.

In fall, students on various levels returned to in-person or hybrid classes. Some working parents continued juggling their jobs and having children attend school online under the same roof. The pandemic has shown how technology, especially in terms of working computers and good internet connection, is a much more valuable commodity than many of us realized.

But the COVID-19 rollercoaster brought people back down in the fall with climbing numbers, then a drop, then another spike around the holidays.

Along the way, many folks tried to shop locally over the holidays as best they could. They still supported charitable causes, knowing their neighbors were hurting, too.

Maybe that’s one of the most impressive takeaways. While so many things about the pandemic and the turbulent political times made people feel separated and isolated, it also pulled people together.

I’m on the steering committee for the college’s State Employees Federated Appeal (SEFA) campaign, a partnership with the United Way and other local causes. The question arose whether we thought we could make the usual $30,000 goal. The committee didn’t flinch — in a time of greater need, the show would go on. It had to.

SEFA and the campus ended up exceeding that goal handily. It turns out that doing virtual events actually encouraged more buy-in. Out of convenience, partly, but many people saw this as a way to give back … they could feel better about themselves knowing they were helping others.

In a time, when it feels like so much is out of our control, doing a little to make one’s corner of the world better in any ways we can feels like a very valuable thing.

What will the long-term impact be of this past year and all the adjustments? Will many organizations see offices as more optional and telecommuting more acceptable? Will some form of remote learning education remain an option now that it has been done to some degree? Will offering convenient and friendly delivery and takeout methods stay vital once most of the population is vaccinated?

Moreover, will we learn our lessons about what the past year has shown us is truly important in our lives and communities?

With vaccinations and spirits on the rise, hope is a greater commodity than it’s been in more than a year.