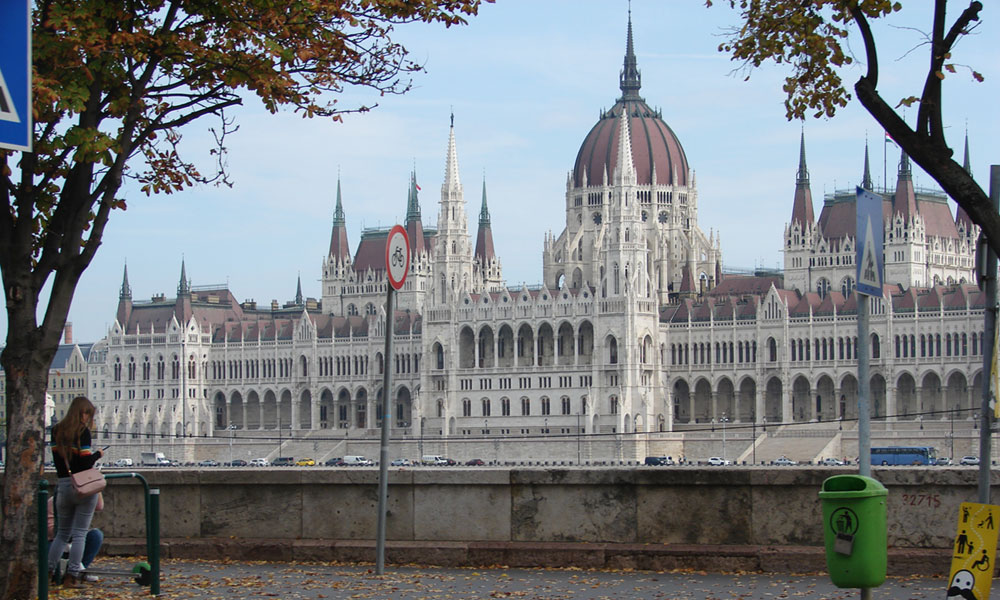 The Parliament building is probably the most recognized building in Hungary.

Budapest, one of the great cities of Europe, has been inhabited since Roman times. At one time there were three cities situated on the Danube: Buda, site of the royal residence; Pest, with its dynamic growth from the 19th century; and Óbuda, known for its somewhat less urban but cheerful restaurants and citizens.

In 1873 the three cities united and experienced a pace of development which was virtually unmatched in Europe. From 1867 to 1918 Budapest shared the capital of the Austria-Hungary Empire with Vienna. The Hungarians called it “Belle Époque,” a period of “happy peacetime.”

The 19th-century Chain Bridge connects the hilly Buda district with the flat Pest area. It was the first bridge to connect the two sides of the city. Before that people had to use ferries.

The story goes that Count Istvan Szechenyi, a prominent politician and writer, was on one side of the river when his father died. It was winter, and the ferry could not make the crossing so he missed his father’s funeral. The count’s family was instrumental in having the Chain Bridge constructed. It was regarded as one the modern world’s engineering wonders.

A hop-on bus tour is the best way to get acquainted with Budapest. The bus stops at major tourist spots, including Heroes’ Square, one of the major squares in Budapest, noted for its iconic statue complex featuring the seven chieftains of the Magyars (Hungarians) and other important Hungarian national leaders, as well as the Memorial Stone of Heroes. The seven chieftains were the leaders of the seven tribes that arrived in the area from the Carpathian Mountain area in AD 895.

The Parliament building is probably the most recognized building in Hungary. It is there that one can see the Holy Crown of Hungary, also known as the Crown of St. Stephen, circa 1526.

The crown had a varied history: it had been stolen, hidden, lost, recovered and traveled abroad. In 1848 the crown was buried in a wooden box in the forest in Transylvania, now Romania. At the end of the World War II the crown made its way to the United States for safe keeping from the Russians. It was kept in Fort Knox until 1978 when, by order of President Carter, it was returned to Budapest.

Near the Parliament building is a fairly new memorial, Shoes on the Bank of Danube, to honor the thousands of Jewish people who were executed by fascist Arrow Cross militiamen in Budapest during World War II.

The best view of the Parliament is from a river cruise which is often included with a hop-on bus tour ticket. It cruises by the Buda Castle that was built between 1749 and 1769 as the Royal Palace; Fisherman’s Bastion, a neo-Gothic bastion that commemorates the Fishermen’s Market with seven towers that represent the seven Hungarian tribes; Margaret Island which is the recreational park located in the Danube River; and Gellert Hill topped with a Statue of Liberty and where the famous Gellert Hotel spa is located.

Budapest, and all of Hungary, is noted for its excellent cuisine. A cooking class at one of the cooking schools such as ChefParade is a great way to meet and chat with a local while learning how to cook some iconic Hungarian recipes such as goulash, chicken paprikash and apple strudel. The meal at the end usually includes Hungarian unicum, an herbal liqueur, or pálinka, a type of fruit brandy. There are many places to see Hungarian folk shows, some of which include a meal.

Only a US passport is needed for entry into Hungary. While the Hungarian language is not closely related to most other European languages, English is widely spoken. The money is called forints but credit cards are widely accepted as are euros and U.S. dollars.