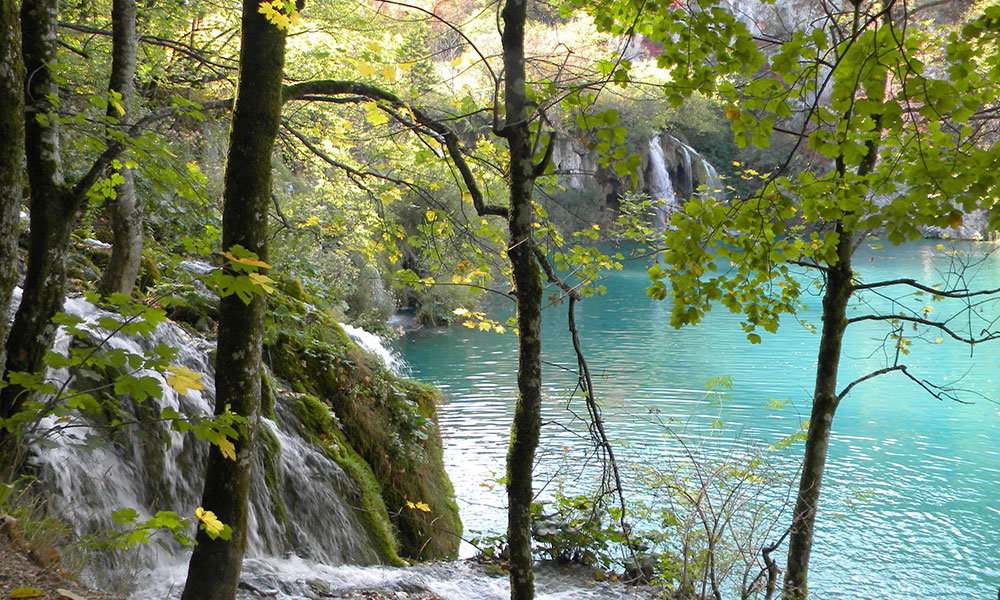 Beautiful Plitvice Lake National Park with trails along lakes and past waterfalls is about two hours away. It’s located in Zagreb, Croatia’s capital since 1991.

Of all the places Emperor Diocletian could have chosen in the vast Roman Empire to build his retirement palace, he selected present-day Split, Croatia. Why? Because Croatia’s Dalmatian Coast and Mediterranean climate, where Split is located, cannot be surpassed.

Even though it was built in the 4th century, parts of Diocletian’s palace are still in use, making it one of the best-preserved Roman sites. The UNESCO site is the living, pulsating heart of the city. Diocletian, noted for his persecution of early Christians, would never imagine that the temple that was to be his mausoleum is now the Cathedral of St. Dominus. Not to miss is the Temple of Juniper, guarded by a headless sphinx and the basement halls revealing more of the palace’s 4th century structure.

Split is an ideal base for visiting the ruins of the ancient city of Solin, picturesque islands and small towns. In the nearby town of Omis there is a boat ride on Centina River to the rapids, which is popular with whitewater rafters. The river seems to disappear between the towering cliffs making it easy to understand why it was once the perfect hideaway for pirates.

There is a ferry from Split to Dubrovnik. The scenery from the relaxing nine-hour ferry ride is wondrous. The ferry stops for a short time at Hvar, Croatia’s most popular and luxurious island; and Korcula, an enchanting walled city. Both are destinations in their own right.

Dubrovnik is another of Croatia’s UNESCO World Heritage sites and a do-not-miss. It is a living museum — a city where people live, work and play since the 7th century, which is what makes it so special. Add to that the fact that during the war in the early 1990s over half of the buildings were hit and several palaces destroyed. Now everything has been completely restored. During the 1500s the drawbridge entrances to Dubrovnik were lifted every night, the large heavy gates closed and locked, after which the key was handed to the prince. Times have changed. The city is popular with tourists and it is now a cruise port destination. Wander the morning market in the large square near Pucic Palace where the scent of lavender fills the air and there are often folkloric shows.

The impressive city walls of Dubrovnik were built between the 13th and 16th century. Take a leisurely three-hour stroll atop the city walls for spectacular views. Like Split, Dubrovnik could be a destination onto itself as there are plenty of things to do, including visiting museums, attending concerts, taking boat trips to various islands, and a plethora of sport activities from swimming to kayaking.

Dubrovnik is especially romantic in the evening when the streets are devoid of tourists and workers. Most evenings there are concerts in one of the many small churches.

Zagreb, became the capital of the newly formed country of Croatia in 1991, but its history is at least a thousand years old. The large square in the Lower Town is where locals like to relax while sipping coffee in one of the many cafes. In Upper Town there is a colorful flower market in Kaptol Square. Nearby is the cathedral and the museum of the City of Zagreb, housed in the Convent of St. Clair with an informative overview of Zagreb and Croatian history. Beautiful Plitvice Lake National Park with trails along lakes and past waterfalls is about two hours away.

A valid passport is required for travel to Croatia. A visa is not required for U.S. passport holders for tourist and business trips up to 90 days. The Croatian Kuna is the currency of Croatia which can easily be obtained at a hotel, bank or ATM machine.

Taiwan, the ‘Other’ China

Macau: Vegas of the East