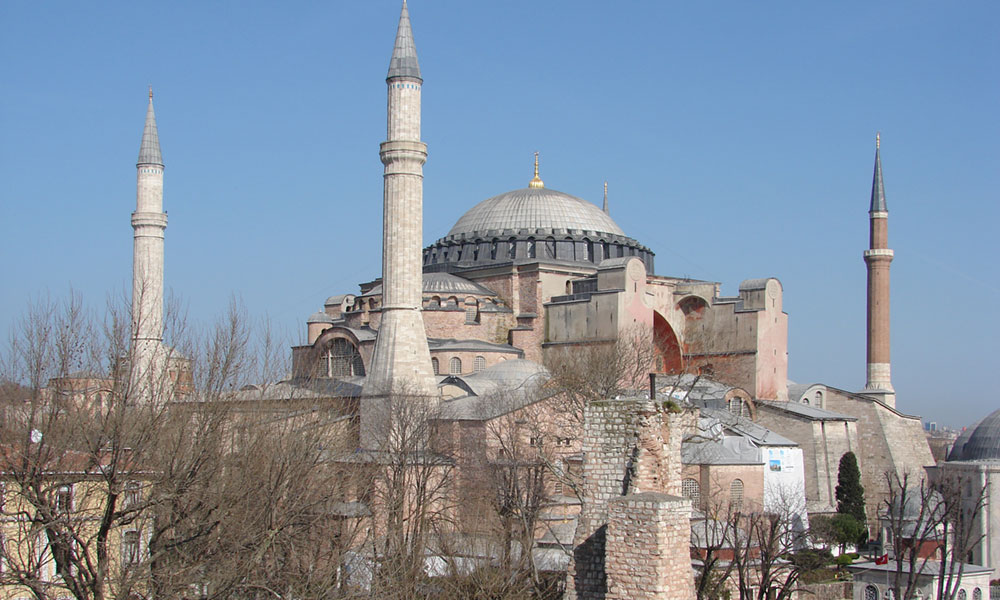 The Sultan Ahmed Mosque, also known as the Blue Mosque, is a functioning mosque constructed between 1609 and 1616. It’s one of Istanbul’s top tourist attraction.

Visit two continents but just one city. It is where East meets West. The Bosporus Strait separates the city of Istanbul in Turkey with Asia on one side and Europe on the other.

Its strategic location has made it a crossroads of the world, where the influences of many empires are still evident. An inexpensive ferry connects Europe and Asia.

Istanbul was the capital of both the Byzantine and Ottoman empires. The city has been known by several names, Byzantium, Stamboul and Constantinople. A gold record by The Four Lads celebrated the 500th anniversary in 1953 of the fall of Constantinople to the Ottomans with the song, “Istanbul (Not Constantinople),” a lighthearted reference to the name change.

Constantinople was protected by a series of walls that were added to and modified over the years. It was considered one of the most complex and elaborate systems ever built, portions of which are still visible in places.

The best place to get an overview of the city is from Galata Tower, built in the 1300s. It is one of the highest and oldest in Istanbul. It was once used for surveillance and now offers a great 360 view of the city. Elevators carry visitors to the upper levels. Besides the view, there is a restaurant and a nightclub that hosts a Turkish show.

The Sultan Ahmed Mosque, familiarly known as the Blue Mosque, is a functioning mosque that is also a top tourist attraction. Constructed between 1609 and 1616, the name is derived from the hand-painted blue tiles that adorn the interior and the blue stained glass windows. Nearby is the Hagia Sophia, Istanbul’s principal mosque and another popular tourist site. Construction started in 537 and at one time it was the largest Christian Church in the Byzantine Empire. In 1453 with the takeover of the Ottoman Empire it was converted to a mosque. When visiting a mosque, modest dress is required, most mosques provide wraps, and shoes must be removed.

To see how the powerful once lived and some of their riches visit Topkapi Palace built in the 1400s and Dolmabahçe Palace, the largest palace in Turkey with 285 rooms.

Don’t miss bumping shoulders with the everyday people at the Grand Bazaar, one of the largest and oldest markets in the world with over 4,000 shops. It is considered one of the world’s first shopping malls and it can be overwhelming. Just go slow taking in the sights, sounds and the smells. Accept the free samples, and bargaining is the norm. For a riot of color and smells stop by the Spice Market.

The Basilica Cistern is an incredible underground water system built it in 532 to provide water to the grand palace. Readers of Dan Brown’s book “Inferno” will recognize it as where one of the book’s most dramatic scenes takes place. Concerts are held here on occasion.

Enjoy some of Turkey’s delicious cuisine. The most famous sweets are Turkish delights, a jelled confection that may contain dates and nuts; and baklava, thin layers of dough with nuts and syrup. A common street food is the “doner” similar to a Greek gyro. Turkish coffee is strong and often sweetened with sugar and cardamom. “rucka” is the national drink similar to anise-flavored ouzo

Visitors need a valid passport and a visa, which can be acquired online. Mastercard and Visa are widely accepted. Credit cards from credit unions do not always work outside the United States. On the streets there are touts offering free tours and other freebies which ultimately end up including a visit to their “uncle’s” carpet store. It is best to decline unless you want to buy a carpet.

Remembering the Pandemic Is Everybody’s Business