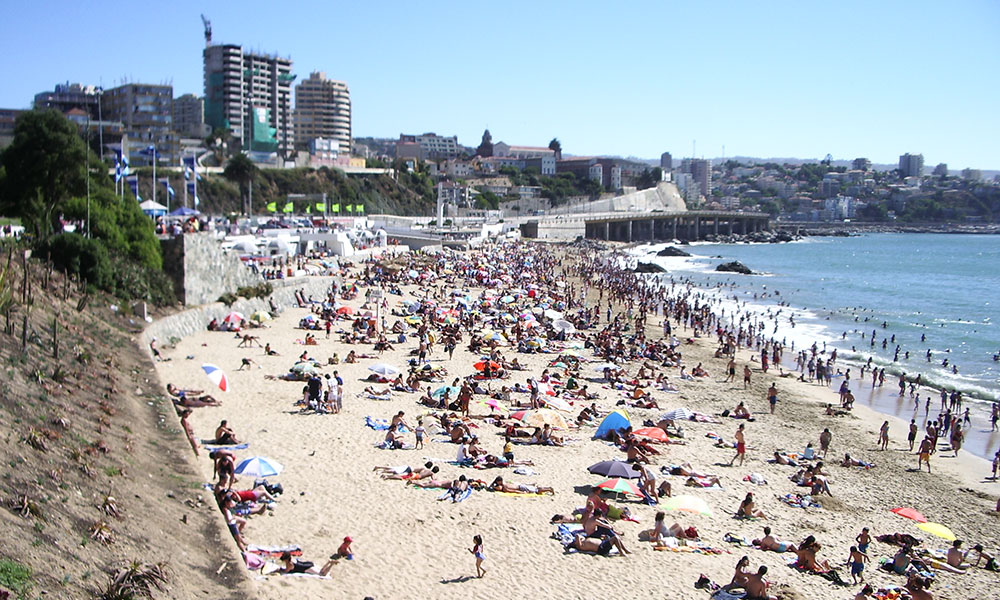 Beach at Vina del Mar, a resort city about 90 minutes from Santiago, is a popular destination.

Chile is the longest country in the world measuring north to south with the Andes on the eastern border and the Pacific Ocean on the west. The Andes are visible from just about any place in Chile, albeit from a distance.

Santiago, the capital and largest city, is the perfect place to spend a few days before heading out to some of Chile’s exotic destinations such as Patagonia in the south and the Atacama Desert in the north or the remote Easter Island (Rapa Nui) with the unique Moai statues. But before heading out, there are several things to see and do in Chile’s largest city.

The heart of the city is Plaza de Armas, the colonial center, home to the 1808 Royal Palace, which in now the National History Museum, the perfect place to learn about the country’s history from pre-colonial to the present.

The neoclassic Metropolitan Cathedral constructed between 1753 and 1799 is a quiet place to sit and marvel at the lavish interior. The plaza is always busy but the best time to visit is on the weekend when visitors are welcomed to sit down for a game of chess or join people dancing the cueca, the national dance. The plaza also attracts painters, musician, mimes and vendors of food and handicrafts. Not far from Plaza de Armas is the Palacio de La Moneda, the seat of government, and nearby is a statue to former and controversial Marxist President Salvador Allende.

Avoid the hustle and bustle of downtown by heading to Cerro Santa Lucia with more than 1,000 trees of different species, beautiful gardens and small squares. Most visitors take the elevator to the top but the fit can follow the long path dotted with stone steps. There are several photo ops along the way, including an award-wining statue of a vigilant Indigenous chief on the lookout for Spanish conquistadors. A huge terrace serves as a lookout.

The most impressive panoramic view is from Cerro San Cristobal at an elevation of nearly 3,000 feet. It is the city’s largest urban natural area. Getting to the top can be part of the fun. From the zoo at the bottom the hearty can follow the upward trail which takes nearly two hours. Others can take the funicular or cable car. At the lookout point there is a 72-foot statue of the Virgin Mary.

One of the most popular day trips, especially in the summer, is to the resort coastal city of Vina del Mar. It is only an hour and half away from Santiago and easily accessible by bus. Most people visit to enjoy the beach but not to miss is Quinta Vergara, a park that is home to Palacio Vergara, the home of the city’s founder; the amphitheater that hosts the International Song Festival; and beautiful gardens. Picturesque historic Wulff Castle is the city’s heritage center. From Vina del Mar, Valparaíso is easily accessible by bus or subway in less than 15 minutes. From Valparaiso the drive to the sand dunes is about 20 minutes and the Humboldt penguins are about an hour away.

The best way to get an overview of Santiago is on a hop-on bus tour. Tickets are usually available at the bus stop. The metro station provides access to many parts of Santiago. “Tours by Locals” is a great way to get a personalized tour, not only of Santiago and nearby cities but some locals offer specialized experiences like horseback riding in the Andes and a food and wine tour.

Americans only need a valid passport good for at least six months. US dollars are accepted in some hotels but it is best to exchange it to pesos at a bank. Print out an on-line “cheat sheet” before you go to take the brain work out of making the monetary conversions.

Unlike some South American countries, bargaining is generally not the norm in Chile.