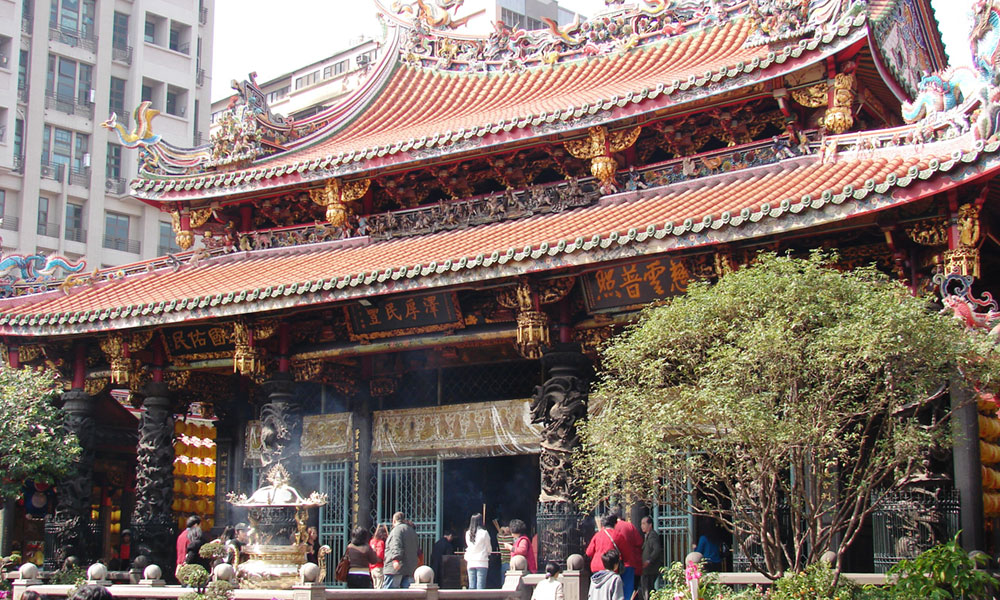 The oldest and most important Taiwanese temple is Longshan founded in 1738.

Unfortunately, the island of Taiwan is often overlooked as a tourist destination. But it has a fascinating history and many interesting places to visit.

Once called Formosa, it was at various times under control of China and Japan. During the Chinese Communist Revolution, Chiang Kai-shek headed up the Chinese Nationalist Party that was defeated by Mao Zedong, the leader of the Communist Party. Chiang Kai-shek and his supporters were forced to flee to Taiwan where they set up the Republic of China. Kai-shek served as its president until his death in 1975. Taiwan has a democratic and liberal government while preserving ancestor worship and other cultural traditions.

For those who are just passing through, the airport offers a free city tour. All travel starts in the capital, Taipei, once the home of the world’s tallest building, Taipei 101. It is located in the financial district and the architecture includes many aspects that are considered financially auspicious in Chinese culture. Not only is the city view from the observatory outstanding, visitors can watch the swinging damper that offsets the building’s movement keeping it secure during earthquakes and typhoons.

In the heart of the city is the Chiang Kai-shek Memorial Hall that honors the first president of the country. There are 89 steps to reach the entrance, one for each year of his life. In the main hall there is a large statue of Kai-shek with an honor guard. The oldest and most important Taiwanese temple is Longshan founded in 1738. The temple is a mix of Taoism, Buddhism and Confucianism, which is a prime example of the inclusive spirit of the Taiwanese. To learn more about Taiwanese culture visit the National Museum, which covers the history and natural aspect of the country.

There are many things to do in Taipei but to really experience the “real” Taiwan, visitors should visit some of the places outside the city.

A fascinating day trip is to Wulai, an aboriginal village, where visitors can soak in the outdoor hot springs, enjoy the mountain views and learn more about the Atayal culture. The Atayal are thought to have arrived on Taiwan about 6000 years ago and are struggling to preserve their culture. Visitors can hike the trail to the largest waterfalls in the Wulai Gorge or view it from the Wulai Scenic Train, a converted Japanese mining train. Homestays are also possible.

More than one day should be devoted to visiting the Taroko Gorge National Park, one of the natural wonders of Taiwan. It is located on the east coast and home to the world’s largest marble valley, waterfalls, temples and suspension bridges. It is a favorite with hikers.

Tea is an integral part of Taiwanese daily life and culture. They enjoy their daily tea but tea was also used ceremoniously during rituals such as weddings, funerals and family worship. Tea was offered to gods and guests alike. Artists who create tea cups and tea pots are highly regarded. The high-speed railway makes it easy to visit the tea producing areas. The rolling hills lined with tea trees are common in the south part of the island. There are tea museums that explain the different kinds of teas and the how they are processed. Several tea plantations offer homestays.

The food of Taiwan is an interesting mix of Chinese and Japanese who controlled the island from 1895 to 1945, with a dash of American cuisine. The best and most interesting place to sample the variety of food is at a night market held in most cities.

Americans only need a valid passport to visit Taiwan, a visa is not necessary.