The building that housed the first bank in the village of Mexico—built in 1855—is in the process of being restored, and soon it’ll be open to the public.

Volunteers from the Mexico Historical Society labored for years to save the historic tin shop building on Main Street from demolition and then to find the money to resurrect the structure.

They believed it was worth saving; the building’s owner was an abolitionist who sheltered escaped slaves in his home and shop as part of the Underground Railroad. Today visitors to the museum find the tin shop as it would’ve looked in the 1800s.

As proud as they were of the museum, something bothered them: a few steps away stood a vacant building.

“It drove us nuts because our building looks nice,” said Allie Proud, the longtime president of the historical society.

She said members felt the neglected two-story brick building detracted from the museum next door. 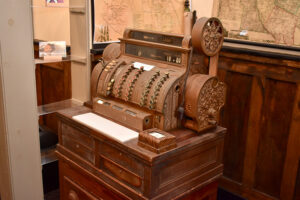 Vines climbed up the side of the building and the weeds and brush in front grew high enough to obscure part of the first story. It bothered them so much that they began pulling the weeds themselves. For a number of years, the back door wouldn’t close and teenagers would sneak in, Proud said.

Despite a somewhat ramshackle appearance, it was actually of historic interest. The building once housed the town’s first bank, said Jim Hotchkiss, treasurer of the historical society.

In 1855, James Chandler and Leonard Ames Jr. built the brick building and operated a private baking business there until 1865 when Ames withdrew from the firm. Chandler continued the business until 1867. The building continued to be used as a bank until the business was sold and moved to another building in town in 1903.

Afterward it served as a law office for many years, then the office of a pedigree business. In 1934, a small restaurant opened there. It later housed a farm production credit office and then the village hall. In 1996, the building became vacant.

“We thought, well we might be able to get it for a decent price,” he said.

It took several years to convince the owners to sell. Finally, in January 2020, the historical society bought the building.

The sale price was $25,000, but Hotchkiss said the owners plan to donate $10,000 to the historical society over several years.

“The first thing we did was to gut the inside,” he explained. “But of course, we didn’t know what was under the sheetrock.”

Each floor is about 900 square feet. The original cement vault was still in the middle of the building, but over the years the walls had been studded and covered over with sheetrock and a drop ceiling installed.

It wasn’t until workers started knocking down the drop ceiling — the original ceiling was about 12 feet high — that they discovered the ceiling consisted of quarter sawn oak paneling.

“I was just flabbergasted,” Hotchkiss said. “I think my chin just hit the floor.”

It turned out that the oak paneling covered the ceiling and walls. The walls were painted green like the rest of the interior,

but the ceiling was still stained. Except for a few spots where the studs had been nailed to the paneling, it was mostly free of damage.

“Nobody even suspected that it was like this,” Proud said. “I think that sheetrock had been there a long time.”

The historical society’s research on the building hadn’t uncovered any photographs of the interior and no one who’d occupied the building in the past could remember seeing oak paneling. Proud said they believe the paneling dates to the building’s construction.

Once they fully grasped how much of the original building remained intact — besides the woodwork the doors were original and the concrete vault had been untouched — the historical society decided to reconstruct the bank on the first floor and use the second floor for storage.

The cost of such an extensive project might seem like a tall order for a volunteer group with about 50 members, but Hotchkiss said the historical society was in a good position financially.

The group received several sizable grants to support the restoration of the tin shop, which helped keep it from depleting its funds on that project. The group has also had some generous donations over the years, including a significant bequest, which it has been careful to spend judiciously, Hotchkiss said. They’re also hoping to secure grant money to help complete the project.

After the green paint was removed from the oak paneling a cabinet maker carefully repaired the damaged areas.

The furnace and duct work were replaced and the electrical outlets and boxes were redone. A bathroom was torn out and the vault was repaired and painted. A new wooden floor is being installed. The original teller station was gone so workers built one using a set of period counters from a former pharmacy in town.

While there’s still some other work to do, Hotchkiss said the biggest remaining tasks are repointing the exterior brickwork and replacing the large front window, which isn’t original.

A portion of the original window was bricked up with modern bricks, which don’t match the building. A mason will need to remove the modern bricks, fill in part of the modern window and rebuild the original window space. Proud said they’ve acquired period bricks that will match the building. She said they hope to have the window work done in the summer at which point they can finish the paneling restoration.

In the meantime, the historical society has been researching what the bank’s interior might have looked like and collecting donated items to furnish it, including several desks. They’ve acquired a scale and a century-old cash register from an old store in town. They also have an original note printed by the bank — it was once common for banks to print their own money — and plan to reproduce sheets of the bank notes.

Proud said they’re still working out some of the details, such as what light fixtures they can install without detracting from the historic feel of a space that had no electrical lighting. She said they’re considering an electric chandelier and flood lights that are hidden from view. There’s also the question of how to present the vault. Since it no longer holds people’s valuables, she says they haven’t decided what to fill it with.

Hotchkiss says they plan to open the bank building for tours this summer. Although the process of restoring the building has taken several years, he said the final product will be worth the wait.

“We could have left it, but it was too nice to do that,” he said. “We thought we’ve got one museum here, why not a second one?”