Schools across the country, and right here in Central New York, are going to be looking for more teachers in the coming years.

A reported 27% of educators are considering changing professions or quitting altogether, many citing COVID-19 stress as a primary reason.

A recent poll by the New York State United Teachers union of 1,100 of its members found 55% of them, aged 55 or older, were considering early retirement.

“I can’t speak to the number of retirements this summer because I don’t have access to data on that,” said Matt Hamilton, who handles media inquiries for the New York State United Teachers union. “The best I can say is that certainly we’re seeing the workforce skew more toward educators at or near retirement age, about a third of them are.”

“Here at NYSUT, we have an initiative we call ‘Take a Look at Teaching’ to help address the teacher shortage we are seeing. It is driven in part by older teachers leaving the profession and a lack of new teachers in the pipeline to fill those positions,” he pointed out.

New York is facing declining enrollment in teacher education programs, increased retirements and shortages in difficult-to-staff subject areas and districts, both urban and rural, according to ‘Take a Look at Teaching.’ 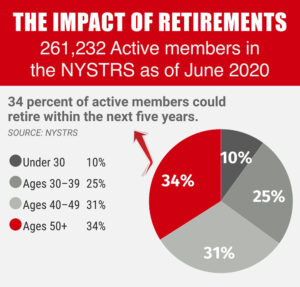 • Enrollment in New York state’s teacher education programs has declined by 50.4% since 2009.

• The NYS Teacher Retirement System projects that more than one-third of New York’s teachers are eligible or will soon be eligible to retire. State officials estimate districts may need up to 180,000 teachers in the next decade.

Growing anecdotal reports suggest shortages in many other subject areas, with urban and rural districts experiencing the most difficulty with recruitment and retention.

“I know some also have looked at how the stresses of the past 17 months have led to burnout among educators. I don’t have any New York-specific data on this, though, based on anecdotal evidence, burnout most certainly is a concern,” Hamilton said. “RAND, with support from the National Education Association and American Federation of Teachers, released a study on job-related stress in June, which found that about one in four teachers said they were likely to leave their jobs by the end of the most recent school year (compared with one in six who were likely to leave prior to the pandemic). That may not all be through retirement.”

Teachers who identified as Black or African American were most likely to be considering leaving, according to RAND, a nonprofit, nonpartisan research organization.

“Anecdotally, we hear that many teachers who can retire will do so. The stress with COVID-19, the new requirements and responsibilities and the pressure of the job may hasten their exit from the classroom,” according to Bill Spreter, vice president at NYSUT Retiree Council 7.

SUNY Oswego is doing its part to help fill the need for new teachers in the coming years. The university was formerly known as “teachers’ college.”

According to Amanda Fenlon, chairwoman of the curriculum and instruction department, the most recent enrollment numbers — total numbers of majors in childhood education grades 1-6, adolescence education — grades 7-12 (that includes content areas math, social studies, English and science education) and teaching English to speakers of other languages (Grades K-12) — are on the lower side:

If you look strictly at those numbers, you could get very depressed, she said.

“I’m hopeful about our preparation and students that are coming into teaching want to become teachers, they really want to become teachers,” she added. “SUNY Oswego has always been at the forefront of teacher education. If you go back to Edward Austin Sheldon, he was really a pioneer in teaching practices. We continue to do very innovative cutting-edge preparation for our students.”

There will be a massive teacher shortage in the coming years, she noted, adding, “We’re already experiencing it.”

“I have superintendents calling me every week and saying, ‘Do you have any graduates? We need this math position filled.’ And then they’ll say in the second breath, ‘You know what? We’ll even take your student teachers, we’ll hire them,’” Fenlon said.

“Teaching is hard, it’s a hard profession; it’s rewarding,” Fenlon said. Young people aren’t necessarily going into teaching anymore because the pay is not maybe as competitive as they would like, she said, adding that the 2008 economic downturn certainly had an impact on young people, “they maybe felt like maybe teaching was not as secure a profession as others.”

“When I talk to students coming into our programs, I tell them, ‘you have made the right decision to become a teacher.”

Amanda Fenlon, chairwoman of the
curriculum and instruction department at SUNY Oswego

A good time for education majors

“When I talk to students coming into our programs, I tell them, ‘you have made the right decision to become a teacher. This is a great time to enter the teaching profession, you can pretty much write your ticket,’” she said. “Now people are retiring, there is a real shortage, especially in our rural districts and even in urban districts. New teachers will be in high demand.”

Districts who can’t find a teacher may end up hiring someone who’s uncertified, she noted, adding, “That’s a real disservice to the children.”

Fenlon had high praise for the SUNY Oswego students.

“Our students have just been amazing,” she said. “You cannot believe what they have had to do to get through this last year and a half and stay focused and be resilient.”

SUNY Oswego has done a good job the last few years in recruiting students of color into the teaching profession. It’s important for students in urban settings to see teachers of color, to see themselves basically in the classroom, she said.

“Besides this pandemic year, our numbers were slowly creeping up (in the program),” she said. “We are hopeful that they will continue growing. With record numbers of teachers retiring, the market for new teachers is very strong. There’s a lot of reason for hope for us.”

Fees, Fees, Fees: Why Banking Costs So Much