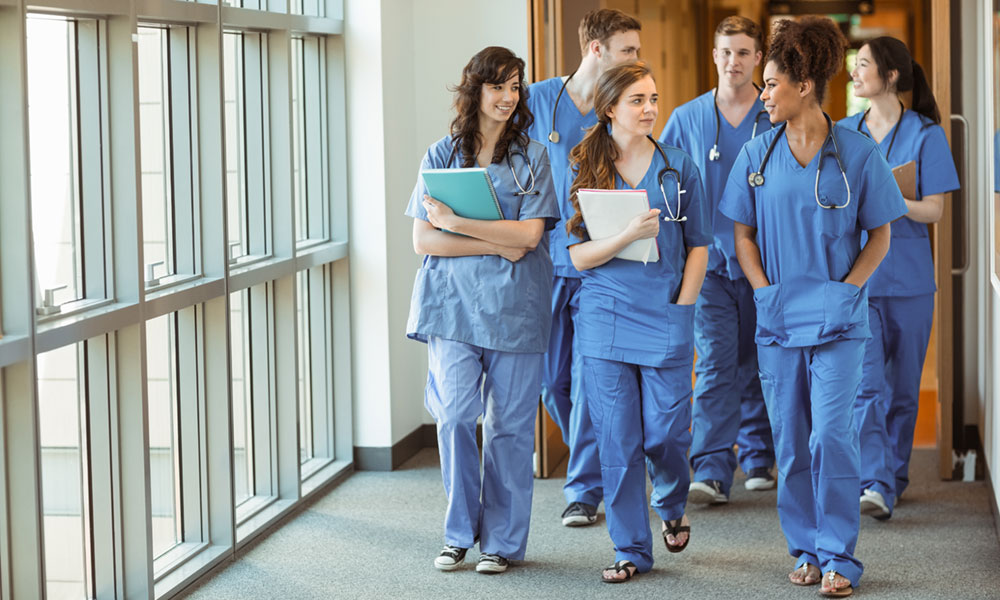 Enrollment is up 40% at University at Buffalo, 26.2% at SUNY Upstate Medical University. Experts attribute that to ‘Fauci Effect’

Cassidy McGinn, a 22-year-old from Tully, has always considered pursuing a career in medicine, but it was never a guarantee.

Even though her major at SUNY Geneseo was chemistry, McGinn was also interested in other professions. She even considered going to law school.

It wasn’t until her senior year at SUNY Geneseo, in the fall of 2019, that McGinn finally settled on medical school. She applied for admission to SUNY Upstate Medical University and was accepted. It was at this moment, after McGinn had finally found her footing in the world, when the world itself shifted underneath her. COVID-19 struck.

“This pandemic came quickly to the United States and it was evident that we didn’t have the proper PPE, we were understaffed in a lot of hospitals, they didn’t have the resources,” McGinn recounted. “So, it definitely takes a certain type of person to pursue this career.”

As it so happens, McGinn is that exact type of person. The pandemic didn’t make her regret the decision to go into the medical field at all. If anything, she says, it had the opposite effect.

“If you know anything about med students, it’s that they’re persistent, it’s that they are courageous, and they need to be resilient,” McGinn said. “I think in a time when the medical community has been so challenged, I think it reaffirmed my decision to apply to medical school and the same thing goes for a lot of other premedical students.”

McGinn is right. Rather than serving as a deterrent, the coronavirus served as a rallying cry. Applications for medical schools have surged across the country in the past year — up 18% according to the Association of American Medical Colleges. Some schools in New York are seeing even bigger numbers. M.D. program applications rose by 40% at University at Buffalo and 26.2% at SUNY Upstate Medical University compared to 2019.

Although encouraged by the spike, physician Lawrence Chin, dean of Upstate Medical University’s College of Medicine, said he is not surprised.

As the shadow of the pandemic spread across the world in spring 2020, Chin said the students enrolled at SUNY Upstate stepped up to the plate. They volunteered in large numbers by manning the phone lines for contact tracing and helping test people.

“So, I knew that this was going to kind of be a challenge to young people and also an opportunity for them to make a difference,” Chin said.

Equally motivating for this class of future medical professionals, Chin says, was watching the healthcare system actually make that difference in the world. They witnessed the rapid mobilization of every end of the medical field – from frontline workers saving people with COVID-19 who were on the threshold of death to developing multiple vaccines in record time. Upstate itself played a major role in this fight. The U.S. Food and Drug Administration recently named a test Upstate developed as the No. 1 COVID-19 saliva test in the world.

While all frontline workers are inspiring in their own right, this spike in applications to medical schools is being named for one in particular: Dr. Anthony Fauci, director of the National Institute of Allergy and Infectious Diseases.

With his dogged persistence in educating the public about the coronavirus and how to combat it in the face of nonsensical backlash from a small but loud group who question science, Fauci has developed a large fanbase. Among them is McGinn, who called Fauci one of the best public figures of our time.

And now it can be said that Fauci also has what could be referred to as a following. Many healthcare professionals attribute the rising interest in pursuing a career in medicine at this moment to the so-called “Fauci Effect.”

“There are so many people involved at the federal level, at the state level, and at the local level, but he is a symbol, emblematic of the kind of example of what we’re trying to do at academic institutions like Upstate –following the science, using science,” Chin said. “Dr. Fauci is an excellent example of how we communicate it to the public so that they trust what they’re hearing and that they trust the treatment, and the messages we are sending like wearing a mask.”

God willing, the pandemic will end before this incoming class of medical students graduate and have a chance to be the next Fauci. But even if that does happen, Chin said the work is far from over. COVID-19 exposed many of the health inequities and disparities that exist in the United States. For example, the mortality rate from this disease is higher among Black Americans than white Americans even though that community represents a smaller share of the nation’s population. The next generation of medical leaders will be called on to carry the baton in those fights and others.

“The combination of this pandemic and the need to right the health inequities that exist really capture the imagination and I think that also is driving interest in medical schools,” Chin said. “There’s certainly a long way to go and you have a group of students that see an opportunity for them to participate in making a difference.”

What You Should Know Before Applying for a Business Loan