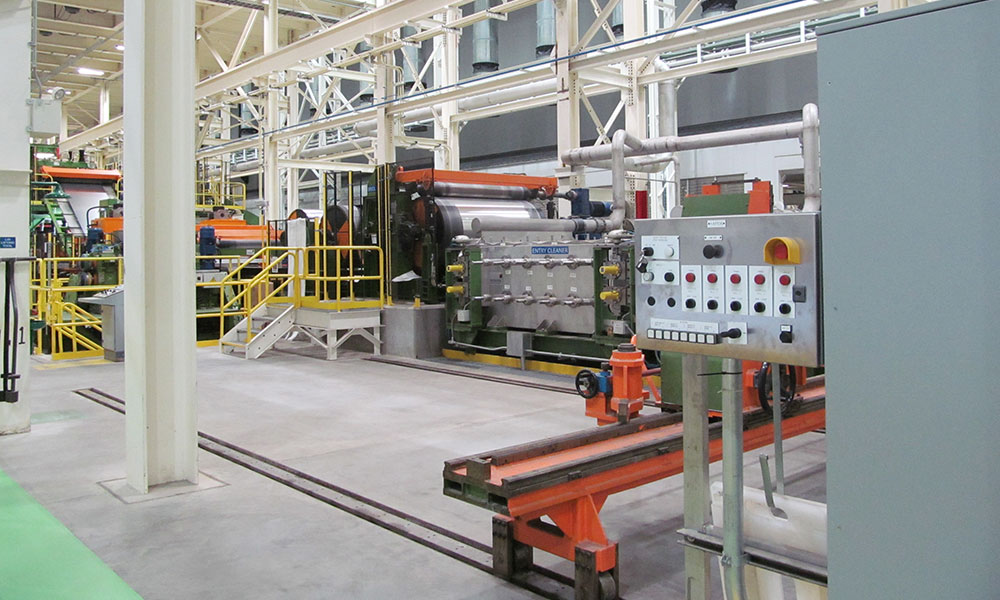 Last March, Novelis partially closed its 1.7-million-square-foot plant after some of its largest customers, including automakers, shut down due to the pandemic. The company ramped production back up that summer. File photo, 2016.

Thanks to the diversity of products and clients, Novelis won’t slow down as chip shortage forces automakers to slash production

When automakers announced that the worsening global shortage of computer chips was forcing them to temporarily close factories, it raised questions about how companies supplying the auto industry would be affected.

Last March, Novelis partially closed its 1.7-million-square-foot plant after some of its largest customers, including automakers, shut down due to the pandemic. The company ramped production back up that summer.

A similar scenario now is unlikely, the company says.

“Recognizing the challenges presented by the chip shortage, Novelis is committed to working alongside our valued customers to innovate to meet their evolving needs and continue to deliver quality products,” says Leila Giancone, a company spokeswoman. “Due to strong customer demand across our markets, we don’t have plans to slow down production.”

The computer chip shortage driving automakers to halt production is the result of the modern global supply chain being interconnected, says Patrick Penfield, a professor of supply chain practice at Syracuse University.

Computer chips are not easy to make and chips of varying complexity are used in an ever-greater list of products including cell phones, laptops and automobiles.

During the pandemic last year automakers cut their chip orders, which have a lead time of about six months. The auto industry tends to use a fairly lean inventory process, meaning they don’t have vast quantities of components, such as chips, stockpiled.

“They were surprised that sales picked up so quickly and then they went to try and reorder chips and then the semiconductor chip manufacturers said, ‘well we don’t have enough capacity,’” Penfield says.

Chip makers experienced huge upticks in demand during the pandemic as consumers stuck at home purchased more electronics and appliances that use chips. The chips used in high-end electronics are more complex than those used in vehicles and make chip companies more money.

“So, for them, margin-wise, the automotive industry isn’t as attractive,” Penfield says.

To make matters worse, 70% of chips are manufactured in Asian countries such as Malaysia, China, South Korea and Taiwan. As the chip shortage began to ease earlier this year, the delta variant of the coronavirus hit many workers at chip factories, leading to shutdowns.

“The semiconductor chip companies are stressed as it is from a capacity standpoint, but now they’re not producing because the workers can’t go to work,” Penfield says.

The chip shortage, which some experts believe could extend well into next year, has affected all automakers. Ford and GM, for example, have idled or reduced production at scores of plants.

With the auto industry on course to produce fewer cars and lose billions of dollars in the coming months, suppliers such as Novelis have had to take notice.

“If they are producing less, yes absolutely their orders will be less,” Penfield says of Novelis.

But the company’s Oswego County plant will likely benefit from the diversification of the products it produces.

In recent years Novelis has invested $400 million in expanding the plant, which dates to the 1960s. Once known for making aluminum beverage cans, Novelis switched its focus to supplying aluminum for the auto industry, which created hundreds of new jobs. But the plant — equipped for aluminum scrap re-melting, ingot casting, hot and cold rolling, and aluminum finishing — still makes products for the beverage can and specialty markets.

Penfield says Novelis is likely able to deal with less demand from the auto industry because its other business sectors have seen increased demand. The demand for beverage cans, for example, has soared to unprecedented levels.

“They’re fortunate that they have those other sectors to buffer against,” Penfield says. “If you’re the plant manager that’s the one thing you’re looking at: How do I absorb the cost of the actual factory?”

Another significant issue looming for Novelis and other aluminum producers is a potential disruption to the bauxite supply chain following a military coup d’état in early September in the mineral-rich west African nation of Guinea.

Guinea, a former French colony roughly twice the size of Pennsylvania, is a poor country of 13 million people that has been plagued by authoritarian regimes, political turmoil and violence. But it possesses, among other valuable minerals, the world’s largest reserves of bauxite. Guinea accounted for 22% of global production last year.

Bauxite ore is the primary source of aluminum. It has to be chemically processed to create aluminum oxide before it can be smelted using electrolysis to make pure aluminum.

Aluminum prices were already rising, but the uncertainty brought by the coup — which still may fail — has helped push prices to a 10-year high. Companies that buy bauxite in Guinea will likely be looking for other potential sources even if mining operations continue there.

“Novelis may not get it there but prices are going up,” Penfield says. “So Novelis is going to have some issues with cost and possibly deliveries.”

5 Things You Need to Know About Business Insurance