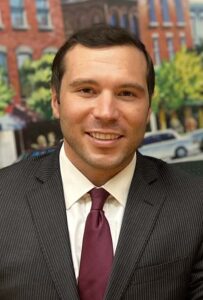 He recently unveiled two major projects. A 5,000-square-foot skatepark is planned to be constructed along the East Linear Riverwalk later this summer. And the city-owned and -operated Wright’s Landing Marina will host tiki boat tours throughout the summer.

The mayor said the Port City hopes to capitalize on its world-class waterfront in 2022. Construction continues with the $11 million transformation of the Cahill Pier. Phase two starts this spring, he noted.

Sheldon Beach, between the steam station and the college campus, is a popular site for many. However, the mayor described it as “unkempt, neglected and unpleasant.” He plans to transform it into a “legitimate park” with a small parking area, green space, a picnic area, a scenic overlook and a small trail providing access to the shoreline known by locals as Flat Rock.

In early March, Oswego residents will be able to use FoodFetched, an app to have food delivered to their homes. The city will cover delivery charges to residents and service charges to the business.

The tiki tours will launch this summer, Barlow said. Two boats will offer trips around the harbor. Another vessel, anchored, in the harbor, will accommodate up to 12 guests at one time.

The $400,000 skatepark will be well-lit, under 24/7 surveillance, with bathroom facilities and easy access from both sides of the river, according to the mayor. The city will work with Pillar Skateparks, owned, and operated by Oswego native Brad Siedlecki, he added.

All of the 12 downtown revitalization projects are either completed or near completion, the mayor said, adding that more than $100 million has been invested into the core downtown area with new buildings where vacant lots or dilapidated buildings once stood.

LITATRO and Riverwalk have introduced luxury residential units to the city that quickly filled with working professionals, most of whom moved into this community from outside the immediate area, the mayor said.
“We’ve paved almost $6 million in city streets, invested millions more in infrastructure and facilities, all while cutting taxes and reducing water and sewer bills by $300 since taking office,” he said.

The Wright’s Landing pavilion, outfitted with kitchen appliances and furniture perfect for a party rental or gathering site, will open this summer, he added.

The mayor wants to have events for the local community, as well as tourists.

If the pandemic conditions allow, the city will host the Independence Day parade and Harborfest in 2022.

Events like the summer concert series, Water Street Square mini-concert series and others are expected to return this year, Barlow said. A trio of downtown block parties is also planned.

Other 2022 goals include installing seven two-port electric car charging stations throughout the city, a full conversion to LED streetlights, upgrade the city-owned hydro dam and more.

This spring, the city will partner with a local company, FoodFetched. In early March, residents can use the app to have food delivered and the city will cover delivery charges to residents and service charges to the business, Barlow explained.

The mayor has earmarked $250,000 to create the City of Oswego Drug Task Force. It will “substantially increase the amount of focus, time, energy and resources” being devoted in the city to fight drugs, Barlow said, adding Oswego will continue to work with the county’s task force.

Later this spring, plans are to erect a 1,000-square-foot outdoor fitness court at Breitbeck Park. It’s designed for adults, but can be used by those 12 and older, Barlow noted.

The police department will participate in the 30X30 program, a police force recruiting initiative focused on hiring and advancing more women into local policing.

“Our goal is 30% of the Oswego Police Department being female by 2030,” the mayor said.