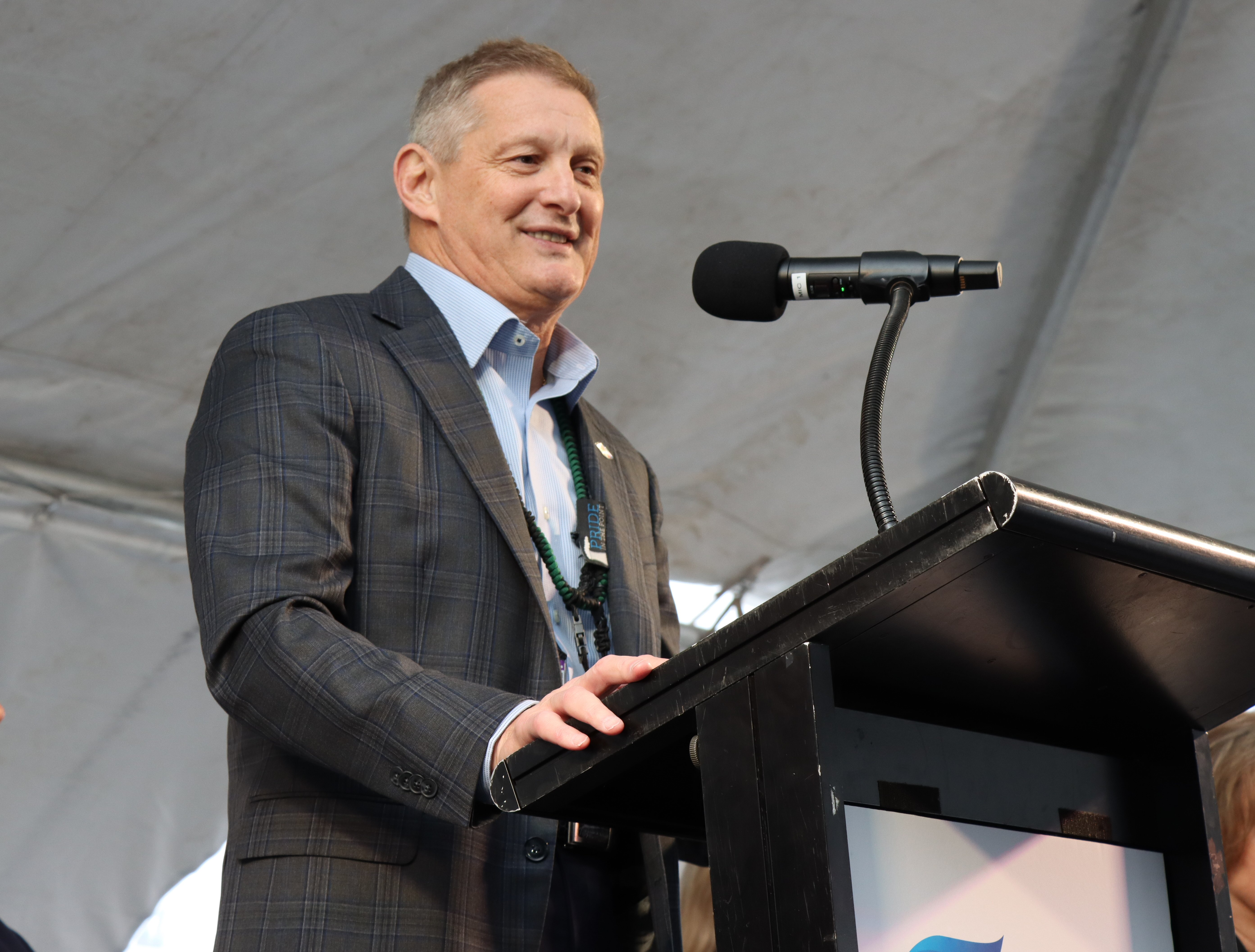 Pete Orphanos speaks at the event

Leaders from the U.S. Department of Energy, the New York State Energy Research and Development Authority and the New York State Public Service Commission joined Constellation leaders and employees at Nine Mile Point Sept. 28 to celebrate progress on the nation’s first nuclear-powered clean hydrogen production facility that will begin production by the end of the year.

“Clean hydrogen is an essential tool in addressing the climate crisis, and in a few short months we will demonstrate to the world how essential carbon-free nuclear energy is to unlock its potential,” said Joe Dominguez, president and CEO of Constellation. “Building on the vision and strong support from DOE and NYSERDA, we are eager to help develop the technology and infrastructure needed to build a clean hydrogen economy, create jobs and secure our domestic energy security.”

Last year, DOE approved moving forward with construction and installation of an electrolyzer system at Nine Mile Point, to separate hydrogen and oxygen molecules in water as part of a $5.8 million award from DOE.

In addition, NYSERDA recently announced $12.5 million in funding to help demonstrate hydrogen fuel cell technology at Nine Mile Point to provide long-duration energy storage for the electric grid. Hydrogen fuel cells can produce electricity with only water vapor as a byproduct, making them a clean source of reliable backup energy to power the grid.

The hydrogen fuel cell project at Nine Mile Point is currently being designed and is expected to be operational in 2025.

When produced on a large scale, clean hydrogen can be used to make next-generation energy for otherwise hard-to-decarbonize industries like aviation, long haul freight, steel making and agriculture.

The clean hydrogen production and storage projects underway at Nine Mile Point will demonstrate the viability of hydrogen electrolyzer and fuel cell technologies, setting the stage for possible deployment at other clean energy centers in Constellation’s fleet.

As part of its broader decarbonization strategy, Constellation is currently working with public and private entities representing every phase in the hydrogen value chain to pursue development of regional hydrogen production and distribution hubs.

Alice Caponiti, deputy assistant secretary, Nuclear Energy Office, DOE, said, “Nuclear power has historically been known as a baseload energy provider because it is the most reliable clean energy source in the country. As we move forward, together with fluctuating renewable energy sources, in meeting the President’s bold vision for a 100% clean electricity generation mix by 2035 and a net-zero economy by 2050, nuclear power will evolve to support both firm and flexible capacity and it will play an important role in developing clean hydrogen affordably and at scale. We are pleased to see the progress being made to start producing clean hydrogen here by the end of the year.”

“As we look to achieve New York’s ambitious decarbonization and clean energy targets, projects like Nine Mile Point are critical to ensuring that stored renewable energy and other zero-emission energy sources are available for long periods of time and can be utilized to contribute to a reliable power grid,” said Doreen M. Harris, president and CEO, NYSERDA. “NYSERDA is proud to partner with Constellation to demonstrate how this project can help reduce emissions and improve air quality for the benefit of all New Yorkers.”

“It’s great to see the U.S. and New York take these big steps forward to embrace clean hydrogen production and long-term energy storage,” said Steve Szymanski, vice president, Nel Hydrogen, the manufacturer of the electrolyzer to be used at Nine Mile Point. “Clean hydrogen is an emerging industry that will create a lot of jobs and help us lower emissions in industries that produce up to a quarter of global carbon emissions, making it an essential resource in the fight against climate change.”