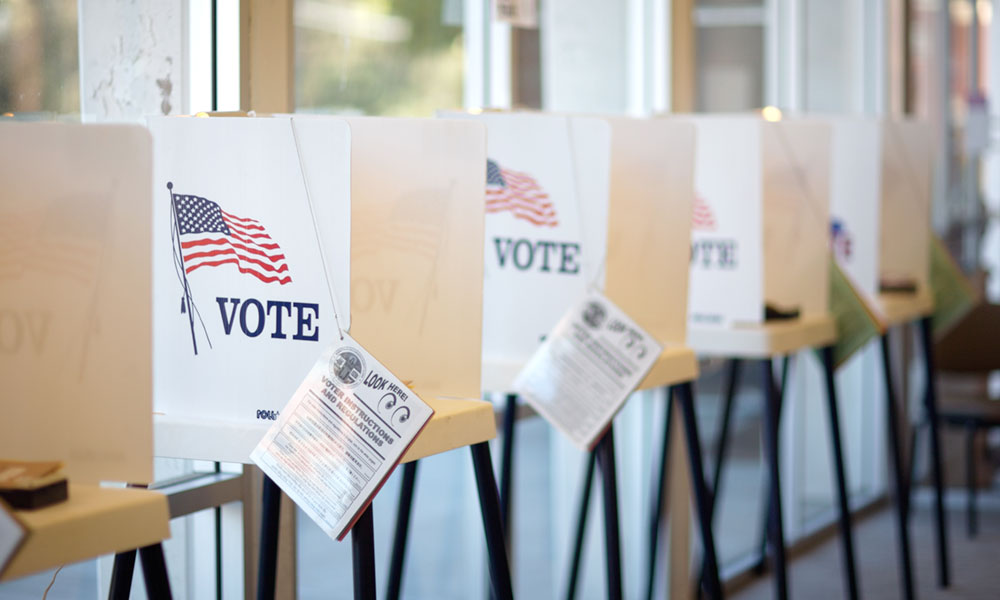 Most years Marty Ours looks forward to Election Day. The 77-year-old Liverpool woman is a self-described political junky who has served as a poll worker for more than a decade.

But this year Ours will be absent on Election Day.

A family member has a health condition that suppresses their immune system and Ours is concerned she could infect them if she gets sick while working at the polls.

Election officials are confronting a manpower crunch that’s been exacerbated by the COVID-19 virus and the vulnerability of their workforce. A significant number of poll workers, also known as election inspectors, have sidelined themselves this year out of concern for their health or the health of family.

Poll workers have long skewed older than the general population. Around six in 10 poll workers nationwide are over 60 years old, according to a Pew Research Center analysis of government data. Roughly a quarter are over age 70. And health experts have warned that older adults and anyone with an underlying medical condition is at a higher risk of developing more serious complications from COVID-19.

“It already caused an issue this primary,” says Dustin Czarny, Democratic commissioner for the Onondaga County Board of Elections. “We had a lot of longtime poll workers who decided, at least during the primary, they were not going to work.”

Czarny says the Board of Elections couldn’t conduct in-person training earlier this year to bring in new people to replace workers who decided to stay home. Traditionally low turnout for primaries allowed them to get by with fewer workers than needed for a general election in a presidential year.

In-person training classes have since resumed and election officials spent much of the summer recruiting new workers in an effort to offset the loss of veteran poll workers. Peggy Bickford, Republican commissioner for the Oswego County Board of Elections, says that over the summer the Republican Party heard from nearly 50 poll workers who planned to sit the election out. She says Democrats have a harder time recruiting because there are fewer registered in the county. In Oswego County, each of the 110 election districts is supposed to have two Republicans and two Democrats, for a full complement of 440 election inspectors. In Onondaga County, officials need more than a thousand total inspectors to fill every position.

“Poll workers have never been in an abundant surplus to begin with,” Czarny says. “We’re already having trouble recruiting them in good years.”

The part-time job favors retirees since poll workers need to be available on a weekday. Workers must attend a three-hour training class each year and pass a test. On Election Day workers typically start at 5 a.m. and don’t finish until after 9 p.m. Election officials typically frown on split shifts, insisting everyone stay the whole day. Pay varies by county, but is usually in the range of $200.

In the past election officials relied more on government employees for whom Election Day was a holiday. But over the years many unions have traded the holiday away for other days off. Making Election Day a paid holiday would make it much easier to hire poll workers, Czarny says.

Recruitment this year might have been helped somewhat by the high unemployment from the pandemic. Regardless, election officials planned an aggressive recruitment effort with the hope of attracting new and younger workers. They’ve reached out to local party officials to identify interested people and begun utilizing voter databases and social media.

In Onondaga County Czarny says officials plan to roll out a pilot program to allow some workers to put in a half day, especially those that have a difficult time getting all of Election Day off from their regular jobs.

The program would certainly be of interest to Sandy Lovell. A self-employed caregiver, Lovell, 67, usually works the polls in Liverpool with Ours. This year Lovell seriously considered sitting the election out, but not because of the pandemic.

She was fairly confident that if she took measures to protect herself — wearing a face mask, using hand sanitizer and maintaining social distancing – she could minimize the risk. Instead, it was the length day that caused her to have second thoughts. The 15-hour day is draining, she says.

Ultimately Lovell decided to work this year because the Board of Elections continues to have trouble finding people. She says she has tried to recruit friends and neighbors without success.

Lovell also enjoyed her co-workers. For several years Lovell, Ours and a friend ran their polling place at the Liverpool Village Hall along with Gene Balcum, a milk truck driver and volunteer firefighter. Balcum, 59, says that despite a diverse background and age range – he’s the youngest – the group developed a good working relationship and grew close.

“We worked together really well,” he says.

Five years ago, Balcum got interested in working the polls after he read in the newspaper that they needed help. Since his job frequently included working weekends, Balcum could take time off for Election Day. He signed up and soon discovered something he hadn’t given much thought over the years while voting.

“The first class I went into I looked around and half these people were old enough to be my parents,” Balcum says.

Balcum says he was initially a little concerned about working the primaries until he saw the preparation the Board of Elections had made. They provided plenty of disinfecting sprays and hand sanitizers, he says, as well as written directions on how to sanitize the equipment and handle any situations that came up.

He says he doesn’t have any concerns about working Election Day, especially since he has worked through the pandemic and picked up a lot of tips on best practices at work.

“I’ve gotten into a real good habit of using a lot of hand sanitizer, a lot of disinfectant sprays,” Balcum says. “I’ve educated myself on how to personally take care of myself.”

For many poll workers the primaries earlier this year offered an opportunity to acquaint themselves with new COVID-19 procedures.

That was the case for John Mielcarski. The 83-year-old works as a poll site manager at the Jordan-Elbridge Community Center. His election experience goes back to childhood when he helped his father load and deliver padlocked wooden ballot boxes to the Board of Elections.

Mielcarski says during the primary all of his usual co-workers showed up and things went surprisingly smooth. They all wore masks and were careful to wipe everything down with disinfectant. Throughout the day they encountered just one person who refused to wear a mask. Mielcarski says he followed the training he received, taking the man to an empty adjacent room to vote without incident.

“So, we’ve already experienced that COVID test,” he says.

Election officials have sought to reassure voters and poll workers that they can vote and work safely. Bickford said the Board of Elections was limiting how many people could be in the building at each polling site and was hiring extra people to disinfect equipment throughout Election Day.

“We’re doing everything that we can to make them feel safe and if they don’t, we understand,” she says.

And what if more poll workers drop out before November? Bickford says the Board of Elections has consolidated districts in places like Oswego and Fulton to reduce the total number of polling sites. In a pinch, a polling site can open with just two workers, she says.

Whether or not voting goes smoothly may ultimately depend on whether the pandemic worsens before Election Day, Czarny says.

“Everything about this year has been a surprise,” he says. “What we can’t predict is does this come back in November, is there a second wave?”

30% of Adults in Upstate New York Skip Visits to Dentist