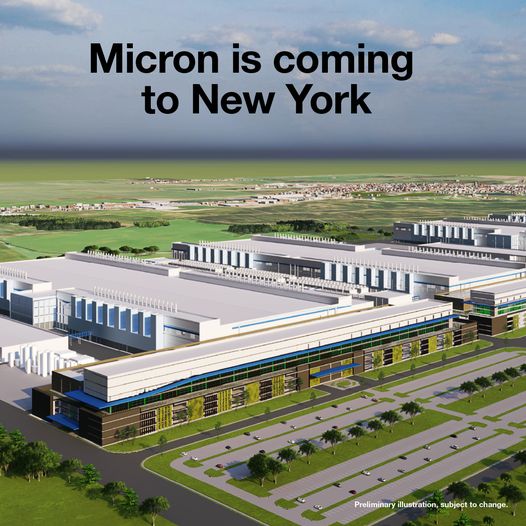 Today, Oct. 4, we announced plans to invest up to $100 billion over the next 20-plus years to build a new, sustainable, leading-edge memory #manufacturing fab in Clay, NY. ​​This is an historic moment for Micron and #NewYork, as we bring the largest private investment ever made in state history and the biggest leading-edge memory site announced in the U.S. to the Empire State, Micron posted on its Facebook page. We’re thrilled to come to Central New York, and we look forward to creating nearly 50,000 New York jobs, including approximately 9,000 high-paying Micron jobs, in a region with such a diverse talent pool and strong opportunities for partnerships with educational institutions, they added.

Micron Technology, Inc. is an American producer of computer memory and computer data storage including dynamic random-access memory, flash memory and USB flash drives. It is headquartered in Boise, Idaho.

This is the largest private investment ever made in New York state history, up to $100 billion over the next 20-plus years.

And, it is one of the largest industrial manufacturing investments in the history of the United States.

“The scale of this investment is truly without comparison. It will put our community at the forefront of semiconductor manufacturing and drive untold future projects, investments and innovation,” Simpson said.

“This is news we should all celebrate, particularly knowing that, for two decades, the leaders of this community have worked to create the kind of place that could support a project of this scale and achieve this win for Central New York and New York state,“ he added. “I am exceptionally proud that Micron noticed our history of self-led revitalization efforts and chose Central New York as the best place to make such a globally relevant investment. I am also incredibly proud of the work of our local, county, state and federal partners, who came together to land this monumental project.”

He is grateful to partners, including U.S. Senate Majority Leader Charles Schumer, Governor Kathy Hochul, Empire State Development, Onondaga County Executive Ryan McMahon and other leaders who’ve worked to ensure that the necessary legislation, site conditions and community assets were in place to secure this project.

“I am also proud of the team here at CenterState CEO who have worked tirelessly to support this attraction project at every stage. Our business attraction team supported site visits and hosted company representatives multiple times over the past 18 months.

“We worked alongside federal leaders to ensure the CHIPS and Science Act was passed, and provided New York State’s leadership with key insights as it developed and passed new Green Chips legislation. And the company has looked to our expertise in developing workforce programs and strategies that are crucial to ensuring the project’s investments reach across our community equitably. Our team is anxious to continue working with Micron to ensure its long-term success here.”

In the coming weeks, CenterState will share more about Micron’s project and the transformational impact it will have on Central New York. Until then, please visit www.centerstateceo.com/micron to submit your questions about the project.