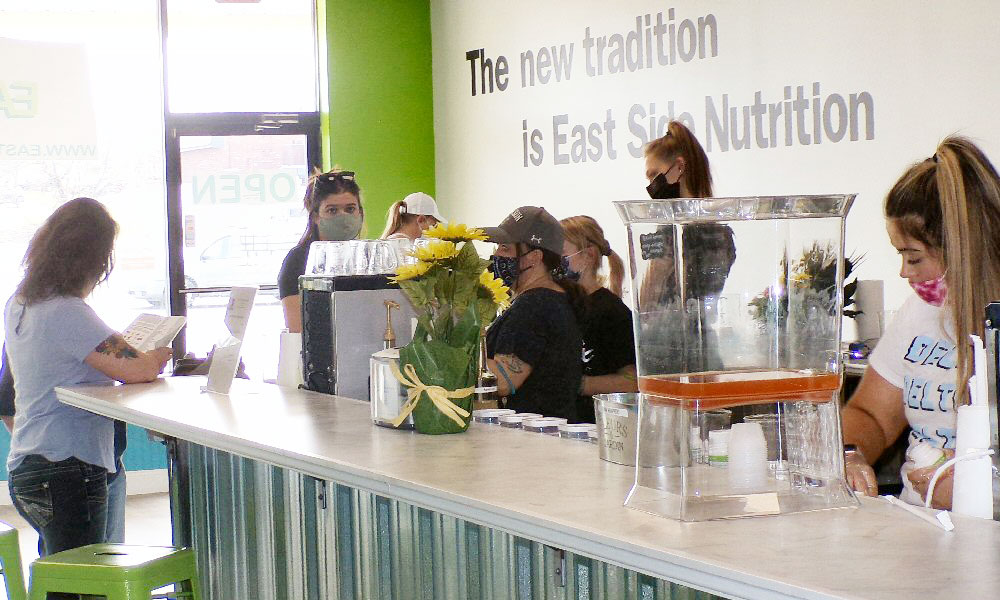 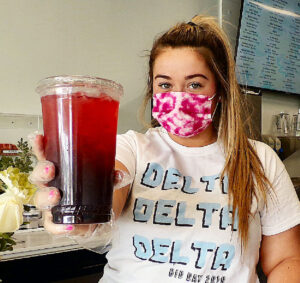 It’s not healthy to open a new business during a pandemic. Or, is it? Tricia and Leo Babcock opened Eastside Nutrition on April 6. It is located at 293 State Route 104 East in Oswego (the plaza just behind the Pathfinder Bank branch).

It is a Herbalife nutrition club that provides healthy meal options, free body composition testing and community events. Customers can also get paired with their very own wellness coach who will help them work toward their health and nutrition goals.

Despite a steady stream of walk-in customers during their first week, there were some glitches, the co-owners said.

For example, On Friday (April 9), they lost their entire network and didn’t have any way to ring out anybody.

“We had tons of people in here and we really could not do anything. We’re using way more ice than we anticipated. We anticipated about 200 pounds a day and we’re doing around 400 pounds a day. That’s kind of a good thing, it’s a learning process. We borrowed ice from The Mix. It’s going well, but there are things we’re working on during the first week,” Leo said.

They’ve noticed that everyone that comes in will stop in front of the two huge menu boards, stand and stare at the list of choices. The list is considerably long. Those boards will be moved to the opposite wall so people can read the items more easily and it will free up counter space for customers, Leo explained.

“We opened on Tuesday,” Tricia said

“Really, it was on Wednesday,” Leo said.

“Yeah, Tuesday was kind of like a slow, soft opening,” she agreed.

“We’ve known the Greens for many, many years. We got together probably before the pandemic happened,” Leo said. “I grew up with Billy, went to school with Billy, life-long friends. I know his wife very well, too.”

“I told Kathy we’d be interested if there was some way we could open up a club (like theirs). She said, ‘I’d like to take you up on that.’ Fast forward to about November (2020) and Kathy and Billy said, ‘it’s about time.’ I said time for what? They said time to open the store. And, I said, it’s a pandemic!” Leo continued.

Billy told him he wanted to be in the forefront of this business.

“So, we partnered together and jumped into the mix. The Greens have The Mix; we’re sister clubs,” Leo said.

Trisha recalled the time before opening the store.

“One day, we all sat down and discussed opening (our own place). Our daughter, Hailey, was extremely thrilled because she already had the experience behind her of knowing the products and how to manage a store. From there we had many restless nights trying to get everything figured out and organized to get approval to start finding a place and start constructing,” she said.

The Babcocks went out looking (for a location). They looked at places all over Oswego; they wanted to be near a gym.

“We were going to be up at the Lowe’s mall, but Planet Fitness moved down here. So this spot, the old UPS Jackson Hewitt facility, was open. We called the broker and they came down and showed us around. Bill and Kathy said this is where we want to be; even though it’s big and long. We don’t need all the space, but it’s right next to Planet Fitness. So it’ll pay off for us in the long-run,” Leo said.

“We ended up finding a gold mine spot, meaning we had Planet Fitness right next to us and we were going to be open early enough for the nuke plant people to be able to stop by and get one before they start their work day,” Tricia added.

“We’re trying to work with Planet Fitness as well as the nuclear plants and Novelis. We open at 5 a.m. They can pick up their tea or a shake in the morning before work and take it with them. They can call in, place orders ahead of time. They don’t have to get out of their cars, we’ll do curb-side delivery,” Leo agreed.

“We have room for seating and special events in the future. We’re going to put some seating back there, a couch and some chairs and tables,” Trisha said gesturing toward the wide open space. “A lot of people are asking us if we’re going to put a few small tables out front, like they do downtown. We’ll check into that.”

“It’s the newness,” Leo said about the steady stream of customers coming in to check out the business. “We’re not done finishing.  We had a soft opening and we want to get everybody’s feelings, fix any bumps in the road. We’ll make some adjustments. People will be able to come in and have little meetings here. Probably in the next month or so we will be able to accommodate that.”

They are a sponsor of the Make It Happen 20K (a series of four 5K races. https://makeithappenoswego.com/)

“We want the store to really emphasize health. This is healthy stuff. There is nothing bad in what you buy here, it’s all good stuff. We’re trying to promote that,” Leo said. “We’re getting in touch with the race series. The Oswego Little League Father’s Day 5K, the Out Run Autism 5K, the Buc Booster’s Go Bucs 5K and the Run for your Health 5K. All of these promote health and so what we’re going to do for the Little League run is we can’t have in-person groups together, but we can come here after the race.”

Leo is involved with Oswego Little League. He was the coach for the Police team for 15 years; their son and daughter were on his team. Bill and Kathy’s son, Billy, was also.

“Our daughter, Hailey, went on to play varsity softball in high school and decided to go to Oswego State to play as well. Due to Covid, they didn’t have much of a team. So she decided not to play at last minute,” Tricia said.

“Due to constantly having to run them around after school for sports and go to games, Leo coaching and both us having full-time jobs, we where forced to eat take-out food most nights for dinner, and, at times, lunch,” Tricia said. “Leo got up to his max weight at 300 pounds and me at 190.

“One evening, we both decided we needed a change, a healthy change. Knowing Bill and Kathy opened The Mix, we went in for a consult with them. Kathy sat with us and got us signed up for the weight loss challenge. I ended up loosing the weight I wanted, plus more. Leo did as well.”

“After finding a building and starting construction, Leo, Hailey, Dalton and I started grinding out everything that needed to be done by deadlines and had countless meetings with Kathy and Bill and their team,” Tricia said. “Faster than we knew it, we were all ready and opening! The first day went great. We rocked big numbers that day and a lot of new customers! We also got to do our first tea service the first day of opening at our neighbors ARISE.”

“Our power teas have 24 grams of caffeine. It’s like a coffee but it’s not artificial caffeine, it’s natural. So you’re not going to get anything that causes a super high and then a crash. It works with your body, maintains a steady feeling,” Leo explained.

Nothing in any of their products is artificial, it’s all natural, he said. Powder, water and ice.

“Our goal is to have a meal replacement program,” he added. “I lost 125 pounds. I lost a lot of it by changing my habits. When I teamed up with Kathy, she helped me get the last 25 pounds off,” he said. “I replaced my breakfast and lunch with protein shakes. I had a tea in the morning to help my digestion. It’s about 248 calories per drink. You’re replacing a meal. You’re not trying to supplement it. The protein will fill you up. It fills you up, gives you everything you need.”

“We have four people working per shift.