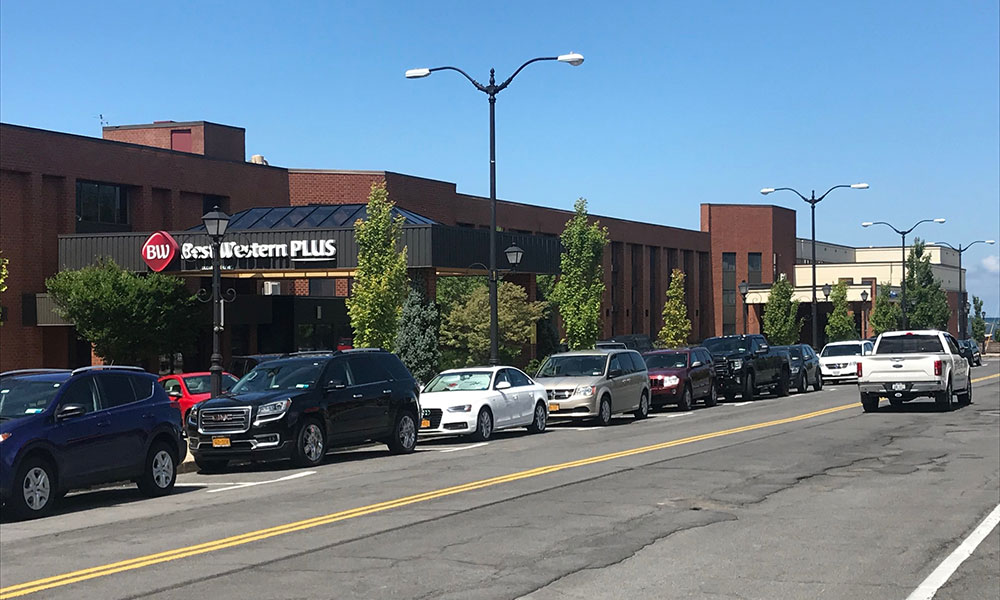 Broadwell Hospitality Group, owner and operator of the center, got hit on several fronts as the pandemic cut deeply into bottom lines.

Sheffield said the center has had to cancel all 2020 events.

“However, we just recently started hosting representatives once more for groups and associations in the state for tours of all of our venues for future events,” he noted. The center is booking for 2021, 2022, and even looking ahead to 2023.

“As with many of our properties, we have taken advantage of the time to upgrade and renovate,” he said. The hotel and conference center recently upgraded anti-virus and tech capabilities respectively.

Meanwhile, all weddings planned at both Alex’s on the Water and Bay Shore Grove are cancelled this year.

“That being said, couples are still planning for the future. We have had some couples inquire about August and October, for example, but everyone involved realizes that things can only be ‘penciled’ in as the situation around such events is in a constant of flux,” he said.

With weddings being a time of celebration, current mandates limiting events to 50 people, masking and social distancing requirements, the social aspect of weddings is greatly diminished, Sheffield noted.

Alex’s and G.S. Steamers Bar &B Grill are adjusting on a daily basis, he said.

“They are both open and serving as many folks as we can, but it has been an adjustment,” he said.

Sheffield said both restaurants have had to put in many new protocols regarding mask requirements, distance between tables, how silverware and condiments are handled, cleaning protocols, bar activity, customer movement and flow.

“We are fortunate, however, that both restaurants have outdoor dining facilities and a lot more overall space available than many of the restaurants here in town,” he said. “Our indoor-outdoor capacity and seating space potential is much greater than many when you factor in the distancing requirements.”

During the beginning of the crisis, Steamers was carrying the load with take-out options that included a modified menu and family meal deals which the public responded to positively, Sheffield said.

“A positive that came out of this for Steamers was that we introduced online take-out ordering for the first time ever,” he said. “It has been received well and will be a mainstay from here on out I believe. The Steamers’ bar area was also refinished and looks sharp.”

Best Western Plus and Quality Inn & Suites Riverfront initially “took a beating” as did all hotels in the region, Sheffield said.

“There was no one traveling, events such as Harborfest which fills all the hotels and restaurants locally were cancelled, class reunions were cancelled, everything just stopped and was cancelled,” he said. “We had a few workers for some of the larger local industries staying with us, but not many.”

Also, new policies, cleaning procedures and protocols had to be developed and put in place that met both state mandates and corporate requirements, and staff had to be brought up to speed, he added.

In July, folks started to book rooms and take mini-vacations and “staycations” as things opened up, Sheffield said.

“People are starting to travel once more — albeit cautiously — but they are traveling. For the most part, folks are adhering to state mandates,” Sheffield said.

Broadwell Hospitality Group is in the midst of constructing a $5 million indoor water park that is attached to the Quality Inn.

Construction has slowed and its opening date has been pushed back as a result to date to be determined.

The Captain’s Club Health & Fitness Center, a full-sized health club that is part of Best Western Plus, is available not only to all hotel guests, but for the as well.

“The irony is that right before everything was closed, we invested quite a bit into upgrading the weight room side of the club and as of now, no one can use it,” he said.

During the down time, however, the spa portion of the club — which features a pool, sauna, steam room, hot tub, and lounge area— was re-grouted, re-carpeted, and re-sanded, while significant changes were made to the lounge area on the waterside.

“We know there is a group of gym owners that brought a lawsuit against the state for not allowing them to re-open and we are of course watching that play out very closely,” he said.

In terms of customer compliance with “New Normal” mandates, Sheffield said for the most part, it has been favorable.

“The problem is with the very few customers that do not want to comply which has become less of a problem as people adjust.  Some of them have gotten downright belligerent,” he said. “Most people respond to a polite and gentle reminder and follow the mandates. As I said, it is those few that don’t want to comply that turn it into a potential confrontation that we don’t want.”

To head off potential problems, the team at Broadwell Hospitality has made it clear on social media not only what the mandates are, but also what the staff is doing to ensure safety of guests.

“We have increased visible signage at both hotels and restaurants, and we have even placed signs on the docks for people to see when they get off their boats at our waterfront areas,” Sheffield said. “Anyone who checks into the hotels is given a disposable handout that has all the mandates and safety information on it.  We also have a similar handout to be given to our restaurant patrons when they are seated at a table.”

Sheffield said what some patrons don’t realize is the business must follow state mandates.

“If a customer, who ultimately is not under our control, chooses to not follow the mandates, then the businesses in our industry can be shut down, have their liquor license taken, fined, or experience a number of bad things,” he said. “If that happens, then a local business could close, which in turn means people lose their jobs. It can create a very negative outcome economically that can have a very destructive impact on a small economy such as ours.”

“Instead of having one large conference of 150 people, organizations may opt to have three mini-conferences of 50 attendees each,” he said. “With everything still in such flux, we have only had very preliminary discussions about that.”